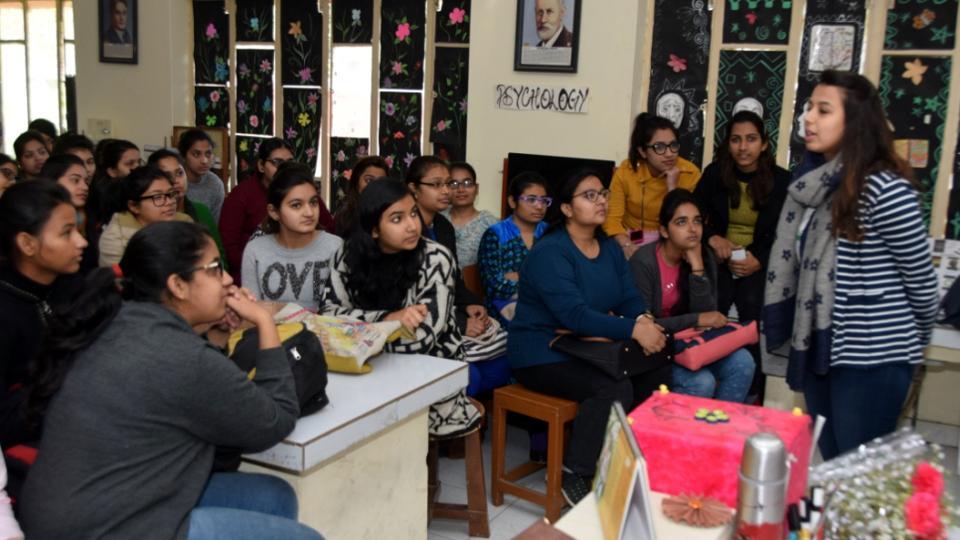 How much control do Indian women have over different aspects of their lives?

Not much, according to the Indian Human Development Survey (IHDS), conducted by the University of Maryland and the National Council of Applied Economic Research in 2004-2005 and 2011-2012.

Overall, 73% of the women surveyed reported that their parents or relatives alone chose their husbands, while as few as 5% of women reported to have had sole control over choosing their husbands.

A similar survey for men has not been conducted. 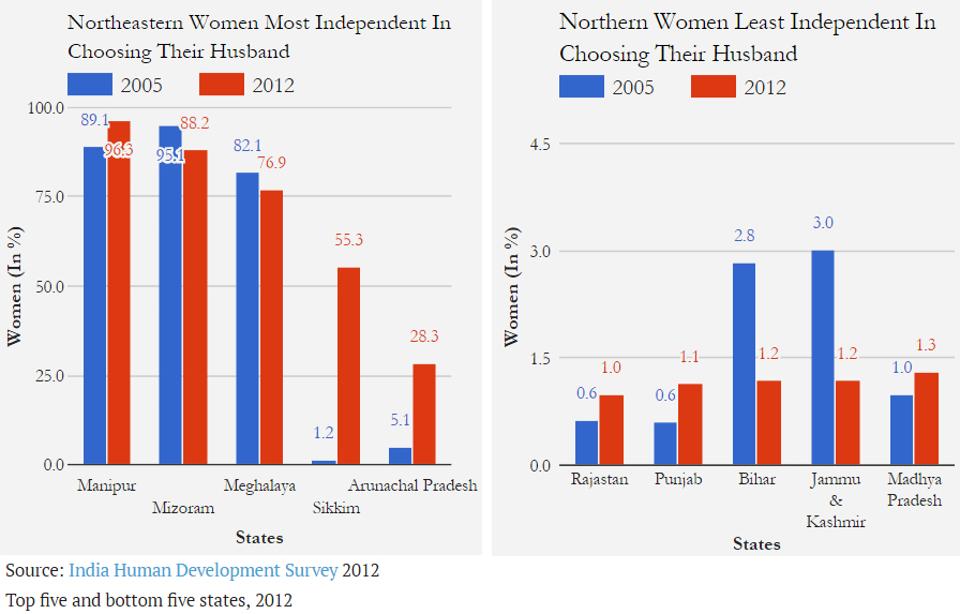 Limited control over life decisions extended to visiting a healthcare centre, and a grocery store.

Further, 58% of women reported that they needed permission to visit the local kirana (grocery) store, compared to 44.8% in 2005.

Such restrictions are also echoed in other indicators. For instance, only 27% of Indian women are in the labour force, the second-lowest rate of female labour-force participation in South Asia after Pakistan, as IndiaSpend reported in April 2016.

Women, however, seemed to have control over what is cooked in the house, a decision that 92.89% women reported making everyday. About 50% reported that the husband took part in deciding what to cook, highlighting the gendered nature of household chores. 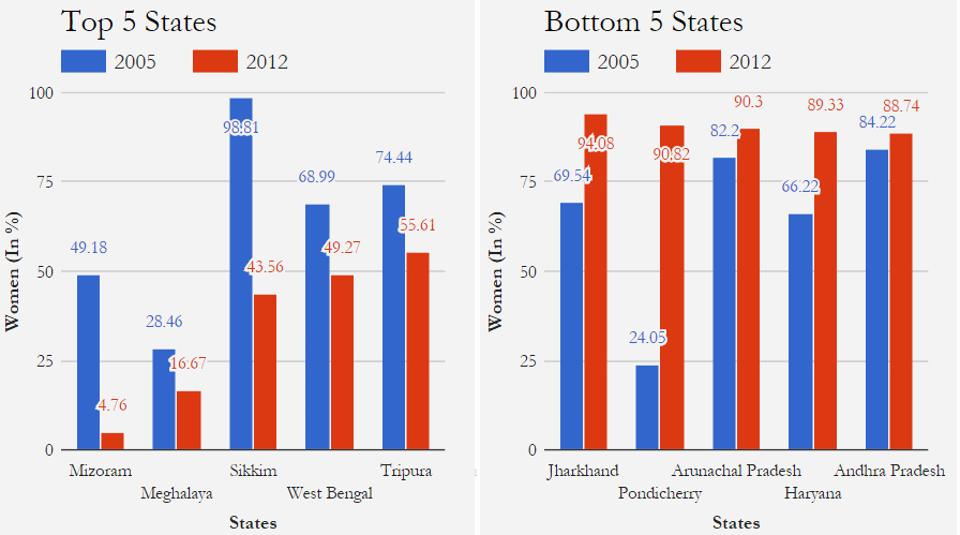 In the Same States 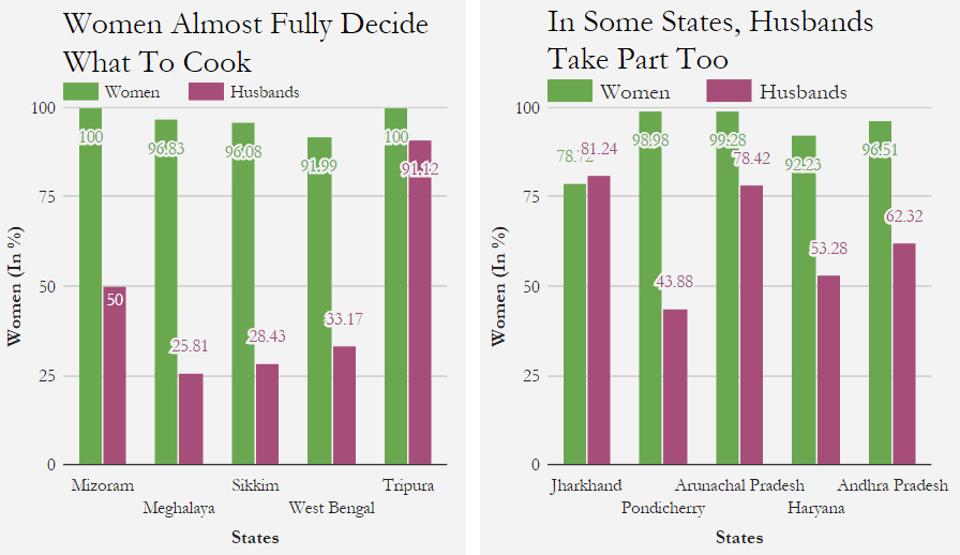 More women chose their own husband in states in north-eastern and southern India as compared to northern India, as per 2012 IHDS data.

This highlights the “arranged” nature of marriages in India, a process in which prospective partners usually meet for the first time with the intention of getting married, after their family vets the spouse-to-be, and the match is backed by the support of their extended social network.

The top five states, which weren’t necessarily doing well in 2005 like Mizoram, Sikkim, Tripura and West Bengal, have improved since then. However, more women in the bottom five states reported they had to ask for permission to visit the health centre in 2012 as compared to 2005.

Does higher literacy lead to greater decision-making power? Not really

A woman’s power to make decisions regarding marriage, and visits to a healthcare centre are not correlated with literacy at the state-level, or to the sex ratio (the number of females per 1000 males), suggesting the role of social norms, which might differ by state.

For example, in Chattisgarh, which has one of the highest sex ratios in the country (991), only 7.57% women said they did not need permission from another family member to visit a healthcare center. 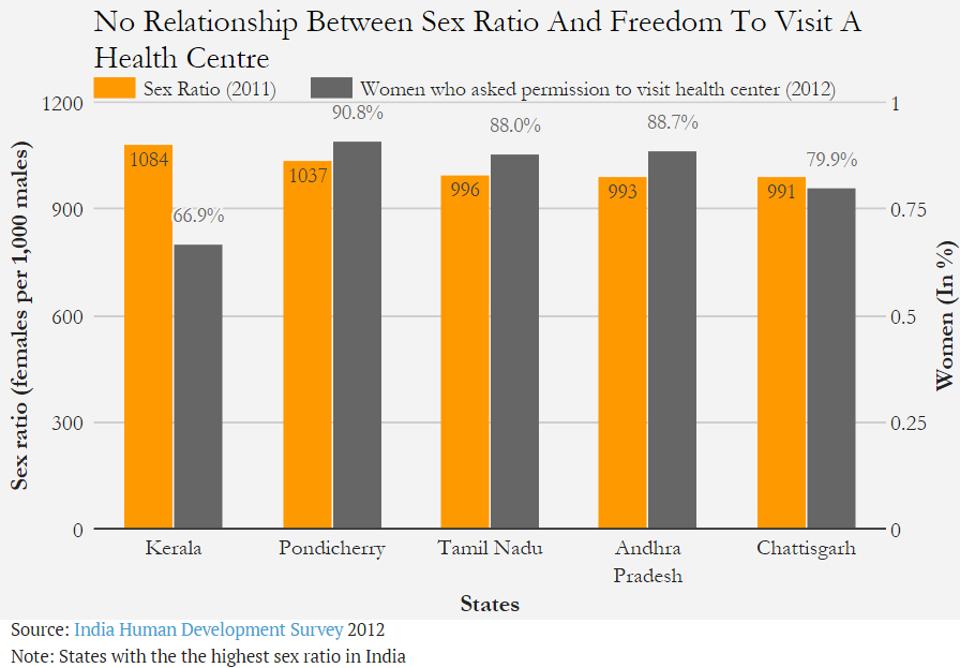 This paradox is not being observed for the first time–despite female literacy levels being higher than before, the child sex ratio (indication of son preference) in India is at its lowest since 1951, as IndiaSpend reported in December 2016.

“The bias against daughters can only end if women’s education is accompanied by social and economic empowerment”, concluded a study conducted over a period of 30 years in Gove, Maharashtra, by Carol Vlassoff, a professor at the University of Ottawa, as IndiaSpend reported in December 2016. 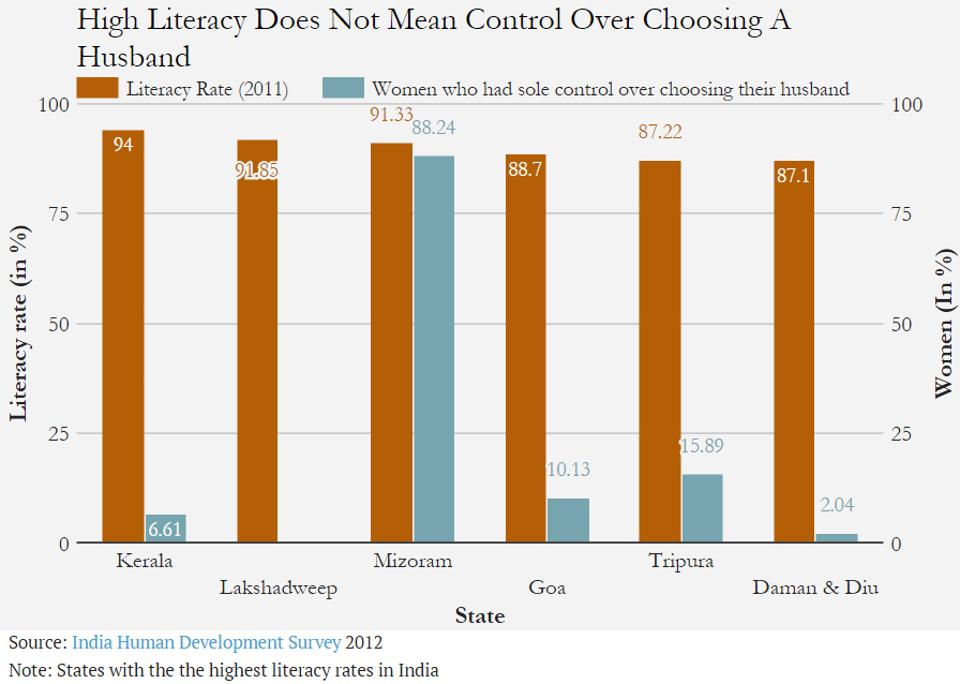 “Cultural climate also plays a role”, said Kavita Krishnan, secretary of the Delhi-based All India Progressive Women’s Association, which works on issues such as reservation for women in Parliament and violence against women. “In and around Delhi, there is no doubt a more rigid patriarchal culture that is hostile to women’s sexual autonomy–this may be far less the case in Meghalaya”, she explained.

“This study shows that denial of autonomy is in itself one of the central problems for Indian women. This problem can’t be addressed by literacy alone, and governments need to address the issue directly”, Krishnan added.

(Garg is a Research Associate with the University of Michigan.)