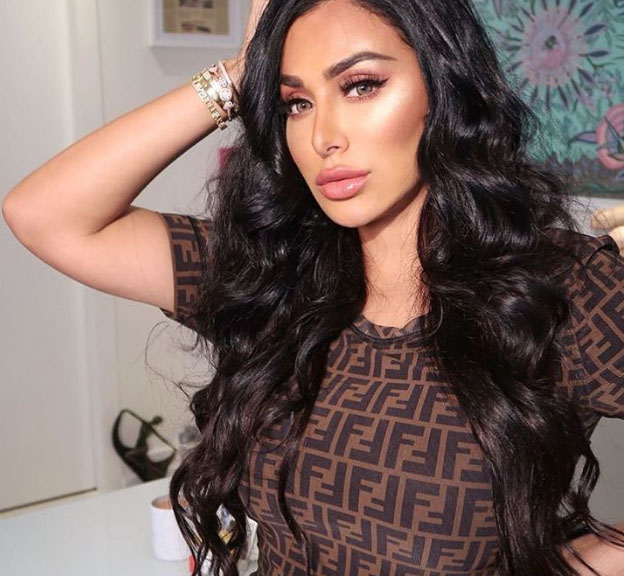 As representation becomes a driving force in the beauty industry, there has been an influx of Muslim-owned beauty brands spearheading inclusivity in recent years. And in today’s divisive political climate, their ever-growing presence is made all the more impactful. Below, we list 7 empowering beauty brands helmed by trailblazing Muslim women.

Huda Beauty
The American-born daughter of Iraqi immigrants, Huda Kattan is a beauty-blogger-turned-entrepreneur who founded her cosmetics empire in 2013 with her cult favorite lashes and false nails. Today, the Huda Beauty range boasts a complete line-up of more than 140 products, including liquid lipsticks, lip liners, eyeshadow palettes, foundation, highlighter palettes, and a loose finishing powder. With 26.1 million Instagram followers (and counting), the Dubai-based businesswoman has established herself as one of the most influential beauty moguls in the world, and was recently named as one of America’s wealthiest self-made women by Forbes magazine, coming in at number 37 on the 60-woman list.

Glossy Make Up
Natasha Zaki is an English-Egyptian makeup artist who is based in Dubai. The beauty maven has worked with legendary makeup artist Pat McGrath, as well as made up the faces of international mega-models such as Vogue Arabia cover star Jourdan Dunn, and Cara Delevingne. She launched Glossy Make Up, a range of brushes (and a blending sponge) and false eyelashes named after her favorite cities, a couple of years ago.

Farsali
Farah Dhukai is a Toronto-based beauty blogger of Indian descent known for her eccentric DIY videos on Instagram, which she routinely shares with her 6.1 million followers. Unlike a lot of beauty gurus, Dhukhai is very vocal about her struggles with acne and combination skin, which led her husband Sal Ali to create Farsali as a solution to her beauty concerns. The skincare brand, which launched in 2015, is best known for its Rose Gold Elixir and Unicorn Essence, two oil-serum mixtures that you dispense via a dropper and blend into your skin before your makeup application.

Ex1 Cosmetics
Fed up with her never-ending quest for a suitable foundation shade for her olive-hued complexion, London-based Farah Naz decided to take matters into her own hands and launch Ex1 Cosmetics. Shortly after unveiling the range of inclusive concealers, foundations, pressed, and loose powders, the biochemist-turned-entrepreneur’s formulas have found fans in a number of olive-skinned beauties including Nicole Scherzinger, Priyanka Chopra, and Chrissy Teigen.

K7L
K7L (a play on the Arabic word Kohl) is the brainchild of Areej Sultan Al Essa, who launched her completely cruelty-free makeup line in an effort to be more inclusive to Arab women. The comprehensive offering (there are over 500 products to choose from), which launched after a decade of meticulous market research, includes non-toxic nail polishes, cream eyeshadows, lightweight eyelashes, and long-wearing lipsticks that last up to 24 hours. The foundations come in 15 different shades that all suit Middle Eastern skin tones, which means one needn’t mix two or three different formulas to achieve a suitable finish.

Prismologie
Prismologie is a unique and vibrant bodycare brand founded by Kuwaiti mother and daughter duo Sheikha Fatima and Intisar Al-Sabah, who aim to give women access to products that will enhance their daily lives. The sheikhas believe color and mood are intimately linked, with the brand’s products categorized into six distinctive hues: white for purity, yellow for energy, pink for happiness, green for restoration, red for vigor, and indigo for relaxation. The colorful range includes multisensory body lotions, shower gels, hand and foot creams, as well as body scrubs and oils.

Arcadia
Following training as a perfumer at The Cotswold Perfumery in England, Amna Al Habtoor established her fragrance label, Arcadia, in 2016. Each of the cruelty-free, made-in-the-UAE scents is inspired by genuine encounters. For instance, for her debut collection of fragrances, Al Habtoor, who comes from an entrepreneurial family (her father Sultan Al Habtoor is the president of Habtoor Motors) took inspiration from memories of her late mother. Meanwhile, the follow-up range, The Dark Series, was an exploration of raw human emotions.