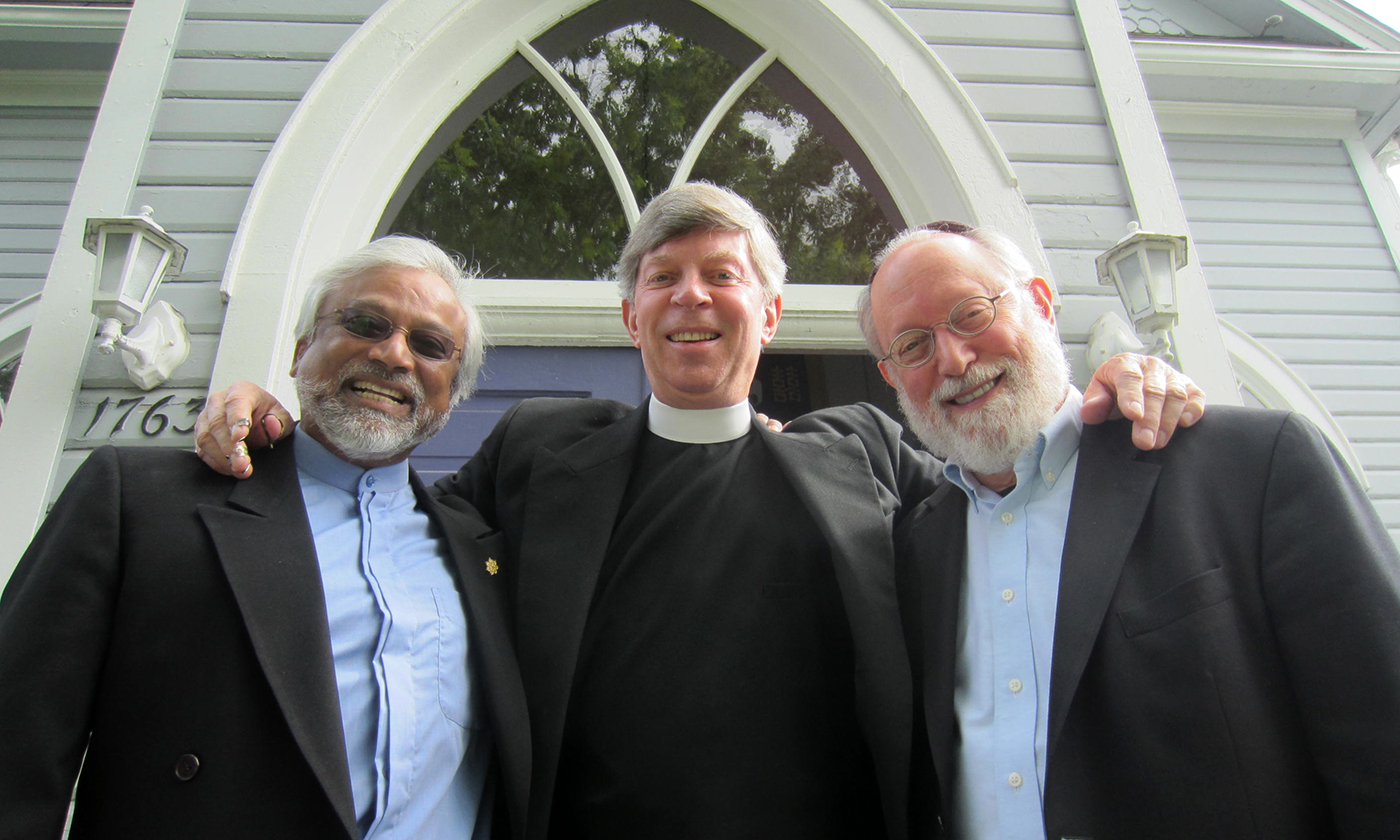 A rabbi, a minister, and an imam walk into a bar. No, really. Since 9/11, three religious leaders in Seattle have been meeting for sometimes “vigorous” discussions, lecturing together, and even doing joint spiritual teaching. Rabbi Ted Falcon is founder of Bet Alef Meditative Synagogue, Reverend Don Mackenzie is minister and head of staff at the University Congregational United Church of Christ, and Jamal Rahman is a Muslim Sufi minister at the Interfaith Community Church. And that time they walked into a bar? It was to discuss a book they co-authored, Getting to the Heart of Interfaith: The Eye-opening, Hope-filled Friendship of a Pastor, a Rabbi and a Sheikh. The three are now known as the Interfaith Amigos.

Sarah van Gelder: How did the three of you start working together?

Rabbi Ted Falcon: When 9/11 occurred, I called Jamal, and the two of us did a Shabbat service together. Since then, we’ve taken part in each other’s services, and it has become natural to work together.

When one awakens spiritually, there is an awakening to inclusivity. You start to perceive that each authentic spiritual path is an avenue to a shared universal. To deepen means to explore that territory together along with the ethic that naturally flows from it.

Sarah: Had you done those exchanges before 9/11?

Brother Jamal Rahman: Not much. After 9/11, as a Muslim, I felt a strong need for such a community.

Ted: A lot of attention at that time was focused on the perpetrators of 9/11 as representative of Islam, and we wanted to counteract that. We needed to put public faces on mutual understanding between our faiths.

Ted: Right. He has a remarkable sensitivity and directness. The three of us complement each other in an interesting way. Don is far more linear than either of us. And we need that; Jamal and I are much more apt to ramble, but we’re also more spontaneous. Part of what we taught Don was to talk without notes.

Reverend Don Mackenzie: I’m very much a student of my colleagues when it comes to spirituality and mysticism, and I am learning to catch up because it is the spiritual substance that carries religion forward.

Ted: I think spirituality holds the key to the deep healing that is required in our world. My experience with Jamal and Don is a continuing deepening of my appreciation not only of their traditions, but of my own.

Sarah: The three of you went to the Middle East together. What was that experience like?

Jamal: When Brother Ted invited me to go to Israel with this 44-member group, I was particularly keen to visit the Dome of the Rock in Jerusalem. That is where the Prophet Muhammad ascended seven levels of heaven after his astonishing night journey from Mecca to Jerusalem. Why didn’t the Prophet ascend to heaven from Mecca itself? Why did he have to go all the way to Jerusalem and then ascend seven levels of heaven? One reason, Muslim sages say, is that for heaven to come to Earth, the house of Ishmael and the house of Isaac must be united. And I witnessed that need very clearly on this trip.

The next major site for me was the Holocaust memorial. There I realized—in a very stark way—that when, as the Quran says, one’s ego is untamed, one can stoop to the basest behavior. The memorial shows with heart-breaking clarity what we humans are capable of if we don’t do the essential work of transforming the ego.

The third powerful site for me was the concrete wall that seals off the West Bank from Israel, in effect isolating the Palestinian town of Bethlehem from all the surrounding communities. What a difference from the Wailing Wall, which exudes piety and devotion! This political wall screams of pain and injustice.

Ted: I have a deep love for Israel. I grew up with the Middle East prominent in my life. I have long been a supporter of a Jewish state and a Palestinian state. I can be extremely critical of Israeli positions, but sometimes I find myself having to defend them, when the criticism comes from a place of wanting to abolish the state of Israel, rather than wanting to find ways of establishing peace.

On this trip, I was particularly concerned about what it would be like for Jamal. There were no other Muslims who were interested in going on the trip. Jamal was profiled at the airport when he arrived in Israel; he was pulled out of line and questioned.

Jamal: I showed the passport officer a flyer of the three of us doing an interfaith, inter-spiritual program, and she kept saying, “A Rabbi, a Muslim, a Christian pastor? This is good, very, very good.” She took it upon herself to guide me through all the procedures, escort me to a supervisor, wait with me in line, and her constant mantra was “Don’t worry, I’ll take care of you. This is good, very good.”

Ted: Two images were important to me during our trip. Many churches are built on places where a great teaching of Jesus occurred. But, the church buildings actually hide the place where something happened. And it came to me that all our faiths do that. There‘s something in the institution itself that inhibits the original, spiritual purpose for which that faith was founded.

The other image happened on the last afternoon of our tour at the Sea of Galilee. After our teachings, we each invited participants to experience a ritual from our faith tradition. Jamal was doing the Muslim ablutions before worship, Don was doing either a baptism or a blessing, and I was doing a symbolic Mikvah, which is a ritual bath. We were all using the same water, the water of the Galilee, and I was aware that some of the same water molecules were there when Jesus was there, and when Abraham was there.

As we all shared the same water, it seemed symbolic of the nourishment, the universal presence, the spirit that cuts across the separations in which deep healing can be found.