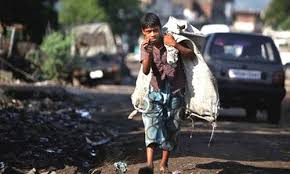 ISLAMABAD: More than a decade after June 12 was declared ‘World Day Against Child Labour’, over 12.5 million children in Pakistan are involved in child labour, according to a statement issued by the Child Rights Movement (CRM) National Secretariat.

The statement cites an ILO report of 2004 which said that 264,000 children in Pakistan were then employed as domestic help.

“There are 8.52 million home-based workers in the country, according to the figures released in the National Policy on Home-Based Workers, the number of child labourers up to the age of 10 years is around 6 million. This staggering number requires immediate action by the federal and provincial governments,” the statement says.

Under the Sustainable Development Goals (SDG), Pakistan has committed to take immediate and effective measures to eradicate forced labour, modern slavery and human trafficking as well as secure the prohibition and elimination of the worst forms of child labour, including the recruitment and use of child soldiers and by 2025, end child labour in all its forms.

According to the statement, a large number of children still constitute a significant part of the labour force in Pakistan. Legislation relating to child employment are still not aligned with Article 25-A of the Constitution which gives each child a right to education and the employment of children remains unaddressed, particularly in sectors like agriculture, factories, small car workshops, shops, hotels, cinemas, vending on the streets, the fishing industry, mining, brick kilns, weaving, bracelet making, packing and construction etc.

The statement claims that a large portion of these children are employed through an informal economy in the street, in private structures or in their homes, which also deprives them of any form of safety and recognition.

Denying children their fundamental right to be educated between the ages of five to 16 exposes them to health hazards, hampers their development and puts them at risk to other forms of violence, which may also be physical, psychological and sexual, the statement says.

It goes on to say that children in the labour environment are highly vulnerable to exploitation including commercial and sexual as well as trafficking.

“We, Pakistani citizens, cannot wait any further to provide those little citizens with respect and decency and cannot reasonably agree to sacrifice a significant portion of our next generation if we wish to create a prosperous Pakistan in line with SDGs and with the challenges of the 21st century. We therefore demand to the Pakistani government at provincial and national levels to take steps to abolish child labour,” the statement says.

It suggests amending and aligning child employment acts and other relevant laws with Article 25-A, to execute the ILO conventions ratified by the country and to arrest and prosecute all those employing children.

CRM has also urged the government to increase budget allocations for education so that quality education is available to all children in Pakistan and to enact the National Commission on the Rights of the Child Bill, which is still pending in the National Assembly so that child right violations linked with child labour can be monitored and addressed.