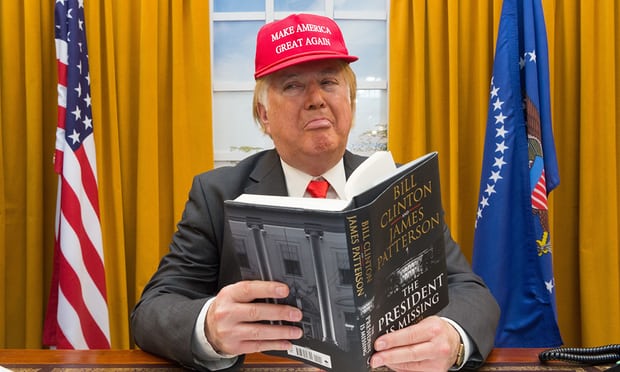 From a distance, the only thing that separates Donald Trump from the fake-tan smeared impersonator posing at London book fair is that this one is holding a book. The Trump-a-like has been brought in by Penguin Random House to promote The President Is Missing, a thriller co-written by James Patterson and former US president Bill Clinton. Holding up a fake copy of the book – it isn’t due until June – in the middle of a fake Oval Office (complete with Russian dolls on the table and Diet Coke in the drinks globe), the similarities between Trump and his doppelganger stop at pout and paunch alone; everyone is pleased to see him, and stretch for selfies.

Clinton and Patterson’s thriller is possibly the starriest book at the fair, despite being announced months ago. But this publicity stunt is emblematic of the cash and publicity pizazz on display at London book fair each year. A lot of what we end up reading coming through the fair 18 months before, to be snapped up by publishers and eyed by film and TV studios for possible adaptations. And Trump-a-like aside, it seems politics was never far away from anyone’s mind this year, with many of the biggest deals going to feminist fiction: novels starring female leads, navigating dangerous worlds with agency, off the back of the huge success of the TV adaptation of The Handmaid’s Tale and conversations born of #TimesUp and #MeToo.

There’s Chandler Baker’s The Whisper Network, about four women scheming to take down a sleazy colleague before he becomes CEO; The Illness Lesson by Clare Beams, a novel set in a 19th-century Massachusetts girls’ school, where the students develop strange, shared symptoms; and Joanne Ramos’s The Farm, where women conceive the children of an elite, receiving payment if they follow strict rules. Joining those is After the Flood, Kassandra Montag’s postapocalyptic novel about a mother searching for her daughter; Erotic Stories for Punjabi Widows, Balli Kaur Jaswal’s novel exploring “honour” killings in the UK; and Vardø, the adult debut of children’s author Kiran Millwood Hargrave, a historical novel about the 1621 Norwegian witch trials.

All were subject to intense bidding wars: particularly Millwood Hargrave’s Vardø, which, after a 13-publisher fight, went to Picador for a “significant six-figure sum” and is due in early 2020. Afterwards, Millwood Hargrave likens the process to speed-dating: “For me, I looked at publishers who are publishing a lot of women and picked out the ones who do it well. We’re at a time when women’s stories are getting noticed and selling really well. I hate to look at things in trends, but there is currently a push for female-lead narrative. Just look at Naomi Alderman’s The Power – it won the Bailey’s and it has just exploded.”