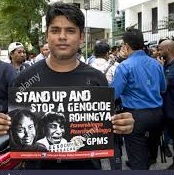 Ziaur Rahman was born on 20 June 1993 at Mee Chang Zay, ButhiDaung Township in Arakan State, western Myanmar. In 1993, his family fled Myanmar to escape religious persecution and human rights abuses, which include forced labor, and restrictions on movement, marriage, and education, as well as land confiscation, arbitrary arrest, and extortion. Because his family and all Rohingyas were denied the right to citizenship in Myanmar, they were subjected to human rights abuses with no recourse.

His family sought refuge in Bangladesh, and Ziaur was raised as a refugee in Nayapara and Kutupalong Registered Refugee Camps. Ziaur excelled at school in the refugee camp, where he earned first prize for the annual examination and academic competition at primary school. He studied at the refugee camp and at a local school of Bangladesh.

Officers from the UN and Bangladesh government attempted to give rations to the Rohingya refugees, but his family denied the rations and demanded an end to forced repatriation. Following the hunger strike, the government agreed to the terms set by the Rohingyas, and the community again accepted food rations. Yet when his grandmother’s family received rations, the government reneged on their agreement and sent his second maternal uncle to jail. When his mother went to visit his uncle, she was robbed and assaulted by local Bangladeshi people. His grandmother’s family was targeted by the Bangladeshi government specifically because the family included advocates for the rights of Rohingya refugees in Bangladesh. His mother together with Ziaur depended on his grandmother’s family.

Although the forced repatriation ended, Ziaur and other Rohingyas were denied basic rights in the refugee camps, and their quality of life was very low. The camp lacked infrastructure for hygiene and education. The government of Bangladesh did not allow Rohingyas to attend government schools, so Ziaur pursued education on his own. Life in the camp was unbearable, and conditions deteriorated for all Rohingya refugees in Bangladesh by 2003. Ziaur was studying, but had no monetary support or way of earning money, as it was illegal for refugees to work. Often, he borrowed exercise books and pens from others classmates. He was very poor as refugee, but was a brilliant and hardworking student. He finished primary school in the refugee camp and also attended junior high school in the local school of Bangladesh. He studied under the solar lights due to the lack of lamps and kerosene at his home. Many times he went to school hungry because his family did not have enough food. Although he was accepted to study at the Open University in Bangladesh, he could not attend because of financial constraints and because the Bangladesh government policy barred refugees from attending university.

Ziaur’s activism also made him a target of the Bangladesh government. When he condemned camp conditions in conversations with foreign delegations and media, the UNHCR and camp staff took action against his family. In 2011, his family ration book was confiscated by the Camp-In-Charge of Nayapara Refugee Camp. Ziaur was then transferred many times to different locations. Bangladeshi police constantly searched his home and arrested him. For three months, he was ordered to be present at the CIC office every morning from 9am to 10am. He was constantly threatened and discriminated against by Bengali locals. Due to the threat of imprisonment and persecution, Ziaur left the camp. When the Bangladesh and UNHCR checked the history of his family members, they were also targeted because of his activism. He was rising in an overcrowded and polluted refugee camp in Bangladesh.

In 2010, Ziaur became involved in efforts to help teach women who were illiterate. He was a Scout Leader in the “16 days of Activism against Violence” campaign, where he repaired roads and housing structures of the camp’s most vulnerable families. He also participated in awareness-raising for the prevention of disease, as well as counselling sessions to address issues of violence against women, child marriage, polygamy and smuggling.

Ziaur’s passion is community development. His talent was recognized while he was serving his community in the Bangladesh refugee camp, as he became a prominent community leader for Rohingya refugees. In November 2011, he won an award for his leadership and service at the Annual Scout Campaign at Nayapara Rohingya Refugee Camp.

Ziaur participated in many social activities during the 16 Days Activism campaign on behalf of all Scouts of Nayapara Refugee Camp. His mother also received an award as a “Standard Family” of the E-Block in Nayapara Refugee Camp. This award recognizes a woman who has taken initiative to support herself and her family, and to develop skills for her own betterment. His mother accomplished this while also being a single mother. The family female of household who earned a living through poultry farm! She used to work with poultry before he was displaced.

In 2011, Ziaur was selected for resettlement. Yet the resettlement process was stopped by Bangladesh government. Ziaur then joined of Annual Scout Campaign of TAI (Technical Assistant Incorporation, NGO supported by UNHCR). Ziaur has five years of experience working in high pressure environments and developing creative approaches to problems.

On 28 august 2014, Ziaur was trafficked by human traffickers from UNHCR Kutupalong Camp in Cox's Bazar of Bangladesh and was forced to get on a boat. There were more than 310 people on the boat from Myanmar and Bangladesh including women and children. He was beaten by traffickers and moved to Thailand. The traffickers hid him in a mangrove forest, where he had no food for five days. He was taken to another forest, where he was among 134 boat people rescued by Thai authorities and brought to the police station of Ranong. Ziaur then helped Thai authorities and worked as an interpreter for international organizations. He was officially declared a victim of human trafficking by the government of Takupa district, Phang Nga, Thailand. Later, he was sent to a shelter run by the Sonkhala (UNHCR) in Thailand. However, the shelter staff was corrupt, and he was again sold by police to human traffickers. He escaped the shelter and human trafficking camp after being sold seven times.

Ziaur is currently living in Malaysia. He is a holder of the refugee status, currently registered with UNHCR Malaysia with the experience of being a refugee in three countries: Bangladesh, Thailand and Malaysia. H feels unprotected and vulnerable. At the same time, he would like to state that his activities whatever were always non-partisan. He understands both the pain and graveness of the people. This is the real cause that moves him towards action. Besides, he doesn’t have any supporters, and his mother is still residing in a Bangladesh refugee camp.

In March 2017, he was approached by two young filmmakers, who subsequently made a short documentary about his life as an illustration of the Rohingya plight. It was called “Selfie with the Prime-Minister”. It received an award in Freedom Film Festival 2017, and was screened in different countries around the world. The documentary speaks of the challenging life of a refugee in Malaysia, his activism, and of his dream to take a selfie with the Malaysian Prime Minister, because he was the first in ASEAN to speak for the Rohingyas. In this movie, he never mentioned anything implying his partisan affiliations, and instead only spoke about his grievances as an individual and a refugee. His positive attitude to Malaysia is also visible throughout this film.

He faces a lot of challenges. He does not have a job and therefore hardly can afford to feed his family, pay the house rent or afford simple transport expenses. Recently he had to undergo an eye surgery which incurred a lot of expenses He still cannot see properly with his right eye and he has may inflammations according to the doctor.

At the moment, Ziaur is writing a book about his life and that of his people.

You can view the trailer of the documentary ‘Selfie with the Prime Minister’ here.