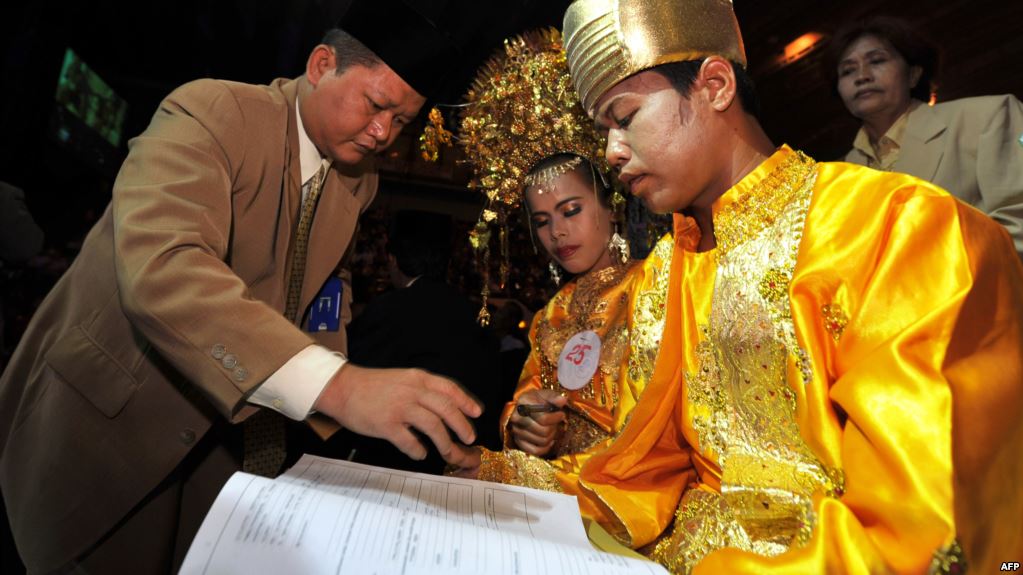 In Indonesia, interfaith marriage is legal but culturally discouraged and some religious figures have made it their mission to help couples of different religious backgrounds get married despite societal obstacles.

Indonesia’s 1974 Marriage Law says a marriage is valid “if conducted according to laws of religion and belief of both sides.” The words “both sides” have become a thorn in the side of thousands of interfaith couples contending with the requirements of clergy, relatives, and bureaucrats who stand in the way of their unions.

It is common for one partner in these couples to simply convert to make everything easier. But what if neither wants to switch faiths?

Some have solved this problem by getting married in Singapore or Australia, where different religious backgrounds are a non-issue.

But for those who wish to make their union legal at home, there is help.

Among those coming to the rescue such couples is Mohammad Monib, director of the Indonesian Conference on Religion and Peace, a religious freedom advocacy group in Jakarta, who says he has helped more than 300 interfaith couples marry in the last decade. He does this by making them aware of their rights and guiding them through the rules and paperwork.

“Marriage between people of different faiths is a classic problem in Islam, ever since the 7th century,” said Monib. He wears glasses and a knit peci cap, commonly among Indonesian Muslim men, emblazoned with the words “GUS DUR,” referring to Indonesia’s late President Abdurrahman Wahid, a man regarded by many as a champion of tolerance and moderate Islam. “What I try to explain first to couples that come to me for help is the Muslim perspective on interfaith marriage,” he said. “There is nothing in the Quran that prohibits this.”

The Islamic holy book, he said, allows marriage between Muslims and “people of the Book,” or those of other Abrahamic faiths like Judaism and Christianity. Monib interprets this in the Indonesian context to mean “all religions protected by Pancasila,” Indonesia’s political philosophy, which sanctions six acceptable religions: Islam, Protestantism, Catholicism, Buddhism, Hinduism, and Confucianism.

For many Indonesians, “interfaith marriage is seen as something impossible,” he said. Groups like the Indonesian Ulama Council of clerics have declared haram, or forbidden, and radical groups like the Islamic Defenders’ Front have used vigilante tactics to scare off interfaith couples, said Monib.

Indonesia’s Constitution and Human Rights Commission both protect people’s right to marry whoever they choose, but mixed-faith couples often come across civil servants who block them from registering their marriage.

Monib, a Muslim, is married to a Muslim woman and thus never personally experienced these problems, but he feels compelled to defend those who do. “If you speak about human rights, marriage is the basic one,” said Monib, who contends that resolving the issue of marriage ultimately addresses other moral concerns. “Sex is also a basic human need,” he adds. “Extramarital sex is banned in all religions, so if we help people get married first, it is actually very positive.”

He works to spread that message and raise awareness on Facebook, where he has more than 25,000 followers. Young people, he said, seem much more open to the idea now than in 2004 when he first started working on the issue.

Monib has helped lovers end decades of heartbreak. In 2007, he helped a Muslim-Protestant couple who had been dating for 20 years, since middle school, finally get married.

Another couple he helped was Renaldi and Cindhe Bosito, a pair of divorcés who met in high school and started dating again after their first marriages ended around the same time.