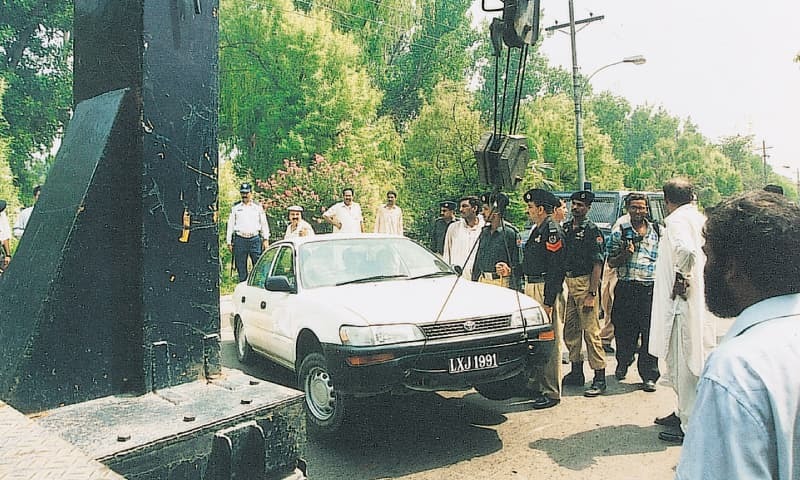 It was a racy build-up to the entry of the ‘lady of the house’. There was a hasty flight into exile. But before that there was a car chase.

A little more than 18 years ago, Begum Kulsoom Nawaz slipped through a police cordon that had been placed around her Model Town home the previous night to bar her from leading a protest rally against Gen Pervez Musharraf. Her ‘escape’ led to a car chase that ended when the police finally intercepted the car on Canal Road.

But the former first lady, who had replaced her incarcerated husband as president of the PML-N days after the military coup, refused to leave the car. She locked it and made it known that she was going nowhere. Eventually, it was an overhead crane summoned to salvage the situation that bodily lifted the car and took it to a police compound nearby. The standoff lasted around 10 hours.

This moment when she sat suspended in midair was the high point in Begum Kulsoom Nawaz’s short but eventful political career that started soon after Gen Musharraf, with the help of other generals close to him, ousted Nawaz Sharif. The former prime minister was finally sentenced to life imprisonment on charges of ‘terrorism’ and ‘hijacking’ a PIA plane bringing Gen Musharraf back from a tour of Sri Lanka.

Begum Kulsoom, who passed away in London on Tuesday, was a housewife with a postgraduate degree in Urdu literature from the University of Punjab — the daughter of a medical doctor and granddaughter of legendary wrestler, Rustam-i-Zaman Gama Pehalwan. She barely spoke in the public even as the country’s first lady and avoided politics until she was thrust into the limelight to protect her family. That eventful day in 2000, she created an image of resistance, bringing the PML-N out of the shadow of the establishment.

“There are two chapters of resistance in the history of the PML-N. The second one is this period since Nawaz Sharif was disqualified by the Supreme Court in July 2017. But the original one was written under the stewardship of Begum Kulsoom. Until she started challenging the military dictator, this aspect of the party was hidden from public view,” argues a political commentator who wishes to remain anonymous.