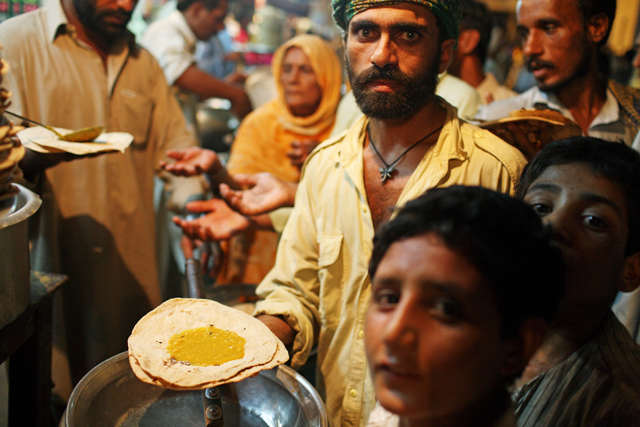 Hunger is one of the biggest universal problems in the world. In a world with varying financial statuses, you are bound to have some people who have too much to eat and others who go hungry every day. It is especially true for developing nations, from Africa to South Asia, although the problem rears its ugly head in the most developed nations of the west, including USA and UK.

Redistribution of food stuffs seems like an obvious solutions and this, combined with the post­industrial nature of the western society led to the creation of what are called “Food Banks”, “Soup Kitchens” and other such organizations. These organizations either collect donated food or use donations to feed the homeless and the poor so they may not go hungry.

That solutions may seem feasible in the western societies where you can facilitate such endeavours, but it is certainly not feasible in countries like Pakistan. A country already stricken with poverty, where more than 60% of the population lives on less than $2/day, even the ones who want to be philanthropists can’t easily make organizations of the scale or the structure of food banks. Luckily, the area has had a solution for that that has been around for centuries, even before the idea of the first food bank was conceived.

As a place where heavy emphasis is placed on both spirituality and religion, you come across shrines of the old sufi saints on every other corner. These shrines are a magnet for the devout, where people travel far and wide to pay their respects and vow to donate money, and more importantly, food, if their wishes are fulfilled. This practice has been going on for centuries. These shrines have thus become not only a place for the devout to receive spiritual guidance, but also centres for the travellers and the day labourers to get free food, freeing them from the worries of at least one of the basic necessities of life.

One of the biggest examples of this is the Data Darbar shrine in Lahore. The shrine houses the grave of the saint Ali Hajveri, known as Data Sahab which roughly translates to The Giver. Data Sahab is a central place in Lahore, where you can find someone distributing food at any time of the day, throughout the entire day. Data Darbar feeds thousands of people every day purely from the food that the devout distribute.

There is another practice that goes in tandem with this: The practice of Langar Khana. A Langar is basically what a soup kitchen might look like, evolving over centuries. The shrines have big donation boxes everywhere, where people are urged  to put money in. These boxes are continually emptied and the proceeds are used to fund huge kitchens or “Langars” next to the shrines. These “Langars”, feed thousands of people three times a day. One of the largest Langar Khana is in Pakpattan, at the shrine of Khwaja Ghulam Farid, where nearly 40 thousand people are fed during his annual “Urs”, the anniversary of his death where the devout come from all over the world to pay their respects.

While hunger may remain a large issue in the big picture, the efforts like this put a significant dent in the problem and help in making sure that the problem does not spiral out of control. The fact that this is heavily related to the spiritual heritage of Pakistan is just the icing on the top.

The author is a Doctor by profession and IT guy by passion.