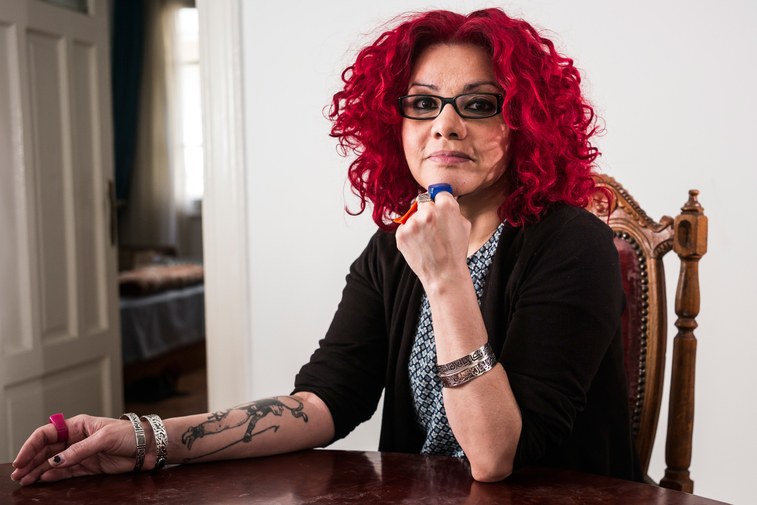 When talking to Egyptian-American activist Mona Eltahawy, expect her to swear. A lot. Despite living in a political era of heightened vulgarity, we’re still “raised as girls to be nice and to be polite,” Mona tells Teen Vogue. But “nice and polite have got us nothing.” That is why when she speaks in public, she makes a point of cursing. “In my experience,” she recently wrote in an op-ed, “almost nothing can match the power of profanity delivered by a woman at a podium.” For Mona, a Muslim woman of color, these acts of radical rudeness are protests against those who don’t recognize her basic humanity and want to censor her language. “In the face of [today’s political climate], I am astounded that people want me to be careful over my words…This is where I’m determined [to curse].”

But using language to subvert societal expectations is just one way Mona is working to empower women to find their voices. Especially women marginalized because of their religion, race, or class. She reminds us that even within the recent resurgence of #MeToo, we find the influence of power and privilege. The fact that mostly straight, white women actors are the face of the #MeToo movement — founded by black feminist activist Tarana Burke in 2006 — demonstrates that the farther you are from what is culturally valorized — secular, white, straight, wealthy — the less likely you are to be heard.

That’s why Mona started #MosqueMeToo. She was inspired when Sabica Khan, a young Pakistani woman, posted on Facebook about her experience of sexual assault during Hajj. Sabica’s post quickly went viral, and Mona realized Muslim women would feel safer by sharing their stories in solidarity. She tweeted about her own experience of being groped during Islamic pilgrimage at age 15, a story she had told before, including on prime-time Egyptian television in 2013. But this time, she invited other women to break their silence about sexual abuse in sacred spaces by using the hashtag #MosqueMeToo

“I have shared my experience of being sexually assaulted during [Hajj] in 1982 when I was 15 in the hope that it will help fellow Muslim women break silence and taboo around their experience of sexual harassment/abuse during [Hajj]/Umra or in sacred spaces. Let’s use #MosqueMeToo,” she tweeted.

By showing Muslim women they are not alone, the hashtag has encouraged them to tell their stories and take a collective step toward dismantling the hierarchy of public visibility. It is a way, as Mona says, for Muslim women to “demand attention.” After just 24 hours, the hashtag was used more than 2,000 times, and has gone on to become one of the top 10 trends of Farsi Twitter, according to the BBC.

Sexual abuse during Hajj certainly isn’t new, but this outpouring of public testimony is. Studieshave found that many individuals don’t report harassment because of shame, concern of retaliation, and fear that they won’t be taken seriously. Mona points out that Muslim women feel additional pressure to remain silent out of concern their words will be weaponized by the Islamophobic right wing in order to demonize all Muslim men. It’s something Mona likens to the Miranda warning:

“Part of the risk for Muslim women of #MeToo is that…everything a Muslim woman says can and will be used against her and the entire community.”

Mona doesn’t accept this as a valid reason to admonish Muslim women. Hiding abuse is “what makes Muslim communities look bad,” she argues, “not that we rise up.”

Despite these risks, Mona has found social media to be a powerful space for her radical activism, and as a freelance writer, her nearly 300,000 Twitter followers from across the world serve as a form of institutional support. While she acknowledges the potential for toxicity when using this platform, Mona believes they can also facilitate a more inclusive debate. This is how women can confront the topics they’ve been raised to avoid. This, she says, is how we “destroy the forbidden,” shining a public, unfiltered light on topics like sex, abuse, and racism and challenging misogyny and heteronormativity.

Mona could offer a master class on the art of the subversive tweet. She is provocative, transparent, and regularly signal-boosts. But perhaps her most valuable skill is how to respond to trolls and personal attacks — something she hopes her young audience can learn by following her online interactions.

After launching #MosqueMeToo, Mona was accused of seeking attention and trying to destroy Islam and received vicious insults like “you’re too ugly to be assaulted” and “you’re a whore.” But she uses humor to highlight the misogyny behind such attacks, bringing the conversation back to what really matters. “OK, I’m ugly,” she says, “So what? That still doesn’t take away from the fact that I was sexually assaulted.”