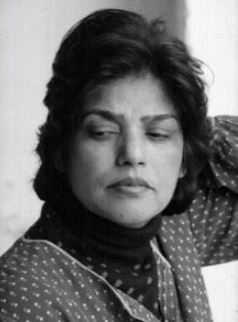 “In my country woman has no identity, she is identified by her relationships with others – she is a sister, wife, mother, daughter – but is she anything on her own?” - Kishwar Naheed

Kishwar Naheed is a feminist poetess from Pakistan. She was born in Bulandshahr Uttar Pardesh, India in 1940. In 1947, her family moved to Lahore during the time of partition. She is one of the best feminist poets of Pakistan. The body of work she produced over the span of forty years reflects the struggles of women against the patriarchy before and after partition. Her style is innovative and can be regarded as portraying a journey that every woman who has or is living in this part of the world can deeply relate to. She was the founding member of Women Action Forum and also started an NGO ‘Hawwa’ which promotes gender equality and women’s empowerment in Pakistan.

‘A Bad Woman’s Story’ is an English translation of her memoir in Urdu named “Buri Aurat ki Katha”. The Urdu edition was published in 2003 and the English translation by Durdana Soomro was published in 2009. In her note to reader, Naheed shares her motivation for writing this book, which is to narrate every manner in which the society in the subcontinent has changed itself since 1940 and the impact of these changes.

The memoir consists of thirteen chapters and it does not follow a chronological order. The author reasonably acknowledged that that the narrative is not tied to any calendar. The African-American writer Maya Angelou and other writers have declared that self- narrative in the form of monologue is the style of the new novel and the plot is not necessary. The subtext itself can make a novel. The first thing that catches the readers’ attention is each chapter which is named by a different historical woman figure each time.

For example, the episode in which Naheed talks about the trade of professional prostitution and forced prostitution in addition to how it assuage the slavering lust of man is named after “Mahlaqa’s tale who was a courtesan who gave away all her possession to homeless women. The chapter that portrays the birth of her career as a poetess is named “At Meera Bai’s Feet”. Meera Bai was a Hindu mystic poet and devotee of Krishna. The section that recount her love affairs is “Discreet Laila”. It is a poignant and poetic account of a woman who fought for her independence in patriarchal society. Naheed employs allegory and abrogation of language in her memoir. She uses the words of Urdu, for example hakeem, mujra, iddat, phulka etc.

The book begins from the time before partition when following Sir Syed Ahmad Khan’s maxim which said that: “Girls should only be taught the Quran by sight –and Behishti Zevar.” Girls were not educated and were forced to wear the purdah (face covering). Naheed then gives an account of her journey starting from a child who wrote to pen pals to being one of the best poets and what it took to reach there.

What made her a “bad woman” was actually her voicing against the hypocrisy of family in which meat was doled out to the men, a society that allows an elephant to roam from house to house but a woman is made to adorn bed against will and called chaste; a religion which propagates that a woman is inferior - otherwise she would have been God or a prophet; a biased language and finally the institutions that passes the “Zina ordinance” (laws in Pakistan that were enacted in 1977 as part of then military ruler Zia-ul-Haq's "Sharisation or "Islamisation" process). She also voices out against the banning of a book - translated by a woman - which was accused of promoting immoral issues regarding to the female body, but not the books by male writers talking about male body parts.

The refreshing aspect of the book is that Naheed tackles the issues which she did not talk about previously. Naheed talks about homosexuality, alcohol, premarital affairs, abortion, post-marital affairs and even sex out of marriage. In the chapter “Discreet Laila”, she talks with a tone of self-assurance about ten men that came into her life. She highlights women’s demand to the right for education; the right to leave the house to earn a living; the right to a career, the right to interact with the opposite gender and their refusal to the invitations of sex from colleagues and bosses. She also voices out against the inhuman martial-law, Shariah that allows beating wife-beating, Iddat (the period a woman must observe after the death of her spouse or after a divorce, during which she may not marry another man) only on a wife but does not advise to take divorce from an alcoholic husband who attends Mujras and has sex with every girl in town.

Naheed also writes about the exploitation against the fairer sex before and after partition and she backs up her arguments with concrete current and historical references like of Saffia Bibi, the Zina Ordinance, unmarried pregnant girls of Bengal, women of Kashmir and Palestine and the history of courtesans.

However, in my opinion, the weakness of the book is that it is repetitive: For example, in regards to her abortions and her problems with her in-laws. One of the most significant aspects of this book is that it does not represent Pakistani women as passive or victims like many Pakistani writers do to pander to the Western audience. The book portrays women of Pakistan as equally strong, self-aware and independent as Western women are. ‘A Bad Woman’s Story’ is the tale of a woman who tries to escape the suffocating relations and finds solitude in her poetry.

“Poetry gave me much pain. Had I abandoned it perhaps I would have been accepted as a good wife. I would have the distinction of being a devoted mother; I would have come even closer to my brother and sisters. But I would have understood the world less, been less truthful, would have made fewer enemies, and would have found less pleasure in solitude. - Kishwar Naheed