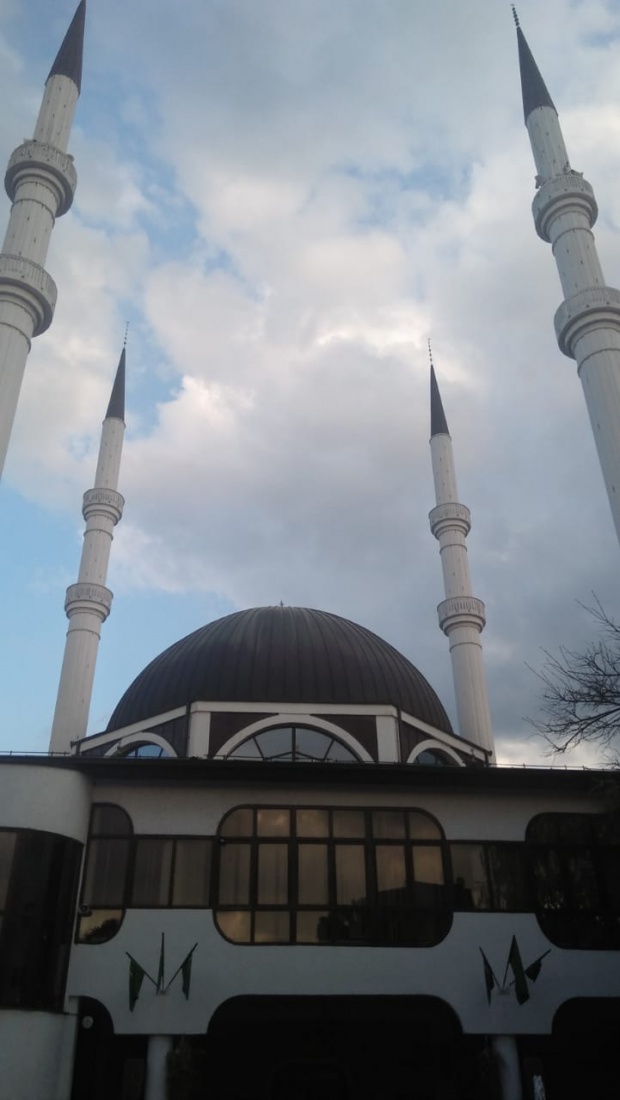 Written by: Nia S. Amira, an Indonesian author, journalist, and linguist. She writes on culture, international affairs, multiculturalism and religious studies. Her articles have appeared in over thirty media, published in Europe, Asia, and the US.

Sanski Most is a town and municipality located on the Sana River in Bosanska Krajina, between Prijedor and Kljuc. Administratively, it is part of Una-Sana Canton of the Federation of Bosnia and Herzegovina, an entity of Bosnia and Herzegovina. In 1878, the little town of Sanski Most was described as Muslim by Croatian historian Vjekoslav Klaić and the town was part of the Vrbas Banovina of the Kingdom of Yugoslavia from 1929 to 1941.

During the Bosnian War, the town was controlled by the Army of Republika Srpska (Bosnian Serbs) and remained under its control until October 1995 when the Army of Bosnia and Herzegovina took over it shortly before the end of the war.

In 2004, Serb-inhabited Oštra Luka was split from Sanski Most and ceded to the Republika Srpska entity.

Sanski Most, with a pre-war population of about 60,000 in the town and outlying villages, is already well-known to human rights investigators and aid workers. It was in Sanski Most that the Serbs first made their policy of “ethnic cleansing”, first by taking or rounding up for detention the Muslims and Croats known as political leaders and intellectuals, then forced the men for military service simply because they were at their right age. Along the way, thousands of Muslim and Croatian women were treated very inhumanely.

Sanski Most is a tiny calm city with the total area of 781 km2 and 50,421 inhabitants according to the last Census in 2014. It is a home to many different types of stores, cafes, and restaurants. During the summertime, every corner of the city is full of Bosnian Diaspora coming from the neighboring countries such as Austria, Germany, Switzerland, and Sweden. Bosniaks dominate the city and about 95% are Muslim.

What's interesting about Sanski Most with the Sana River that flows the entire of the city? As a Muslim, I will immediately look for the largest mosque in the city. Hamzi Begova is a grand mosque that was built during the Ottoman period in 1557. The mosque with 4 minarets really looks beautiful at any time; in the morning, afternoon and evening. It is as if the light always shines on it from the heaven, as well as gives the shades on it.

The construction of this mosque marked the beginning of the urbanization of the town and its surrounding villages. Sanski Most was called ‘Vakuf na Sani’ during the Ottoman-era. However, during the war of aggression in Bosnia and Herzegovina in 1992 and 1995, Hamzi Begova was razed to the ground by the ethnic Serbs as it served as the focal point of both Bosniak and Islamic life in the town and its surrounding villages. With the financial assistance of the diaspora, the mosque was re-opened on Sunday, August 6, 2000.

The shady, gated courtyard in front of the mosque is where the fountain is located at. The complex also includes an outdoor praying area near the main entrance of the mosque, a library that also includes a computer lab, a traditional restaurant that offers local cuisine, an Islamic bookshop that sells books related to the country and Islam, various flags, prayer beads, prayer mats, black seed oil and many other items, and an Islamic boutique that sells scarves, fragrances from the Middle East and various dresses for females. Hamza Begova also hosts various events throughout the year such as Quran recitation evenings, sevdah and ilahija i kasida, nasheed, concerts, book promotions, and academic conferences.

Who is the important person behind this big activity in the holy place that becomes one of the biggest mosques in Bosanska Krajina?

Husein ef. Kovačević was born in 1965 in Bužim, a town and municipality located in Una-Sana Canton of the Federation of Bosnia and Herzegovina, an entity of Bosnia and Herzegovina. It is situated in the most northwestern of BiH. He finished elementary and middle school in his native place, Gazi Husrev-beg's medres in Sarajevo. Then he continued his study at the Islamic Pedagogical Faculty in Bihac. Before going to the former JNA for a year, he worked in Jamat Zagrad in Velika Kladusa, where, for the last three years, there was no permanent imam. There, in a short time, he gained a good work experience. He left about 150 Mekteb children behind him.

At his early age, Husein became a young Imam just shortly after he left the school, but his happy marriage with Razia, and their three children; Elmedina, Muhamed, and the youngest Muharem, gives him the big courage to face all the complexities in life. He got married at his nineteenth.

One day, Husein came to Kamengrad near Sanski Most, it was one big jamat, time to build a mosque. Problem is always there and human kind were created by Allah to fix it. Husein  emphasized his work on mektebu teaching and for the reconstruction and construction of mosques. Over 250 Mekteb children attended classes at two points. Two mosques were built, and it was a jamat with tradition. Real new experiences for Kovacevic who has travelled in Iran, Turkey, Saudi Arabia, Syria, Egypt, Bulgaria, and Switzerland, representing his work as an Imam. Today in Kamengrad, there are two jamatas and everything works properly.

Before the war, the village of Bužim was officially part of the Bosanska Krupa municipality. In 1996, Bužim became a municipality itself. The town was defended by the Army of the Republic of Bosnia and Herzegovina during the War (1992-1995). One of the most elite and well-known brigades of the Army of the Republic of Bosnia and Herzegovina was 505th Brigade comes from Bužim and this was a special story for Husein. With one group of men from Bosanska Krupa Husein headed towards Ključ, Petrovac, and from there to Bihac. It was a convoy and on that road, in the village of Peja, the group took me out of the convoy. By the will of Allah, everything was well over. From Bihac Husein went to Buzim, and he joined the Territorial Defense, later into the 505 Brigade. By his experiences in the worst human war in the modern history, Husein realized that he was no longer with the complete group; 500 were dead and among them was his brother, Hasan.

About 500 years ago, the Ottoman had arrived in Balkan, Mehmed II is commonly known as Muhammad al-Fatih the Conqueror (Sultan Mehmet Fatih), was an Ottoman Sultan who ruled first for a short time from August 1444 to September 1446, then later from February 1451 to May 1481. At the age of 21, he conquered Constantinople (now Istanbul) and brought an end to the Byzantine Empire. Mehmed continued his conquests in Anatolia with its reunification and in Southeast Europe as far west as Bosnia. After some battles during the 15th century, Bosnia fell in 1463 and became a tributary kingdom of the westernmost province to the Ottoman and Mehmed is considered a hero in his homeland and parts of the wider Muslim world.

The 18th of May, 2018, becomes the celebration of the 103rd anniversary of the crucial battle for the survival of the Turkish people in Sanski Most. Battle of Canakkale was celebrated at the site of the monument to Turkish Shekhids in Donji Kamengrad near Sanski Most, one of the most important places in the history of Turkey. Sultan Mehmed Fatih as the ruler of Ottoman in that period considered as the respectful man who had come to hike to Bosnia to spread Islam by the means of all the lands he had conquered and Sanski Most, was traditionally as the city that had close relations with the Turkish. The Battle of Canakkale, is the Day of the Shekhids and a large number of thousands of Bosniaks in Sanski Most who had participated in this battle had laid their lives.

The history of 500 years in the past is still alive in the memory of every citizen in Sanski Most, for mutual relations with the Turkish in particular and with the Muslim community in the world for the future historical tourism projects of the remaining monument of Sultan Mehmed Fatih. Three oldest mosques built by the Ottoman of the 1,149 mosques throughout Bosnia were built in Sanski, namely; Dzamija Sultana Mehmed built in 1463, Hamza-begova dzamija built in 1557 that was destroyed during the war in 1992 and reopened in 2000 after the restoration, and the third one is Trnova Mosque that was built in 1895 by Austro-Hungarian that was destroyed in 1991 and reopened in 2009.

The rest of the beauty sites of the tiny city that has amazing nature panoramic from water to water; from rivers to the nearby island which is captured the city in its bright colorful Spring and the smiling people in the village you will encounter, will ask you to have a cup of local coffee or tea in their home, then followed by an offer of cigarettes.

Bosnian hospitality is a true feeling coming from heart, they will go out of their way to just help you finding something, Imam Husein Kovacevic has been doing lots of work to rely with some reliable connection from all over the world for the development of Islam in Bosnia and Herzegovina, especially in the region of Sanski Most.

The man who loves reading, playing ping pong, and basketball has been dedicating most of his life for the Life goes on, and the people of Sanski Most and Bosnia will always await his coming as their guests, to enjoy a beautiful spring, down the flowing clean river and stay in the warmth of the country houses, sharing stories about Bosnian old history, whilst learning to make that delicious Cevapivivi and listen to the traditional music and practise the dance. Bosnia-Herzegovina is full of the spring’s beauty, Bosnia who has big love for him.

Articles published in the “Your Views & Stories” section of en.tempo.co website are personal opinions written by third parties, and cannot be related or attributed to en.tempo.co’s official stance.