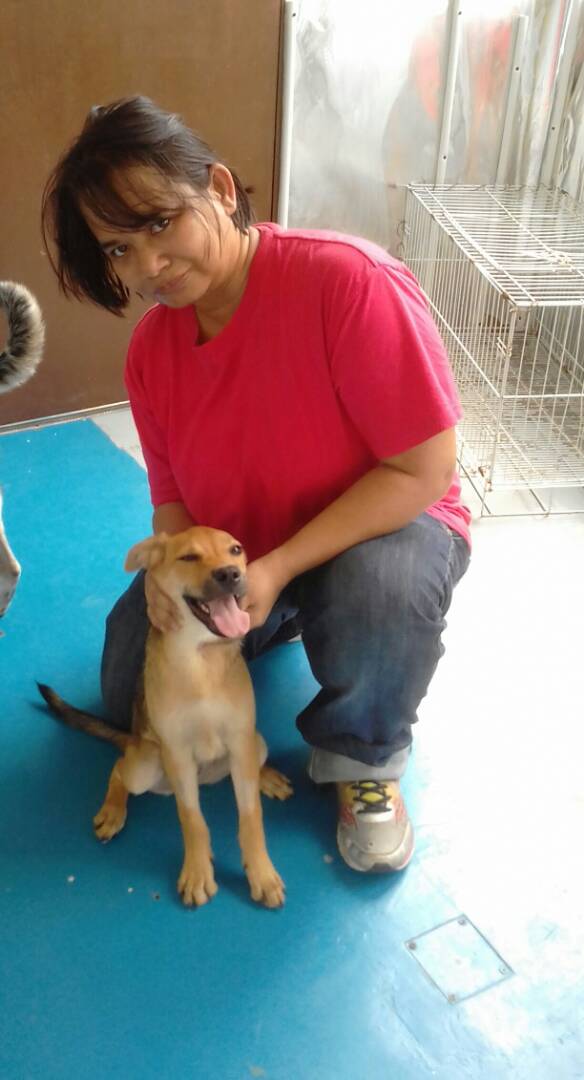 It was a Saturday morning when I found a puppy walking into the office compound. She was small, but healthy. She was friendly too.

Little did I know that Baby, as I named her later, would change my understanding on canine behavior.

My colleagues had told me about Baby, giving her food and noticed that she drank from the drain. No one wanted to take her home for various reasons.

Baby wasn't alone. She had a mother who was protective of her. Princess would bark at strangers but licked my face.

Baby, at two months, was a mongrel. She and her mother Princess looked clean and free from fleas.

Some assumed they had been dumped. I was merely mesmerised by Baby's cuteness.
I called in a fellow rescuer who would foster both dogs. In the meantime, I would raise funds to spay and pay for the medical bills.

We were lucky to get them off the streets - the local authorities were catching dogs, even ones which had owners. Once caught, the dogs were often sent to a pound with deplorable conditions, or to a private animal shelter.

At one point after a month, Baby contracted the dreaded Parvo virus which could lead to fatality. This was something new to me. As an independent animal rescuer whose main focus was on cats, I started to learn new terms and medications needed.

My colleagues rallied in support. I was happy and scoured for potential adopters who would give the dogs a new home. A few expressed interest but none wanted a spayed female dog.

I was confused. Why was it difficult to have them adopted despite the care given?
The answer was simple: Most wanted a pedigree. Baby and Princess did not fit into any of their criteria.

Their journey to find the perfect family lasted for three months. An owner of an animal shelter wanted to adopt the dogs. Months later, I found the shelter was going to shut down. I quickly made arrangements for the dogs to be returned to me in case the authorities would seize them.

The duo was undernourished and had mange. I felt guilty for allowing them for being away from me. They were sent to the vet and are have been formally adopted by a loving individual.

They were later formally adopted by a friend because pets, especially dogs, weren't allowed to be housed in my flat.

At first sight, Baby which had grown to be a year old, showed no signs of pain except for the red sores on her hind legs.

Her mother, Princess, continued to show displays of affection even after not seeing me for a long time.

These are some lessons which I have passed on to my Muslims and non-Muslim friends. Some thought I was eccentric and believed that I was a "liberal" Muslim.

None of these are true. In fact, most Malay Muslims have begun to change their attitude. The movement to accept dogs as companions, however, continues to be a hush-hush topic. At Dogathons, I am told, most owners would who were Muslims, brought their pets along.

The belief that dogs are "dirty" is a lie. There is still a need to advocate for animal welfare. Laws are in place to protect their well-being but are not enforced. Therefore, it is up to society to rise up and demand that animals too have rights.
Until then, their welfare is at stake and we must continue to fight for their welfare.

Elly Van Dalen is a journalist with a Malaysian newspaper.