Artist Hasna Sal, a Muslim, did something radical for someone of her faith: She created a 600-pound nativity scene. A nativity triptych, to be more precise, meaning the work consists of three panels — in this case, one two by nine-foot panel for each Jesus, Mary, and Joseph.

"Many people have said to me: 'Oh, so are you going to convert to Christianity?' I said, 'It’s not about any of that. It’s not about the political aspect of it.' I just want to spread Jesus' message, the little bit that I have understood: Jesus' respect for women and his love for everybody irrespective of who or what you are. That is what has touched me," says Sal, who lives in Overland Park.

Though the traditional season of Christian nativity scenes has just ended, the piece is being celebrated this week at a multi-faith event whose organizers say is the perfect way to start a new year.

Since she created the piece in 2015, Sal has had difficulty figuring out what to do with it for a variety of reasons, but one might be its size.

"My path in life is to spread Jesus' message. I said if I'm going to say this message, I'm going to say it loud and clear, so that's why I made as big a sculpture as my kiln could possibly allow me to do," Sal says.

With help from an acquaintance, she placed it at Grace Cathedral in Topeka for part of 2016. Other than that, until a few weeks ago, it's sat at Glass Concepts 360, a gallery she runs with a partner in Olathe.

Then, just before Christmas, a Kansas City priest agreed to display it.

Father Sunoj Thomas, the pastor at St. Catherine of Siena in Kansas City, Missouri, is from Kerala, the same state in India where Sal grew up, though they'd never met. In mid-December, a mutual friend mentioned Sal's glass nativity. Thomas was intrigued and called her the following day; within a week, Sal had installed the art at St. Catherine. 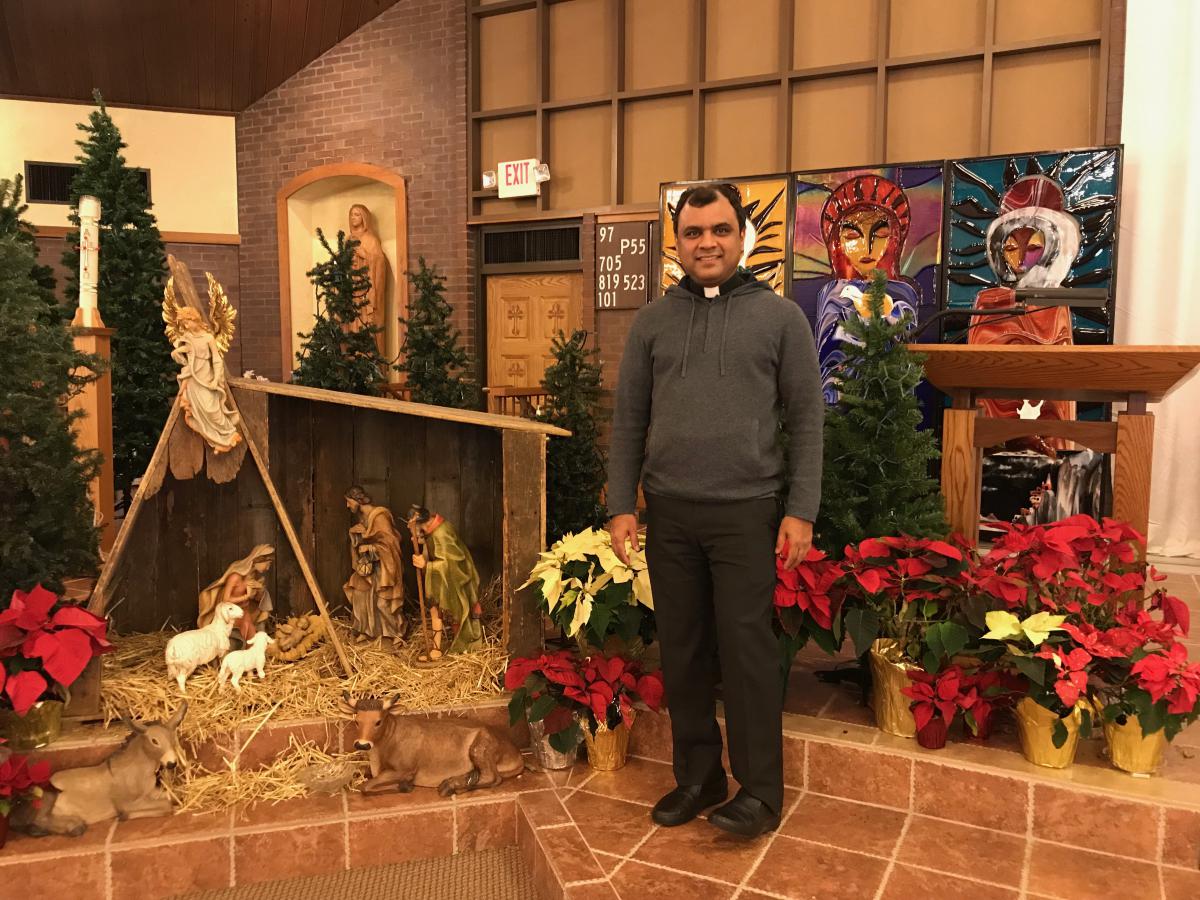 Thomas says Sal's project fits right into the message of inclusivity and the core beliefs he preaches.

"Christ is not just for Catholics," Thomas says. "Christ is for all, he came for all the world."

He grew up Catholic and was raised in Hindu schools. He says he has traveled all over the world and studied religion in Jerusalem and Rome, and has always seen Catholicism as a religion that embraces others.

"We love people and honor people, respect people whether you are man, woman, child. And not just people. Respect nature, respect animals, that's what you do. The moment you have hate, then you cease to be the way you are. If I have hate, then I'm not a Christian," Thomas explains.

"The moment you stop embracing, then you cease to be Catholic; that is what I believe," he adds. 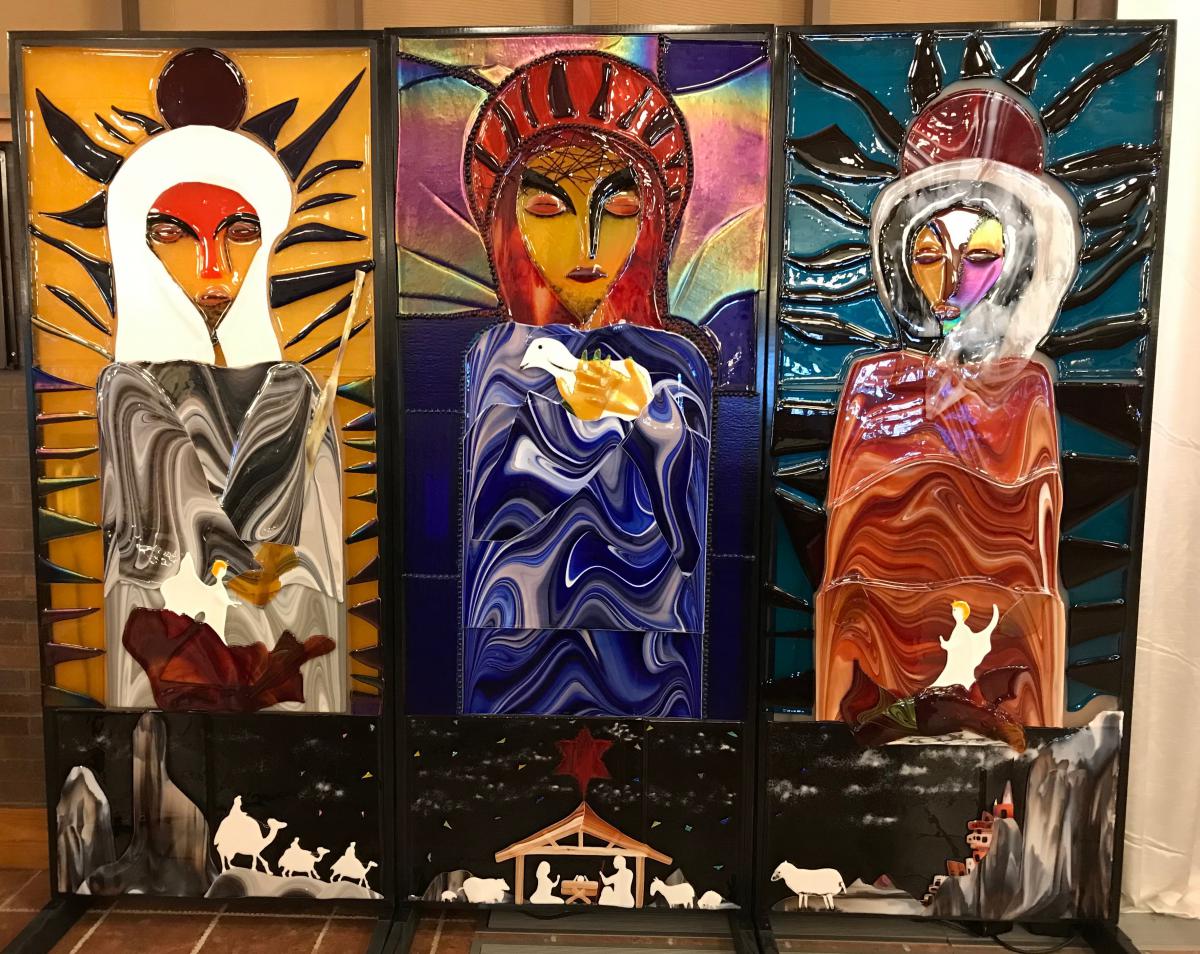 Days before Sal heard from Thomas, she invited some women she plays tennis with to her gallery. One, the singer Catherine Coleman Boone, says she didn’t especially want to go; she was busy that day and much more interested in music than the visual arts.

But wanting to be supportive, Boone, a lifelong Catholic, fit in a visit. She says she was struck by an unfamiliar feeling the moment she walked into the gallery. One of the pieces, not related to the nativity, stopped her in her tracks.

"I couldn’t move. I started crying, and I don't do that with art. Usually I look at art and say, 'Isn’t that lovely?' This, there was something that just grabbed me and spoke to me, and I could hear music," says Boone, who has performed with opera and theater companies across the nation.

Then she saw the nativity. Boone says nothing had ever touched her as the triptych did.

"I went: 'Oh my word,' and it was the nativity. This was right before Christmas, and I’m going 'how did she do this?'" Boone says. "The detail is just incredible, and knowing she did all this with glass and fire ... the color, the intense detail, and again, the same emotional response to this work."

"She understands my work perfectly," Sal says of the immediate connection she felt with Boone. "And when I hear her sing, it gives me goosebumps."