It is often said that nothing remains permanent; that change is the only constant. However, life seems unfair for some people, especially the Rohingya people, who have been recognized as the most persecuted race on earth by the United Nations and appears to be in a permanently unsolvable situation.

Take Hasina Bi Bi for example.  She has never ever had a chance to enjoy a single moment of her life, in either her childhood, adulthood or parenthood. She wants to share her story with us in the hope that her story will make a difference in the lives of those who share the same stories as her.  These circumstances are hers, and those who are forced to flee the country to escape the continued persecution and ongoing genocide against the Rohingya minority living in Rakhine state, Myanmar.

As I started asking about her life, she said: “It is a long, long story that you cannot finish writing for years and it is a very sad one.” This was her inner voice which she has been hiding from everyone since the very early days of her childhood. Hasina BiBi, 35 years old and a single mom with four children, has been living in Makassar, Indonesia, under the protection of the UNHCR. She is hoping to be resettled somewhere in a third country through the UNHCR’s humanitarian program, as she has no other alternative after leaving Malaysia in 2012.

However, she says that all resettlement processes are very slow, which seems almost "non-existent. “Hasina, who was born in Nurllah village in the Maung Daw province, Rakhine state, Myanmar, is a descendant of the Rohingya ethnic minority; whose people have never enjoyed the sweetest fragrance which comes from the green, virgin mountains of Arakan, their place of origin since they had to Flee Myanmar to escape persecution and genocide (a genocide encouraged by the Myanmar government against the Rohingya minority.) Her mother, Hirabanu, is currently living in Malaysia while her father, Abdullah, is deceased.

Hasina Bi Bi’s parents married in Thailand, a country where they could neither become citizens nor be granted refugee status.  As a result of their illegal immigrant status, they had to live secretly, and this meant that their daily survival became quite tough. "There were times that we had to starve and hide in the forest for days to escape imprisonment and deportation," said Hasina with tearful eyes. “On the January 1st 1980, I was born in Thailand, and whilst I was still in my younger and more vulnerable years, my parents crossed the Thai border and fled to Malaysia hoping to build a new life with better living conditions and safety, with the help of the UNHCR,".

When I asked what her childhood dream was, she said with a deep breath, “In Malaysia, like every other child, I strongly wanted to go to school and I used to dream of becoming a doctor whenever I saw doctors curing patients and saving lives. However, deep in my heart, I always knew that I could never become a doctor, for I was born as an undocumented child belonging neither to Myanmar nor to any other place on earth. I would quite often hear government staff and other people refer to us as ‘illegal immigrants’ which is apparently who I am and have been to this day, as opposed to being a citizen of a country, who would be addressed with dignity and respect.”

Despite her vulnerable life and deprivation of basic human rights, Hasina grew up in Malaysia and married a Rohingya man named Ali Johar, at the age of 27. However, her happy married life did not last long. Sadly, having fallen in love with another woman, Johar divorced her and left her with four children. 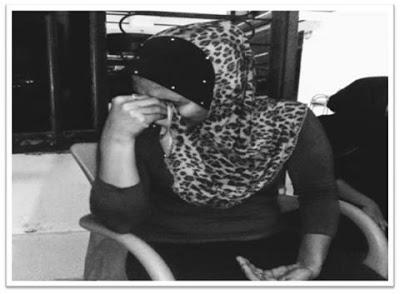 Here is how Hasina describes her life with four children in Malaysia:

"As life went on, my difficulties in trying to raise four children without a husband became almost unbearable; and only God knows what I have been through with these vulnerable children.  Sometimes, I had to work as a labourer, carrying goods from place to place, and cut grass on the roadsides. I would often suffer from severe illness due to exhaustion from those continuous heavy manual work." Having been through a harsh life herself, Hasina began to worry about her children’s future. "As for myself, my life is already finished, so I don't worry about this earthly life anymore. In this world, there is no legal place for us; wherever we go, we are addressed as illegal immigrants and either locked up in prison or kept under watch; we are treated like criminals.

“She added,” but I do worry about my children as I am afraid that their future will be ruined if I do not take action and find a place where they can study and grow up, doing something worthwhile and becoming someone who commands respect and dignity in life.”

In 2012, upon hearing about a country called ‘Australia’, Hasina hoped it would be the place where at least one of her children could build a bright future, enjoying human rights and the generosity and love of Australian citizens.  She decided to take up this dangerous challenge and cramped into a small and dangerous wooden boat with many other.  She sailed through Indonesia’s border; unfortunately, like many others, she could not make it to Australia.

She described “After running three days nonstop, the boat’s machine broke and in the middle of the ocean between Indonesia and Australia water, we were left with no help: even though we asked for rescue from a big ship passing by, they turned their back to us. Then, some hours later, the boat started to sink. While the people were fighting for the lifejackets, my children and I sit at a corner and explained them life after death to convince them that this life is only temporary and that there is a never-ending life which comes after and we are about to go there. Then, I prayed and prayed while lullabying them to send to sleep. Finally, as the sun set, we saw a speedboat approaching rescued us, which brought us to Indonesia, where I was arrested and imprisoned by the Indonesian authorities. After suffering in detention for four months in the province of Kupang, she was released and transferred to Makassar by IOM (International Organization for Migration).

What happened next is another chapter of suffering in limbo while waiting for a country to resettle her through UNHCR humanitarian program. The country where she is now a place where the ability to live as normal human being is severely restricted as the Indonesian government vehemently denies refugees’ fundamental human rights, which means they are not allowed to work or make a living, nor can they move freely within Indonesia. Hence, she cannot send her children to school which is her biggest sorrow in life.

“During the early years, I used to feel relief by hoping that I would have a new home sooner or later, and would have a country to proudly call my home. However, as the years pass by, my frustrations and worries for my children are increasing while my hopes and dreams seem to be dying. You know what, I used to think that life is like a coin with happiness on one side and sorrow on the other side.  When you spin it, you can expect the result to be either Head or Tail.  When it flips, you must patiently acknowledge the outcome, whether it is against your wish or for it; it is what I am doing now and that is how my life is in this country.

I am very thankful to the Indonesian government for providing me with shelter and security, but I don’t feel like it is a home even though I have lived here for more than five years. As human beings, do we live only to survive, or to do something else? Generally speaking, we, human beings, live not only to survive, but also to lead a happy life. And to do so, we need to enjoy some fundamental human rights, which include the right to move freely and the right to make a living for ourselves and our family, and the right to send our children to school. If someone is denied all these basic human rights, they cannot live a normal life, rather his life becomes a total misery as he deals not with life itself, but with anxiety and frustration every day, which leads to great suffering and mental disorder. In fact, after five years of living in Indonesia, I finally, deeply realized that I am indeed a refugee who is living in a world isolated or hidden from the rest of the world.” describes Hasina, referring to her current life.

However, she never gives up and keeps motivating herself and her children to always look for the opportunity to educate themselves as such as learning English form Rohingya Volunteers. Finally, this year her story seems to be a happy ending as she got interviewed from the US embassy for the resettlement in the United States, where she hopes to rebuild her children's lives in peace.

Both happiness and sorrow coexist with each other! In the absence of one, the other simply could not exist! Both happiness and sorrow are two sides of the same coin. Duality is part of nature... the cosmic system! If we have the day... we also have the night! If we have fire... we also have water! If we have God... we also have his counterpart, Satan! This is how the cosmic system maintains itself... or rather, balances itself! Imagine if only happiness existed in the world. In absence of sorrow... how would one judge the importance of happiness? In the absence of sorrow, happiness would lose its meaning! Only when we suffer... do we realize the importance of happiness... never otherwise! It is only by experiencing sorrow and happiness intermittently that life moves ahead in the cosmic system! This was how the theory of evolution was put forward by God Almighty. It simply cannot be that we continue to experience happiness all the time.

If we look at the job of a blacksmith... he first picks an iron rod... immerses it into the burning fire... then beats it to give it shape... then again puts it back into the fire... then beats it to its final shape! Finally, the blacksmith immerses the perfectly shaped object into a bucket of cold water. In the period during which the iron rod was put into the fire and beaten, it was the time for suffering!  The moment when the shaped iron was put in a bucket of cold water, it was the time to experience happiness! This is how life moves on in the cosmic system! If only happiness existed in the world, life would have completely lost its meaning! Why?  Because the whole cosmic system would have become monotonous... gradually decayed and died! To preserve the sanctity of life the Almighty God ordained a journey of both suffering and happiness!