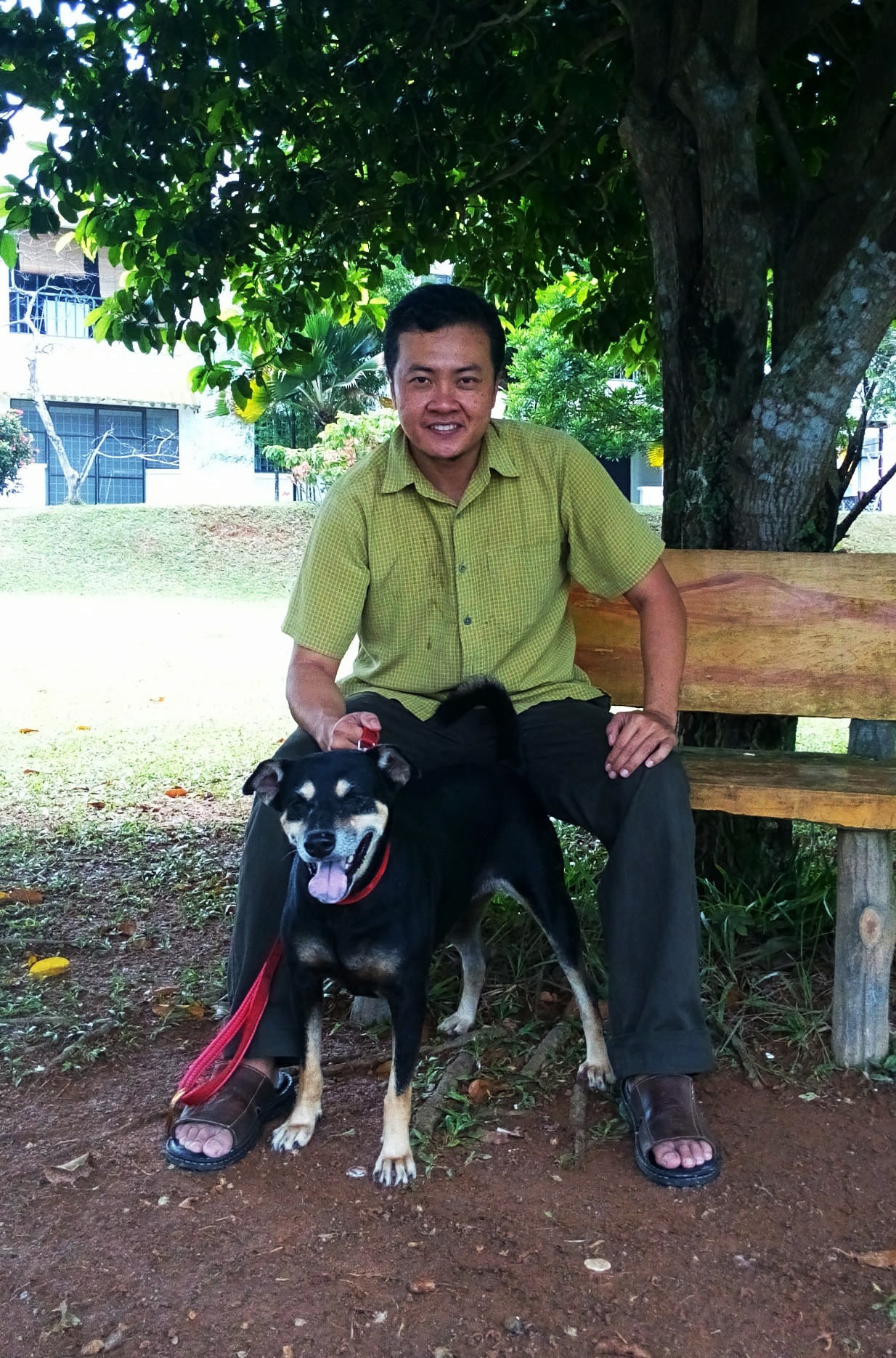 In the name of Allah, most Compassionate and Merciful.
“Shall I seek other than God as a source of law, when He has revealed to you this book fully detailed? (An-Nahl, 6:114)

In the name of Allah, most Compassionate and Merciful.

“O you who have faith! Do not prohibit (make haram) the good things that Allah has made lawful to you, and do not transgress. Indeed Allah does not like the transgressors.” (Al-Maidah, 5:87)

Bafi has been with me for 10 years since I adopted her from Jackie the dog rescuer. I still remember, out of all the 30 dogs, I picked her, or rather she picked me. While others were in cages, she was dragging a mop in her mouth, a plump little mutt, barely three months old. Jackie said: “That’s Molly, if you train her, she can mop your house.”

I was sold. Some months later, my housemate renamed her Buffy, after the vampire slayer. None of my plants survived the onslaught of Bafi the Plant Slayer. All our shoes had bite marks. She was teething. After a year, she no longer bit.

Bafi turned out to be an excellent guard dog.  She is also good at keeping stray cats, rats and snakes at bay. My house is always clear of pests. Bafi is my loyal companion whenever we go camping.  Like me, she loves jungle trekking and swimming in rivers. I learned from Jackie that she rescued Bafi from the pack of wild dogs in Gasing Hill. I guess that explains Bafi’s sheer joy in jungle environments.

Bafi’s vet was a Malay-Muslim woman who wears a tudung (hijab). When she gave Bafi her first vaccination, Dr Siti declared: “Bafi is not a pariah (mutt). Bafi is a Telomian.”

According to Dr Siti, Telomians are Malaysia’s only purebred. They were bred by the Orang Asli (Malaysia’s indigenous people) from Sungai Telom, Pahang. I figured Bafi is a mixed Telomian. Telomians are bred to hunt and chase snakes away from their humble dwellings. No wonder Bafi does her signature hunting style whenever she is in contact with thick foliage, slow deliberate stalking and crouching ... more like cats!

Telomians are also known to hold their food with their paws. Bafi loves carrots and bones and holds them with her front paws. They are also known to be very agile and can climb low trees. Once, I took Bafi to a dog obstacle course. While the other new dogs were confused and scared when their owners tried to guide them through the obstacles, Bafi just went through every single one of them without fear. She walked the entire length of the balance beam, jumped over horizontal poles, crawled through the tunnel and emerged with a puzzled look as if saying: “What’s the big deal?”

Bafi is also a voracious eater. She ate her way through several competitions and won top prizes. The best prize for the fastest eating dog was a three-month supply of Royal Canine. I was mighty proud of her because almost every year she won herself high quality dog food that would have put a big hole in my pocket.

Sufi the cat came to our lives a few years ago. She was the smallest and was left behind in a drain by her mother who had to move her litter of kittens to somewhere safer. Sufi and Bafi became the best of friends. Whoever said dogs and cats are enemies just have to look at them play and rest together. Unfortunately, Sufi was poisoned and died in our garden. Bafi was not her usual self for many days. Like us, she was mourning her little sister.

Seven years ago I embraced Islam. Because I wanted to be a practicing Muslim, I went to research as much as I could on Islam and dogs. I realized that Islam is not against dogs. Many Malay-Muslims do not like dogs because they follow hadiths (Prophet Muhammad’s sayings) that are anti-dogs. I also discovered scholars who have different interpretations on Islam’s view on dogs.

My good friend Abdul Rahman, whose father is a respected ustaz (religious teacher) in Mecca, Saudi Arabia was shocked to see the reaction of Malays toward dogs when he came here. He said in Saudi, they have dogs to hunt and protect homes and property. And although it is not encouraged there to keep dogs as pets, they are not hostile to dogs like most Malays are here.

As a Muslim, I understand that different mazhabs (schools of thoughts) have different interpretations and different ulamas (religious scholars) with different opinions. This is the democratic spirit of Islam. As Muslims, we must be humble to say, Allah knows best. But if there are any differences of opinions or interpretations regarding certain issues, we are commanded to go back to our source: the Qur’an.

There is nothing in the Qur’an that says that a dog is najis (dirty) or haram (prohibited). All Muslims must regard the Qur’an as complete and if indeed Allah has decreed that dogs are prohibited, He would have put it in a very clear way as the case of eating pork flesh, for example. Although there are guidelines in the hadiths (Prophet Muhammad’s sayings)  and sunnah (Prophet (Muhammad’s actions) about handling dogs, just as there are guidelines about marriage, making love, meeting a good friend, eating and sleeping, having guidelines does not make dogs haram or to be treated as something hateful or to be feared.

As Muslims, we must follow the reminders in the Qur’an namely, to not make haram things that God has not made unlawful:

In the Al-Kahf chapter in the Qur’an (The Cave, 18:13-18:22), Allah mentioned that dogs were the companions among a group of true believers who were saved and protected by Allah in a cave. Al-Quran tells us that these righteous people were in the cave with their dog with “its two forelegs outstretched.”

If it was not righteous to have dogs, God would not have told us that story in which the dog has to be remembered as being there with the righteous youths.

On the issue of dog saliva, Al-Quran says we can eat the flesh of the animal that our hunting animal has hunted for us.

In the name of Allah, Most Compassionate and Merciful.

“They ask you, what has been made lawful for them. Say, "Lawful for you are [all] good foods and [game caught by] what you have trained of hunting animals (dogs and falcons) which you train as Allah has taught you. So eat of what they catch for you, and mention the name of Allah upon it, and fear Allah. “Indeed, Allah is swift in account.” (Al-Maidah, 5:4)

Bafi has been a blessing to my life, among strangers and among my family and friends of different ethnic groups and religions. She has taught us unconditional love.

Bafi is color blind. She barks at people she does not trust but wags her tail whenever she is happy to be with people she likes, irrespective of gender, race, religion or nationality. I swear I believe Bafi can see through your skin, right into your heart and through your good and ill intentions. Some of my friends are big, black Africans from Sudan, Muslims too. Bafi wags happily at them whenever they come to visit, even if it is only once or twice a year. My former neighbor was a not-so-friendly Chinese uncle, and Bafi barks at him every time he comes out of his house… for four years. I had to apologize incessantly.

This month is Bafi’s tenth year on this earth. I am not sure what her date of birth is, but I know we were both born in August.  Thank you Allah, for giving me Bafi to take care and to be my companion. She is growing white hair now. In human years, she is about 60 years old. What I regret most is that I had her spayed and she can’t give me puppies. When I visited an Orang Asli’s kampung (an indigenous people’s village) in Pahang and brought Bafi with me, the Orang Aslis wanted her puppies. “She is a good hunter, look at her tongue, it has black spots. Look at her legs, they are powerful,” they told me.  Yes, Bafi can run like the wind.

So my dear Bafi, may you have more bones to chew, rivers to swim, jungles to trek and open spaces to run. May Allah keep you healthy and happy for many more years. Ameen.