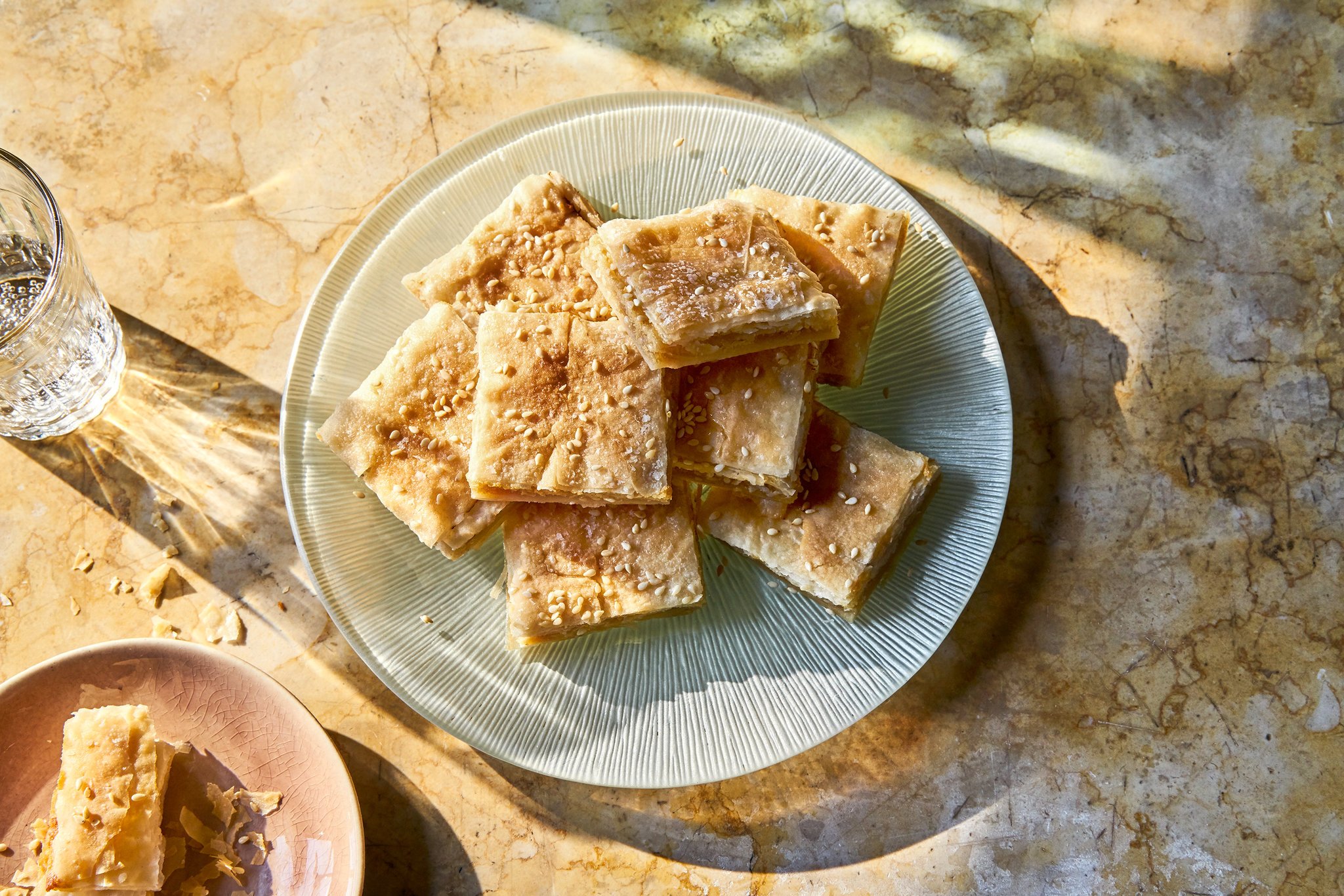 When my chin is down, my eyes are closed and my hands are cupped over my ears, it’s a sure sign that I’m tasting. I know how odd I look, but the momentary calm helps me concentrate on flavors when there’s a new recipe at hand or a complex ingredient. I always taste chocolate this way, and every once in a while I lock myself in my sensory cocoon because I’ve come upon something unusual that I want to get to know better. A couple of months ago in Paris, it was a pastry from a new, strikingly designed patisserie in the Marais, Maison Aleph.

The morsel was called 1001 Feuilles (feuilles is French for leaves or layers),

one layer more than the classic mille-feuille; its name carries a hint of the tales of the Arabian Nights. It was square, about the size of a marker for a board game, and it was, all at once, chewy, buttery, sweet, creamy, a tad chunky, nuttish and precisely balanced. It straddled the territory between baklava and mille-feuille, and it spoke of place, although I couldn’t be certain where. From the patisserie’s name, I expected something Middle Eastern — aleph is the first letter of both the Hebrew and Arabic alphabets — and knowing that the pastry was built on phyllo dough should have confirmed its origins. But the filling seemed French, as did the deep flavor of butter. The sweet was neither fully French nor Middle Eastern, neither familiar nor completely new, and it captured my imagination.

When I met Myriam Sabet, Maison Aleph’s founder and owner, I learned how closely the traditions of East and West that shape her desserts mirror her own history. Now 41, she was born in Aleppo, Syria, went to college and graduate school in Canada and moved to France almost two decades ago, when, she says, she decided, “I was mature enough for Paris.” In 2014, Sabet, who worked in finance, turned her life upside down to learn about pastry. She studied with an elderly Syrian baker in Montreal, was certified in French pastry at a Paris school and, last July, opened Maison Aleph, a small shop that attracts dessert lovers from around the world. The day I was there with her, I heard French and English and Arabic, Hebrew, Japanese, Spanish and snippets of tongues I couldn’t place at all. Once having hoped for a career in foreign affairs, Sabet looked around the room, laughed and exclaimed, “Maybe that’s exactly what I’m doing now.”

Sabet makes about a half-dozen variations of the 1001 Feuilles, each with layers of phyllo sandwiching a nut mixture in the style of baklava. One has hazelnuts from the Piedmont, one almonds from Valencia, another pistachios from Iran. The feuilles that called to me was made with sesame and halvah. As it was for Sabet, halvah was a sweet from my childhood. In Brooklyn, where I grew up, we would get it sliced to order from rounds about the size of snare drums. I knew the rich, pressed sesame-seed confection solely as a candy, but the Maison Aleph recipe for the squares’ filling used it as an ingredient to be smoothed, baked and transformed by heat.