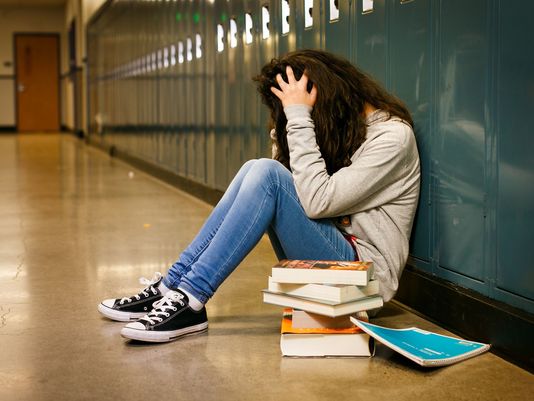 University campuses came together last fall to set priorities for the academic year, improving campus mental health services received more nominations than any other issue. It beat out even that perennial concern, tuition costs.

“We’re seeing wait times at counseling centers that are exceeding two or three weeks, people turned away after a few appointments because they’ve exceeded the maximum allotment, and students not feeling comfortable going to counselors because no one looks like them or reflects their experience,” White said.

As the stigma attached to mental health care fades, California students are increasingly clamoring for more on-campus services that can help them cope with anxiety, depression and the stresses of a contentious political climate and rising living expenses. Several bills pending in the California Legislature would set aside resources for mental health care at the state’s public colleges and universities.Mental health advocates say on-campus care is especially important because people often first experience psychological problems during their young adult years.

“It’s so much the age when serious mental illness manifests itself, and here we have these institutions that could absolutely be identifying this early on,” said Deborah Anderluh, a spokesperson for the Steinberg Institute, which lobbies for more funding for mental health treatment.

Only eight of the Cal State system’s 23 campuses meet the standard of one counselor per 1,000 to 1,500 students set by the International Association of Counseling Services—the national accreditor for campus counseling centers—according to a survey by the student association.

Many community colleges don’t have a counseling center at all, or rely on graduate student interns to provide care. The University of California system is in the midst of a five-year hiring push to add counselors on its campuses, funded by student fees.

The number of college students seeking counseling on campuses nationwide grew five times faster than enrollment between 2009 and 2015, according to the Center for Collegiate Mental Health, a national consortium. Depression and anxiety were the biggest problems.

Saba Ansari, a third-year politics major at CSU Fullerton, said panic attacks during her freshman year often kept her from sleeping through the night.

“I have very traditional, conservative parents who wanted me to become a scientist,” Ansari said. But she wanted to go into politics. And the polarized atmosphere that accompanied President Donald Trump’s election exacerbated the social pressures she was already experiencing as a Muslim woman, Ansari said. “I was having this identity crisis and feeling really threatened.”

It wasn’t until starting on-campus therapy, Ansari said, that she realized she wasn’t the only one dealing with those challenges. Her grades improved, and she took on more responsibility in student government.

But when she recommended the campus counseling center to a friend who was grieving after a death in the family, said Ansari, the friend couldn’t get an appointment.

The center staff said, “‘We’re all filled up; can you call back in two weeks?’ ” Ansari said.

Legislators are considering a proposal to ease that backlog by requiring public campuses to have one full-time counselor for every 1,500 students.

“We’ve put a lot of emphasis on how to get students to graduate on time,” State Sen. Richard Pan, a Sacramento Democrat and the bill’s author, told CALmatters. “One of the barriers is mental health issues, and we should be helping [students] overcome them. Otherwise, we’re not maximizing our investment.”

CSU and the community colleges would have to hire hundreds of new counselors to meet the ratio Pan is proposing, according to a legislative analysis. The community college system has more than 7,000 students for every counselor systemwide, according to the analysis, while CSU has more than 2,000. Staffing at the University of California is more robust, with about 1,100 students per counselor overall.

None of the university systems has taken a position on the bill. But Denise Bevly, CSU’s director of wellness, questioned whether mandating staff levels for counselors was the best way to improve care.

“One-on-one counseling may not be it for all students,” she said. Some issues might be better addressed through “a stress-management workshop, or a peer counseling group, or a yoga class.”

“There’s still a gap, if we’re honest,” between the increasing demand for counseling services and the supply, Bevly said.

The schools are doing what they can with the resources they have, she added. In June, the university will start training a few faculty and staff from each campus to be “wellness ambassadors.” They’ll be able to direct students who are struggling with mental health or  financial pressures to the right campus programs, Bevly said.

Pan’s legislation may mean the most change for community colleges. In a 2016 survey of 10 California community colleges, more than half of students said they had felt overwhelming anxiety at some time in the past year, with 39 percent saying they had been so depressed it was hard to function. One in 10 said they had seriously considered suicide.

Last year, the Legislature budgeted $4.5 million for new mental health programs at community colleges—but only 15 of the state’s 114 colleges will receive the competitive grants of up to $300,000 each.

“We see PTSD, bipolar, eating disorders and schizophrenia, but depression and anxiety are the two that really eat up our kids,” said Scott.

There’s no counseling center at her Sacramento County community college, which has two nurses for more than 30,000 students. So Scott refers students to a county crisis center several miles away. The center provides transportation, Scott says, but it’s just not practical for her to send them every student who needs help.