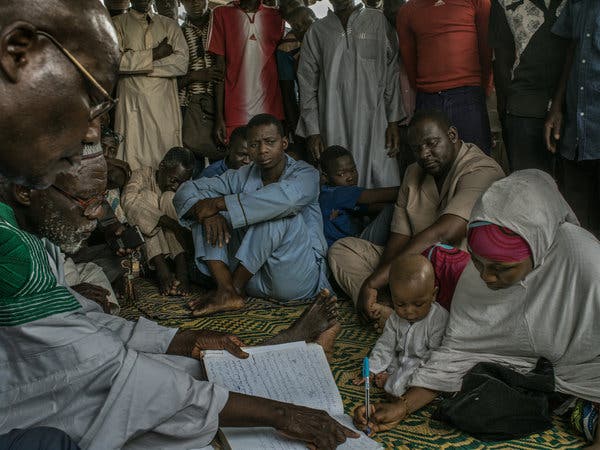 The judge Alkali Laouali Ismaël showed Zalika Amadou where to sign her divorce papers as her husband, Noura Issa, center in blue, waited for his turn at a street-side court in Maradi, Niger.CreditCreditLaura Boushnak for The New York Times

Frustrated by their husbands’ inability to earn a living, and in a society where basic views on relationships have changed, women are asserting more control over their marriages.

MARADI, Niger — He didn’t hit her. He didn’t yell. He didn’t cheat, as far as she knows. It was just that, less than two years into their marriage, Zalika Amadou’s husband had changed. He’d become far too neglectful and indifferent for a young woman who expected, well, more.

Her mother, who had gotten married at 14 to a stranger twice her age, couldn’t understand the fuss. She’d stuck with her husband for five decades until he died, and was appalled that young women these days didn’t do the same.

But for Ms. Amadou, who married at 16, simply having a husband was not enough. She never wanted to depend on a man in the first place. So, on a busy morning in Maradi, Niger, she sat in front of a judge at a crowded Islamic court on the sidewalk and asked for what young women across the region are seeking like never before: a divorce.

For centuries, women have been expected to endure bad marriages in many conservative pockets of West Africa. Divorce happened, but most often the husbands were the ones casting off their partners. Tradition has bound women so tightly that spouses are sometimes chosen for babies in the womb.

“It’s the end of the world when a husband and wife don’t stay together,” said Ms. Amadou’s mother, Halima Amadou.

But here in Niger, a place where women have less education, lower living standards and less equality with men than just about anywhere else in the world, a quiet revolution is playing out.

Many women like Ms. Amadou come to this sidewalk court every month to push for a divorce, frustrated not only by their husbands’ inability to earn a living during a time of economic hardship, but also because their basic views on relationships have changed.

They want to choose whom and when to marry, not be pushed into marriages like so many generations of women before them. They demand respect and, better yet, love, speaking openly of wanting a healthy sex life. And when their husbands fall short, women are the ones driving this new culture of breakups.

“Young women now go into marriages with certain expectations,” said Alou Hama Maiga, the secretary general of the Islamic Association of Niger. “If these expectations are not met at some point, then divorce is inevitable.”

The Islamic judge who presides over the street-side religious court in Maradi, Niger’s third-largest city, said that divorces initiated by women had doubled in the past three years, with nearly 50 women a month coming to end their marriages.

“These young women don’t want to suffer any more,” said the judge, Alkali Laouali Ismaël. “There is a solution to their problems, and they know they can find it here.”

Lawyers, women’s associations, local officials and academics who study the region say the increase is happening across West Africa — in urban and rural, as well as Muslim and Christian, areas — as women assert more control over their relationships.

The total divorce rate is relatively stable or even declining slightly in some parts of West Africa, they note, but underneath that are huge changes in divorce patterns and society at large.

Women are more educated now and in some areas marry later in life, factors that academics say lead to more stable marriages. At the same time, more women are moving into cities and joining the work force, empowering more of them to discard bad marriages.

In the sweltering waiting room of the main courthouse in Dakar, the Senegalese capital, the benches outside a divorce judge’s chambers were packed with women like Ramata Sampy, a 27-year-old accounting and management student.

Her husband, a railroad worker, was insisting that she give up her schooling and move to his extended family’s home far outside the city. That wasn’t how she had envisioned married life.

“I thought we’d be together, work together and help each other,” she said.

Dakar’s Association of Female Lawyers said it now helped three times as many female clients seeking divorce as it did even just four years ago.

“Many women in Dakar are independent and have jobs and have money,” said Daouda Ka, a lawyer who handles divorce cases. “In the past, they were just tolerating bad marriages. Now, if it doesn’t work out, they leave.”

In Ghana, 73 percent of divorce cases handled by the Legal Aid Scheme of Greater Accra were filed by women in 2016-2017, a big shift from the past. Divorce, once considered taboo for conservative Christians, is being presented in some church sermons as a better option than ending up with domestic violence or adultery.

Across West Africa, people are pouring into cities from the countryside, leaving behind parents and local traditions. The push for women’s rights has expanded, with more nations signing on to international commitments to gender equality. Governments have passed laws against domestic abuse and discrimination against women, and many nations now have ministries of women’s affairs.

In Nigeria, a Nollywood movie called “Wives on Strike,” about a group of women who band together against a bad husband and father, was so popular it spawned a sequel and a television series.

“Younger women realize that their lives do not have to end when their marriages end,” said Olajumoke Yacob-Haliso, a senior lecturer at Babcock University in Nigeria.

The new reality baffles many older people in Maradi, where Ms. Amadou sought her divorce, but the cultural shift is shouting all around them. Billboards, talk shows and even hip-hop lyrics remind young women of their rights as wives. Government-sponsored radio programs broadcast sermons teaching women that they have the right to leave failing relationships.

In the center of the city, girls sat outside a cluster of huts, plucking chickens by moonlight and gossiping about friends who had divorced. One of the girl’s aunts, Fatima Ida, 74, sat nearby, listening with a scowl.

Ms. Idi saw her husband for the first time on her wedding day and stayed with him for decades. She was sickened by all the divorce in her family: a young niece, two of her daughters, a granddaughter.

“What’s for sure is women nowadays, as soon as they feel pain, they leave their marriages,” she said.

The strains of war

Ms. Amadou spent her childhood in Maradi, a busy city of small shops and open-air markets ringed by clusters of farming villages.

It was at a wedding that a friend played matchmaker for Ms. Amadou, pointing out a man twice her age, Noura Issa, among the many guests.

Ms. Amadou hadn’t necessarily been looking for a husband. She was busy taking sewing classes that she had persuaded her family to pay for.

I wanted to be able to support myself,” she said. “I didn’t want to have to rely on a man for money.”

Still, when her friend called the next day to ask whether Mr. Issa could visit her, Ms. Amadou agreed.

He assured her he would be an ideal husband: a professional tailor who could provide a nice life for her. He was kind, and even nice to her mother.

The couple married and moved into his home outside the city center. Soon after they were settled, Mr. Issa told her the sewing classes were a waste of money. He didn’t want her leaving the house.

But his tailoring business was struggling. Nigeria’s economic crisis had spread across the border to Maradi, a major trading center between the two countries.

Already impoverished, Niger has been particularly hard hit by the spillover of problems from Nigeria, including nearly 10 years of war with Boko Haram, the radical Islamist group that has torn through the region.

A few years ago Mr. Issa was earning the equivalent of nearly $14 a day, sewing and hemming clothes. Suddenly, he couldn’t earn half that much.

In Maradi, the wartime economy has hurt nearly everyone.

Husbands often travel to look for work, historically to nearby Nigeria or sometimes farther afield. The name of the tradition shows how widespread it is: exodus.

But many areas in Nigeria are too dangerous now. Many men have been driven farther abroad, for greater lengths of time. Some don’t come home for years, adding to the strain on marriages.

“Husbands can’t support their wives the way they used to,” said Mr. Ismaël, the religious judge.

“I’m trying to slow things down”

The economic problems are compounded in Niger because polygamy is so common. Men in the mostly Muslim nation can have up to four wives. The country also has the highest birthrate in the world, with women in Niger giving birth to seven children on average.

Mr. Ismaël says most of the women who come before his court seeking divorce cite financial problems.

One by one, in hourslong court sessions punctuated only by daily prayers, young women sit before Mr. Ismaël, their divorce cases squeezed in between land disputes and inheritance spats.

Mr. Ismaël is a kadi, the judicial representative of the head Islamic religious leader in the area. He is so respected that he hears cases from across a region of three million people, and sometimes from over the border in Nigeria. He has ruled over this court for 12 years, on call 24 hours a day.

But lately, divorces make up a growing part of his docket. And while he thinks all wives deserve to be treated well, the judge said he was troubled by the rising divorce rate.

Ms. Amadou looked tiny sitting before the judge and the spectators towering over her — all men. She summed up her plea to the judge with one simple fact: After a year and a half of marriage, her husband no longer loved her. She wanted him to grant her a divorce.

Love wasn’t even a suggestion when her mother was married. Still, she sat there supportively as Ms. Amadou rattled off complaints: Her husband didn’t bring home food; he didn’t care about her when she was pregnant; he didn’t even visit her at the health center when she was in labor.

“I could have forgiven everything else,” she said. “But I was on the brink of childbirth and he didn’t come.”

He never had time to give her the tailoring lessons he promised, and they lived on the edge of town, far away from her mother. Mr. Issa wouldn’t let her leave home without permission.