By Abdirizak Bihi for MALA 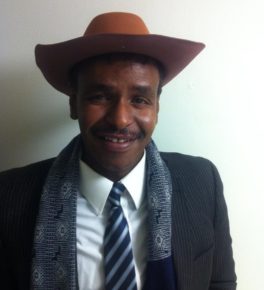 Bihi fled from Somaliland due to war and conflict. In his eloquent story, he describes his journey to America, and how he remains committed to help his community overcome cultural and language barriers in Minneapolis.

This story was recorded in partnership with StoryCorps and MALA. Production credits given to Sydey Jarol at StoryCorps in Chicago.

"I fled from Somalia, way before the civil war, because of the regime and I came to the United States. Then in 1991 Somalia collapsed, as a state, tons of thousands of people fled to neighboring countries. I decided to come to Minnesota because that’s where the Somali refugees were headed. And I decided to work and help them. They had two major issues; cultural and language barrier. I learned the language is really not the main thing, it’s the cultural, to understand how things work in a new environment, especially when you come to the first world when you come from the third world. Especially when you come from a dictatorship, and war, and religious extremism, and you come to a country where you have the right to worship whatever you want, the right to live in diverse society.

So I worked as an interpreter and a cultural counselor. I helped establish a department called Hennepin County Multicultural Project, where we could help the newcomers to navigate Hennepin County so they could learn about the services and how to access them. I would help people find affordable housing, access healthcare, find jobs, and also educate Somalis at that time about America. It’s really a huge thing to educate people about freedom; that you have the right to raise your voice: about the conditions you live, about the jobs you need, about the school system. And they learn those things and it’s amazing how they use them.

For example, I started to get the vote. The first time I asked the community to vote, I got about 120 people. Today, thousands and thousands of them vote. We have elected our first Somali American Minneapolis city council member. We have even female candidates that are running for state legislature in our community. And that second generation, the resilience in this community, is amazing. We continuously face a lot of challenges; in a state where unemployment is 3%, Somali Americans face 35 to 40% unemployment. The level of poverty in this community is alarming, but at the same time you see a lot of success.

And that is one of the things that really makes me continue this job. It’s challenging, but it’s also rewarding, because you see that you’re making impact on people. And you inspire people, and they do the same thing, and we’ve come so far. I mean, Somali halal stores, Somali home-keeping businesses, and Somali malls, that are hiring people that are contributing to the work we do. And I invite everyone to come to our neighborhood. If they’re Muslim we’ll take them to the mosque, if they’re not and they want to have a beer, we’ll take them to the bar next door. There’s no Sharia law here, this is real America."