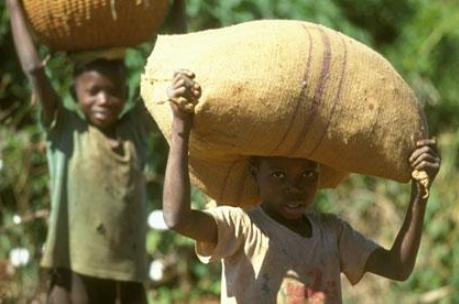 The recent Ghana Labour Standards Survey (GLSS-6) has shown that 21.8 per cent, representing 1.9 million children aged between five and 17 years out of the over eight million nationwide population, are engaged in child labour.

The Ministry of Employment and Labour Relations says the statistics released in August 2014, represented an increase over that of the 2003 Ghana Child Labour Survey (GCLS 2003) of 1.27 million child labourers, out of a population of six million children.

It said in the GLSS, the proportion of male children in child labour was slightly higher representing 22.7 per cent, than females which stood at 20.8 per cent, with children in economic activity higher, amounting to 39 per cent in rural areas than the urban 16.8 per cent, and more of these children worked in the agriculture, fishery, mining and service sectors.

Globally an estimated 168 million children were engaged in child labour and worked under dangerous and hazardous environments with little or no protection exposing them to injuries, toxic substances and all forms of physical, psychological and emotional abuses.

Mr Bright Wireku-Brobey, the Deputy Minister of Employment and Labour Relations, at a media launch of the 2017 International Day against Child Labour in Accra on Wednesday, called for strengthened stakeholder collaborations, and appealed to journalists to re-engage themselves to create a more vigorous and sustained momentum in their coverage of issues regarding the fight against the pervasive social canker, because government alone could not address the menace.

He together with other Child Rights activists including the International Labour Organisation (ILO), condemned the menace in their respective addresses, saying although unacceptable, the menace continued to be prevalent, especially in many deprived communities, where opportunities were dwindling, with every fifth child being directly affected and more than one-in-ten children (14.2 per cent) engaged in the worst forms, particularly hazardous works.

Mr Wireku-Brobey said the annual event which fell on June 12, was instituted by the United Nations, and focused on the global theme: “In Conflicts and Disasters, Protect Children from Child Labour”, to address the devastating impact of these situations on people, particularly children in areas disposed to armed conflicts and natural disasters.

Ghana, he said, had however domesticated the theme by focusing on “Mobilising Resources for Effective Implementation of NPA 2”, which was currently before Parliament awaiting its approval, and expected to span from 2016 to 2020 when passed.

He said children formed more than half of the 65 million people globally who were presently displaced by war, and the socio-economic impact on the development of affected countries were clear, as child labour affected the transition paths of youths and their eventual employment outcomes, minimising their opportunities for decent work in adulthood, while approximating them to poverty.

The National Plan of Action II, (NPA 2) among other things, called for coordinated actions aimed at stronger integration and early addressing of child labour in humanitarian responses, targeting root causes of the problem through education, social protection, livelihood interventions and access to decent work for adults, and upholding the human rights of refugee and displaced children from child labour and trafficking, he said.

He said there was much work to be done, however challenges such as the non-availability of resources and lack of socio-political commitment hindered the sustenance of the gains made and further progress.