By Diane Cole for NPR 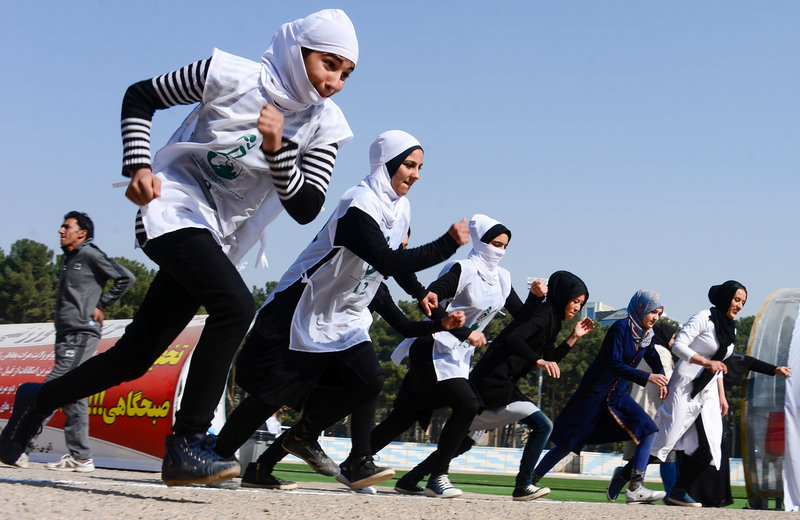 It's a story with a happy ending about a demonstration that didn't happen — after activist Afghan women beat back the Ministry of Education decision that schoolgirls must exchange their current already modest uniforms for styles that are more restrictive and concealing. 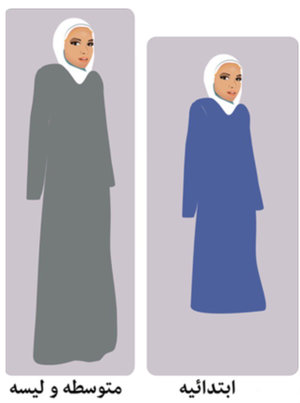 The proposed uniforms from the Ministry of Education for elementary school girls (right) and middle school and high school girls (left).
Ministry of Education, Afghanistan
On March 14, the Afghan ministry unveiled the new designs. Schools in the country were closed at the time (the school year in Afghanistan goes from March through January and set to reopen on the 20th or 21st. The ministry said the change would be effective when classes resumed.

The change was the result of complaints by schoolgirls about the color of the uniforms, according to Afghan news reports. They were black, which absorbs the heat in the already hot summer months when Afghan schools remain in session. In addition, they said, girls found black a sad, unhappy color. That is why the new uniforms would be blue for primary school girls, grey for middle schoolers and navy blue for high schoolers. As before, the new uniform also required girls to wear a white scarf on their heads.

But changing colors was not what upset Bahar Sohaili, 31, a women's rights activist in Kabul. She had gone to school in Afghanistan before the Taliban took over, had herself worn a black uniform back then, and in fact agreed that wearing black makes you hot and shows the dirt in the very dusty environment that is Afghanistan.

The problem was that the new uniforms were replacing uniforms that consisted of black dresses that hit just a few inches below the knee and were worn over pants leggings — a design that served the ultra-conservative Afghan society's mandate for modesty and also provided enough flexibility for girls to walk and participate in sports.

Not so the new design, which mandated that elementary school girls as young as five would have to wear tunics that would fall several inches below their knees; for girls 12 and up, the tunics had to extend all the way to the floor. And although the head scarves would continue to be required and would still be white, they had to conform to a style that no longer allowed bangs to show but would have to conceal every strand of hair, as is the custom in Iran.
"They are telling us the length is to protect Islamic values," said Sohaili.

But she believes that the changes were unacceptable for several reasons. First, they are not practical. "Students have to be comfortable, they need to be able to exercise." And in a country where terror attacks are commonplace, girls may need to literally run for their lives without being impeded by lengthy gowns that could make them trip and fall.

To protest, she and others began to organize a demonstration for the coming weekend – that would have been March 18th and 19th.

Freshta Ibrahimi also opposed the change. She's a graduate of the American University of Afghanistan who lives in Kabul and is now the program coordinator for Ascend, a team of women mountaineers, "We women in Afghanistan never want to go back to Taliban era," when women were forced to wear burkas, she wrote to NPR in an email. "If women accept this uniform for me means that government will also design another role for women. Women in Afghanistan want to experience freedom, it will happen if all women stick together."

Word of the controversial uniform spread in the community of Afghan women both at home and abroad. Maihan Wali, an activist with the Global Citizen and Global Changemakers organization who is currently a senior at Gettysburg College in Pennsylvania, voiced her protest on social media, staying up until 4 a.m. when she learned of the protest, on Tuesday, tweeting friends and brainstorming online on how to target the Afghan government to retreat. From London, Afghan writer Zuhra Bahman also began an online petition to oppose the uniform change.

"Women need to be able to decide what they can or cannot wear, and that starts when they are in school," Wali said. Her intense drive to get the word out to protest was further driven by the knowledge that families needed to know as soon as possible whether they would be required to buy new clothes for their children for the new school year. "We had to take action as fast as possible" in order to prevent families from "suffering economically by starting to buy these clothes," she said. Not everyone can afford to buy new clothes every year, and it would cost a lot."

Then on March 16 the government backtracked, issuing a statement that read: "President Ghani says the new school uniform which was announced by the Ministry of Education is not representative of the culture and tradition of the people ... He has directed the Ministry of Education to work on a new design that is affordable together with a nationally representative group of teachers, parents and students."

At that point, Sohaili called off the protest. But she's definitely going to keep an eye on the pending uniform design.

Diane Cole writes for many publications, including The Wall Street Journal and The Jewish Week, and is book columnist for The Psychotherapy Networker. She is the author of the memoir After Great Pain: A New Life Emerges. Her website is dianejcole.com.