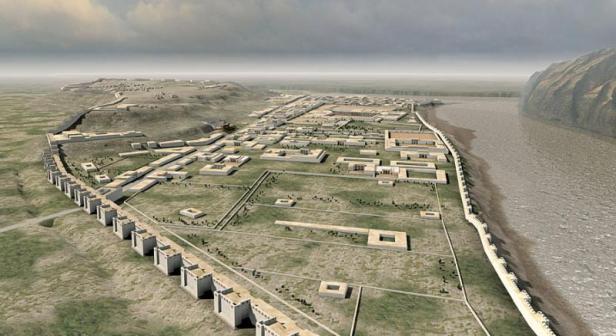 In 1961, King Mohammed Zaher Chach of Afghanistan was on a hunting trip in Takhar province of north-east Afghanistan. It was during this expedition that he stumbled across the remains of an ancient settlement. Three years later, a group of French archaeologists led by Paul Bernard began excavating the site. What they uncovered proved to be one of the more remarkable relics of the ancient world.

It was a major urban centre unlike any that had previously been discovered.

Ancient ruins are not hard to come by in Central and Western Asia. The entire region is littered with them. However, what made this settlement, known as Ai-Khanoum (‘Lady Moon’ in Uzbek), special was the fact that it would not have looked out of place in Ancient Greece.

Indeed, it had all the hallmarks of a Classical Greek city; a large gymnasium (one of the largest in the ancient world), a 6,000 seat amphitheatre, temples to Greek gods and a number of Greek-style houses, complete with collonaded courtyards. Even the city walls were built in the Greek style. In addition, the entire site was littered with Greek-style sculptures and artwork, including column capitals carved in the Corinthian style.

So what was this place and how did something so distinctly Greek come to exist in a far corner of Afghanistan?

Given it was located alongside the Amu Darya river (known historically as the Oxus), it was posited that this was the lost city of Alexandria on the Oxus, one of around twenty such cities founded by Alexander the Great and named in his own honour in the late 4th Century BCE. The most famous of these cities was the first Alexandria, located in Egypt and destined to become the greatest city in the ancient world.

However, more recent research, particularly the dating of artefacts found at the site, has suggested that the city was founded later, around 280 BCE, by Antiochus I, King of the Seleucid Empire.

Regardless of when it was established, Ai-Khanoum represents the pinnacle of the ancient phenomenon known as ‘Hellenisation’. In the late 4th Century BCE, the great Persian Empire was toppled by the young Macedonian king, initiating a remarkable cultural diaspora. Alexander and his army essentially brought Macedonian/Greek culture with them wherever they marched. As part of this, Alexander established new settlements in strategic locations, populating them with Macedonian and Greek settlers. Though his colossal empire collapsed following his death, the Diadochi ( ‘Successors’) who carved up the empire between themselves began the process of Hellenisation in earnest. This was the Hellenistic period, which began with Alexander’s invasion and ended with the death of Cleopatra of Egypt in 30 BCE. During this period, Greek culture was in the ascendency from Greece itself to Egypt and as far as modern Afghanistan. The result of this amalgamation was a distinctly Greek culture that nonetheless had recognisable local influence. One manifestation of this can be found in one of the main temples at Ai-Khanoum, which was dedicated to and housed a large statue of Zeus but was built in the Zoroastrian style with huge enclosing walls rather than the open, columned structure found in traditional Greek temples.

The motivation for Hellenisation has long been debated. The ancient Roman historian Arrian suggests that it was a deliberate attempt to ‘civilise the natives’. However, modern historians have largely dismissed this argument. After all, Alexander famously began adopting Persian dress and elements of Persian court culture in the years before his death, much to the resentment of his followers. Instead, it is more likely that the establishment of new settlements was in response to the enormous administrative challenges that came with an empire of such massive size. The new colonies were likely intended to serve as centres of Macedonian power and control in newly conquered regions.

The Seleucid Empire was arguably the greatest of the Successor states, at its height encompassing almost all of the former Persian empire, with the notable exception of Egypt. During the reigns of Seleucus I Nicator (the founder) and his son Antiochus I, the number of new settlements expanded rapidly. These colonies were populated by settlers from Macedonia and Greece itself, drawn so far from home by generous incentives. Interestingly, settlements inhabited by Macedonians were generally established further to the west, while those inhabited by Greeks appear more in the eastern provinces of the empire.

Ai-Khanoum was one such settlement. The region in which it was located, Bactria, represented the eastern fringe of the empire. Situated in the Oxus valley, the settlement had access to rich agricultural lands, as well as substantial mineral resources in the foothills of the nearby Hindu Kush mountain range. Perhaps most importantly, Ai-Khanoum was perfectly positioned to act as a trade hub with the Indian subcontinent via established trade routes through the Hindu Kush.

Bactria and nearby Sogdiana and Ferghana had always proven difficult for even the Persian Empire to control, chiefly as a result of the sheer distance of these fringe provinces from the heart of the empire. After all, the city of Bactra, from which Bactria derives its name, was over 2,800kms (1,730 miles) from the Persian capital at Babylon (in the vicinity of modern Baghdad). For the Seleucids that distance was even greater, with Bactra some 3,700kms (2,300 miles) from the capital at Antioch (near modern Antakya, Turkey).

Unsurprisingly, these eastern provinces would prove troublesome for the Seleucids. Around 250 BCE, Diodotus, the Satrap (governor) of Bactria, broke away from the Seleucid Empire and declared himself King of Bactria, thereby founding the state known among historians as the Greco-Bactrian Kingdom. Along with Bactra, Ai-Khanoum was one of the largest and most important cities in the fledgeling kingdom.

With the Seleucids focused on the ongoing jostling with the other Successor states in the west, the Greco-Bactrians were able to expand their influence in the east. Greco-Bactrian control was extended to include nearby Ferghana under King Eurythdemus, who had overthrown Diodotus II sometime between 230 and 220 BCE.

However, the Seleucids would return to reestablish their control around 210 BCE, when Antiochus III the Great reached the easternmost point of his great campaign to re-conquer the eastern half of the Seleucid Empire.

Once again, Ai-Khanoum and the rest of Bactria and Ferghana was part of the Seleucid Empire. However, this was not to last. Indeed, almost as soon as Antiochus and his army departed for the west, the Greco-Bactrian Kingdom reestablished its independence. This second coming was to prove the dawn of a golden age for the Kingdom, which began to prosper as it expanded in all directions, reaching its territorial peak in 180 BCE.

During these decades, Ai-Khanoum continued to grow in importance in its role as a trade hub with India. It is a testament to the level of Greek interaction with India and the influence of urban centres such as Ai-Khanoum in the region that even as early as 258 BCE Ashoka, ruler of the Mauryan Empire (the dominant state in India), created the so-called ‘Kandahar Edict of Ashoka’, a bilingual rock inscription written in Greek and Aramaic. Another of Ashoka’s inscriptions near Kandahar was written solely in Greek. The actual content of these edicts also gives a clear indication of the level of exchange between India and the Hellenistic world.