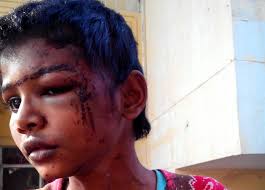 The juvenile housemaid allegedly tortured by the family of an Islamabad additional district and sessions judge, has been recovered, police sources told DawnNews.

Police sources said that the girl Tayyaba was recovered from a house in the suburb area of Islamabad.

Meanwhile, Islamabad police officials are reluctant to either confirm or deny the development, saying that the matter is sub judice so they are unable to comment over the issue.

The 10-year-old had been working as a domestic servant at the house additional judge in Islamabad when she was recovered by police 24 hours after a neighbour complained that Tayyaba was being severely mistreated by the couple.

The judge and his wife were facing an inquiry for their alleged involvement in keeping the juvenile housemaid in wrongful confinement, burning her hand over a missing broom, beating her with a ladle, detaining her in a storeroom and threatening her with dire consequences, when a person claimed to be the father of Tayyaba appeared before a court of law and forgave the accused.

The Supreme Court (SC) had on Friday ordered DNA tests to confirm the identity of the parents of the 10-year-old child maid who was allegedly tortured by her employers ─ an influential judge and his wife ─ and ordered a full police probe into the allegations.

The court took suo motu notice of the case after the girl's parents 'forgave' her alleged tormentors. The location of the child is presently unknown.

Adding to the confusion, two women previously unheard of appeared before the Chief Justice of Pakistan (CJP) Mian Saqib Nisar in court today, each claiming the girl in question is their child, after which the judge requested DNA tests.

CJP Nisar, who is heading a two-member bench hearing the suo motu case, remarked, "No 'agreements' can be reached in matters concerning fundamental human rights."

"Even parents cannot deny children their fundamental rights," the judge observed. "How did they reach a settlement on torture against the child?"

Pims Vice Chancellor Dr Javed Akram said there was no doubt the child had been tortured.

"During her first visit to the hospital, the child claimed she was burnt while trying to switch on the television. But the wounds indicated that a hot iron rod had been placed on her arm," he said.