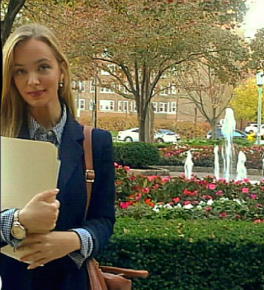 Anxhela Ndrio is a current freshman at Loyola University Chicago. She shares her unique perspective as an immigrant to empower people of all backgrounds to stand up and take action to help change the refugee crisis in Syria.

I will never forget a man by the name Dr. Ghaffar Kazkaz, – a retired Syrian engineer and physics professor I had the pleasure to meet a few months ago, during a networking conference with the Arab American Bar Association. Being an intimidated 17 year old in a crowd full of businessmen and renounced intellectuals, I hesitantly introduced myself as the founder and executive director of a local refugee non-profit, hoping to receive valuable advice about my philanthropic ambitions. Just like me, Dr. Kazkaz had come from far away, from a city named Hama. “ It was beautiful. The houses, the little shops. One of the most beautiful cities of Syria,” he said, his eyes widening with awe, as if he spoke of a fairytale that no longer existed. And indeed, it no longer had. “ The people of Hama are dying, the shops are bombarded, and I am not too hopeful about this war,’’ he added. Dr. Kazkaz looked down in disbelief and took his glasses off; wiped away tears that had now traveled down his white mustache, and shook my hand with gratitude.

My name is Anxhela (Angela) Ndrio, and I attend Loyola University as a freshman. I am double majoring in Political Science and International Business, as well as minoring in Economics. I am the daughter of a Muslim and a Christian Orthodox. My father Stefanos, and my mother Zinete, met in Albania in their early twenties, as young teachers, coming from opposite religious and ethnic backgrounds. Their love was socially unacceptable — prosecutable in extreme cases, therefore they ran away to the country that is very dear to my heart and theirs — tiny, beautiful Greece, located in Eastern Europe, surrounded by the Mediterranean Sea. They were what I now call “refugees of love;” two human beings forced by their social and political circumstances to flee in order to peacefully coexist.

Unlike my parents, 60 million refugees nowadays are not simply stuck in a dilemma of love, but rather, one of life and death. Doctors in Syria are deciding which three year old gets to use the one hospital bed available. Mothers in Afghanistan and Somalia are fleeing turmoil only to end up washed ashore, their every fiber of human dignity withering away, decomposing among hopes and dreams that were paused, a life they dreamed of but never attained. I have been fortunate not to live through a capsized boat and lethal regime, though speaking of human dignity, I can attest that the dignity of a person who abandons their home is pulled apart, tied in a knot, and dismantled little by little, on a quest to make amends with their newest curse, their newest blessing: their place in the world as an “outsider.”

I was born and raised in Athens, Greece, baptized in a Greek Orthodox Church, and taught by an Orthodox priest in my local public school. I’d often come home to my Muslim grandparents, we’d all celebrate bajram or Eid, and I was indeed living in a home of two religions that I did not recognize were “separate.” I have now found out people use them as a means to justify wars and systematically construct barriers, which, to me, remains a mystery. Growing up exposed to both Islam and Christianity has taught me my first lesson about humanity: It knows no borders, no boundaries; it does not dwell on antiquity. And I took that same lesson, put it in my pocket, and carried it through my journey to the dreamy, freedom-promising United States, as a child immigrant and full-time outsider.

When people notice my accent and ask me where I come from, they look utterly mesmerized when I answer “ Greece.” I can tell they picture heavenly white-blue landscapes and undeniably delicious food. But what I picture is my home; I picture myself falling in love with writing, I picture my 11 classmates and I playing futbol with a ruffled ball made out of notebook paper and tape; I soon picture the Greek crisis emerging, homelessness, desperation, and massive xenophobia sweeping through the nation, with Neo Nazi political parties paving the way for hate, race crimes, and violence against refugees that fell victims of nationalist retaliation. Mind you, refugees are not a recent phenomenon; they have existed for as long as oppression has, and If Greece could not sustain “ its own people, its own race” it was an axiom that it had no place for anyone else. This is a prominent excuse that has found its way across the globe, in context of the current refugee crisis; an excuse that is not used so much by little Greece anymore, as it is by big U.S.A. And that is when turning our back to humanity ceases to become an issue of resources; it becomes an issue of compassion and tolerance, paired with cultural and political biases that undermine one very important fact: That there is one race in this world; the human race.

I watched the country I dearly love become labeled as “a place of no future.” It was well predicted that my parents would lose their jobs — as did a great chunk of the Greek population, starting with the immigrants and non-Greek natives. Soon, I found my 12 year old self packing my life in a black, medium sized suitcase — the one I repeatedly kicked down and refused to drag along, frantically begging my parents to go back, promising that if we went back, I’d be good –I’d be so good; I’d study all the books in the world, get a job and keep it forever, build my parents the house they’re so desperately trying to find outside of Greece — my Greece. But I was now flying 40,000 ft above its shadow, with the lightest carry-on and heaviest heart; the same heart that sinks to the bottom of every child who contains the image of what home was once like; whether an immigrant, whether a refugee.

I flew away, leaving behind a huge part of my identity, every experience and memory that had shaped me as a person. The more out of place I felt in my new, unfamiliar world, the more I created an Athenian Utopia in my head. And that is the one incontestable curse that follows every outsider: dwelling on the beautiful past, with every hardship of the present. I left behind my inspiration to paint and write stories, and fought a continuous battle to translate pieces of it, little by little.

The truth is, from the second your feet land in snowy American ground — or any foreign ground for that matter, your limits are tested, every aspect of your knowledge and identity is challenged, and there is nothing in the world that can prepare you for that. You live through a language and culture you cannot comprehend, get lost on identical streets, unable to formulate a question andask for directions. But although that is unfortunate, it also becomes the mere strength that pushes you forward. You see, an outsider is equipped with the ability to continuously adapt, despite being repeatedly kicked in the face by unbearable circumstances. You exit your comfort zone, suffer through culture shock, watch your parents slave through minimum-wage jobs, and despite fighting a battle you never wanted to enter, you make it out alive — alive enough to tell your story and offer something incredible to this world. I watched my mother go back to school at 42 years old, I watched my sister study medicine. I watched the beauty of human adaptability, stemming from continuous hard work, and from conducting research, fundraising, and advocating for children’s rights in countries of conflict, I found m y place in this world, as well as embraced the absolute strength required to be born again, in a new country.

That same strength comes with valuable cross-cultural experience that leads to nothing less but greatness and innovation. I have had the pleasure to work with countless of innovative children refugees whose intellect and maturity is extraordinary, and I urge people in Greece, the U.S, and every part of the world, to consider that excellence holds no ethnicity, and no religion. Most importantly, I urge people to see that among refugees, lies a reflection of themselves.

My experience with religious and ethnic diversity has brought to my attention that there is substantial amount of work to be done, in terms of creating a humane and just world. I have come to see that with every struggle, comes a success story, and with every success story, comes a legacy. I have also come to see that the world is full of hopeless individuals who remember what their home was like before hate left it in shambles. I am confident that although we cannot fully eradicate oppression and hate, we c an ease the pain that arises from their consequences, and instill back the one, precious, thing that is stronger than fear: hope; because when compassion meets hope and a story is told, It all becomes a matter of turning ideas into action.