By Steve McCurry for The Guardian

Three decades ago, my photograph of Sharbat Gula became famous as a signifier of migrants’ dignity and determination. Now Pakistan is using a new image of her to spread fear among refugees

Steve McCurry poses next to his photos of Sharbat Gula, the ‘Afghan Girl’, in 2013. Photograph: Ulrich Perrey/AFP

I first encountered Sharbat Gula in 1984, in Pakistan, when she was an orphan living in a refugee camp just outside of Peshawar with her grandmother and siblings. One of the photographs I took of her became known around the world as Afghan Girl. She became the face of refugees for many years.

Today, more than three decades later and despite having one of the most famous faces on the planet, Sharbat Gula is still a displaced person – one who is now facing up to 14 years in prison for the same reasons that brought her to a refugee camp all those years ago. With her arrest last week for living illegally in Pakistan and her current imprisonment, she is now being made into a symbol of unwanted migrants around the world.

Gula is one of the estimated 3 million Afghan refugees who currently reside in Pakistan. A widow and an orphan, she has lived in the country virtually all her adult life. She has endeavoured to raise her four children alone. She represents all the brave women and men who will endure any pain and hardship to protect the most precious thing they have – their children.

Last week authorities from Pakistan’s Federal Investigation Agency raided her apartment and arrested her for allegedly having false identity documents. She could face deportation, prison and fines of up to $5,000. Her bail has been denied. I find Gula’s treatment by the authorities impossible to understand. They seem to want to humiliate her, and appear to have gone out of their way to treat her with disrespect. 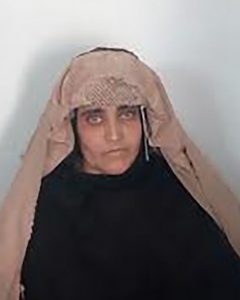 ‘When I first saw Gula’s arrest shot, I was saddened by the apparent attempt to humiliate and debase her.’ Photograph: HO/AFP/Getty Images

Hundreds of thousands of other Afghan refugees face the same situation. The United Nations Refugee Agency has estimated there are 1 million unregistered Afghans living in Pakistan. Gula’s situation is not unique, and in the media circus of the past week it seems she has already been tried and found guilty in the court of public opinion.

The strength of the picture I took, its success, has to do with Sharbat Gula and her expression: her eyes and their gaze, that fierce look of dignity and determination. It’s an honour to be the photographer who took that iconic picture. It has stood the test of time, which is a testament to the picture, but mostly to Gula herself.

Seventeen years later, I went looking for her and was reunited with her, and it was extraordinary. I was thrilled that she was still alive. Gula didn’t know that her picture had been published all over the world, but in time she understood. She did remember that I took her picture that day because it was the first time in her life that she had been photographed. The second time was when I was reunited with her.

That fact reminds me of what one of her relatives told CBS News this week, that she is a “simple, illiterate lady” who may not understand legal documents. For over a decade, she didn’t realise that millions of people knew her face. Gula’s relative said that she was set to return to her father’s village in Afghanistan this summer, but had been delayed because of the supposed presence of Islamic State elements nearby.

The raid on her home last week was, I believe, politically motivated. Many believe she was targeted. As her face once symbolised the hopes of countless refugees, the image of her post-arrest mugshot circulated last week was meant to instil fear into other refugees – and to turn the minds of others against the migrant population.

When I first saw that arrest shot, I was saddened by the apparent attempt to humiliate and debase her; but at the same time, I saw that same gaze I first glimpsed decades ago in the Nasir Bagh refugee camp, when an orphan girl stared back at my lens with a proud, haunted look. Sharbat Gula’s face, now older, is once again a symbol of the refugee’s plight.