By Lee Lawrence for The Wall Street Journal

History, politics, art and, of course, religion are explored in an illuminating exhibition. 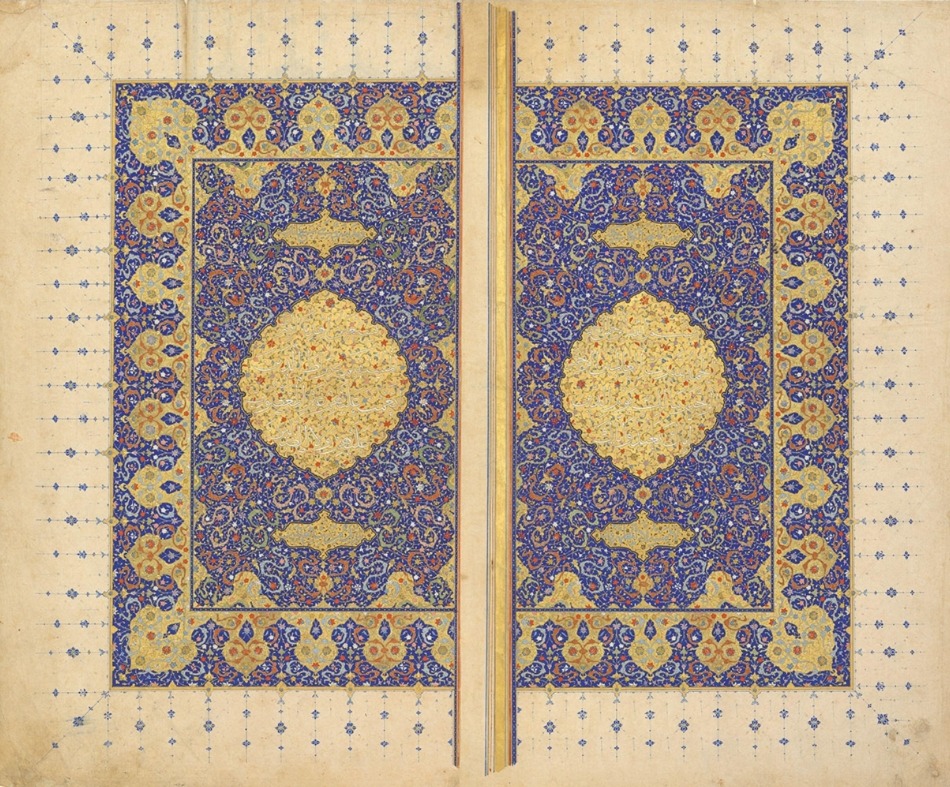 Devoid of illustrations, written in a language only one half of 1% of Americans speak at home, and associated with a religion some terrorists invoke when committing mass murder—the Quran is an ambitious, courageous and somewhat fraught choice for the subject of a major museum show. Hats off to the Smithsonian’s Freer-Sackler for tackling it. “The Art of the Qur’an: Treasures From the Museum of Turkish and Islamic Arts” may use the occasional decorative object to add visual interest in a gallery, but its focus never wavers from the book—when and how people penned its text, the mesmerizing illuminations and bindings it inspired, and the history of individual volumes. 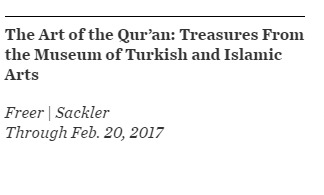 As the show’s subtitle indicates, most of the manuscripts and folios are on loan from Istanbul, and pretty much every one has had a long journey that began with a member of the Ottoman elite who commissioned, collected or acquired the Quran as gift, loot or inheritance. Many owners later donated them to different mosques, madrassas and other institutions. Then, in 1914, the state founded the Museum of Turkish and Islamic Arts to safeguard and exhibit these dispersed treasures. About 45 of such folios and manuscripts are on display along with some 20 from the Sackler and its sister gallery, the Freer. Together, they span almost 1,000 years of spectacular artistry.

A sheet of parchment bears only lines of angular, architectural letters penned in the ninth-century; by contrast, 15th- and 16th-century examples sparkle with gold and jewel-tone illuminations. A small, well-worn 11th-century Seljuq Quran fits the hand, while pages from a volume made around 1400 in modern-day Uzbekistan reach almost 6 feet in height, the work of calligrapher Omar Aqta’, who had hoped to impress the Mongol ruler Timur with his giant script.

Muslims prize the Quran—derived from the Arabic “recitation”—because they believe that it contains revelations the God of Abraham and Moses made to an Arab trader named Muhammad ibn Abdullah over the course of 23 years. After Muhammad’s death in 632, as variations cropped up and many who could recite the text from memory fell in battle, the caliph ordered an official transcription. The book’s 114 suras, or chapters, were ordered longest to shortest rather than chronologically, a decision that has fueled many a theological and scholarly debate. Knowing a sura’s date, for example, could determine whether it addressed a particular historical situation or was superseded by a later revelation.

While the catalog essay by scholar of Islam Jane McAuliffe touches on some of this, the show’s section on the Quran’s content stresses parallels with Christianity and passages that treat women equitably. These are all accurate, but in the current political context many might dismiss such emphasis as disingenuous. Better perhaps to embrace the very thing that feels too hot to handle and also recognize that the Quran, like many religious texts including the Bible, contains contradictions and statements that some have used to justify violence and the suppression of women. 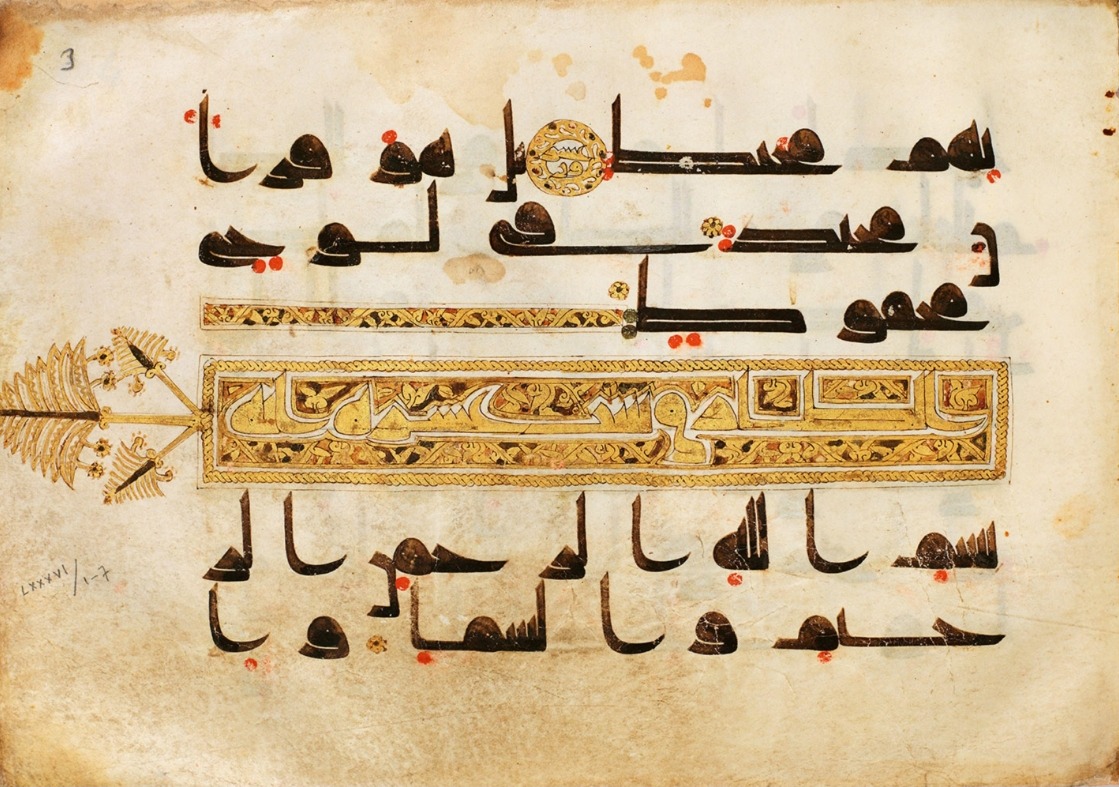 That said, this does not detract from how superbly co-curators Massumeh Farhad and Simon Rettig explore the Quran’s evolution as art. As we step into the first gallery, for example, a male voice intones verses in Arabic while, on a large screen, a golden script unfurls, introducing the voice as the Quran’s primary instrument, not the pen. The curators then illustrate the shift from oral to written transmission in a particularly effective sequence that begins with a page from a late seventh- to early eighth-century manuscript. Tightly spaced lines cover the entire sheet, providing a no-frills aide-mémoire to keep recitations on track.

Very quickly, though, embellishments emerged. They range from the charmingly naïve—in a folio penned before 725, a colorful palm tree marks the chapter break—to increasingly complex geometric and vegetal designs. Illuminators variously encased verses, filled the spaces between lines, punctuated the text with sunbursts, embellished margins with palmettes and cartouches, added border motifs that binders then reprised, and created frontispieces as dazzling as the gateways of palaces.

Calligraphers, too, displayed creativity. By the ninth century, they had adopted a new, majestic script known as kufic, which some continued to use in chapter headings even after more rounded scripts came into favor. Calligraphers sometimes alternated lines of gold and black, wrote on dyed paper, or translated terms in marginal asides. Always they played with the length and spacing of strokes, the placement of words on the page, the density of the text.

Seen in purely graphic terms, every Quran expresses a mood and tone—authoritative, melodious, lively, solemn, joyous. Although their appearance in no way dictates how the text should be read, it is tempting to see in them a magnificent visual echo of the melodic styles in which male and female reciters intone the Quran.

—Ms. Lawrence writes about Asian and Islamic art for the Journal.