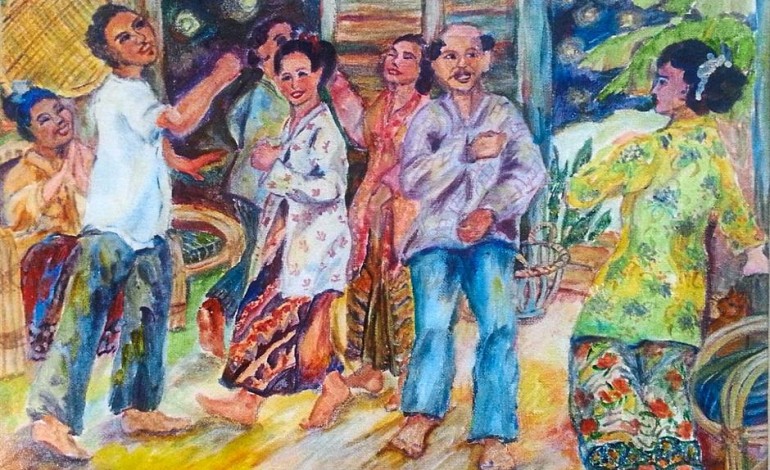 The acrylic on canvas Jingli Nona depicts an evening of dance at the Portuguese Settlement in Malacca; its part of Tianne's Ethnic Heritage series.

Dreamer, observer and taxidermist of the things we might lose – visual artist Christianne Goonting Devaser, better known as Tianne, seeks to preserve the ephemeral in her works across various media.

An artist since her KL debut in 1981, Tianne, 55, is now based in Sabah. She left KL in 1985, and has exhibited her works at over 100 shows in Malaysia, Sri Lanka, Singapore, Brunei, Cyprus, Brunei, Australia and Japan.

She believes that some of the most precious things we have are all the more so precisely because they are fragile – things such as cultural heritage and nature – and seeks to pickle them in paint (and other media).

Tianne feels keenly that heritage encompasses both history and identity.

“We are moving into a future of very mixed parentage which may – or may not – dilute this identity. Documenting ethnic treasures like customs, traditional clothing, head dresses, dances and games helps to remind us that we have roots, that there is somewhere we belong and we should be aware of and proud of that,” she says.

Perhaps the question of preserving a potentially lost heritage has particular resonance for a Eurasian.

Tianne’s roots lie in the Eurasian community, which grew out of inter-marriages – starting from the 16th century – between Portuguese, Dutch and British colonisers, traders and sailors, and locals in Malaysia (Goonting is a surname with Dutch origins). It’s a small ethnic group, and it’s growing smaller, as more members inter-marry with with people of other ethnicities. Tianne embraces the changes, but wants to preserve some of the past for the future.

Without a doubt, cultural identity is an issue that strikes close at the heart of the Selangor and Federal Territory Eurasian Association (Saftea). 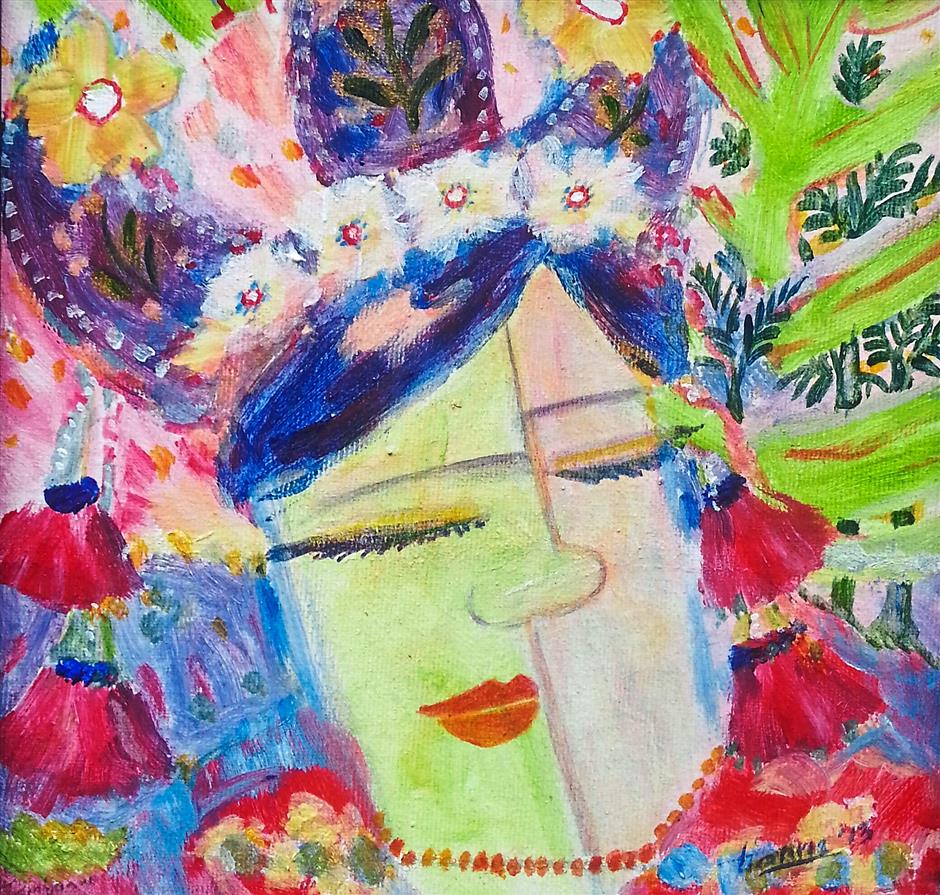 Bisaya Girl. The Bisaya live in the south-west of Kota Kinabalu, and are heavily dependent on sago crops.

Tianne’s last showing in KL was in 2004, at the association’s old clubhouse in Jalan Pudu. It was held in conjunction with the launch of Linggu Mai (Mother Tongue), a book by Kristang language and cultural activist Joan Marbeck; Tianne created some of the illustrations for the book.

Some 12 years later, Tianne returns to Saftea – now housed at the Duta Vista Executive Suites in Taman Duta – with a week-long exhibition themed Art Mix: An Exploration In Colour. It starts today, and will run until Nov 11.

“Most of them were done in the last three to five years, although some date back further than that. They’re all from my private collection,” says Tianne. 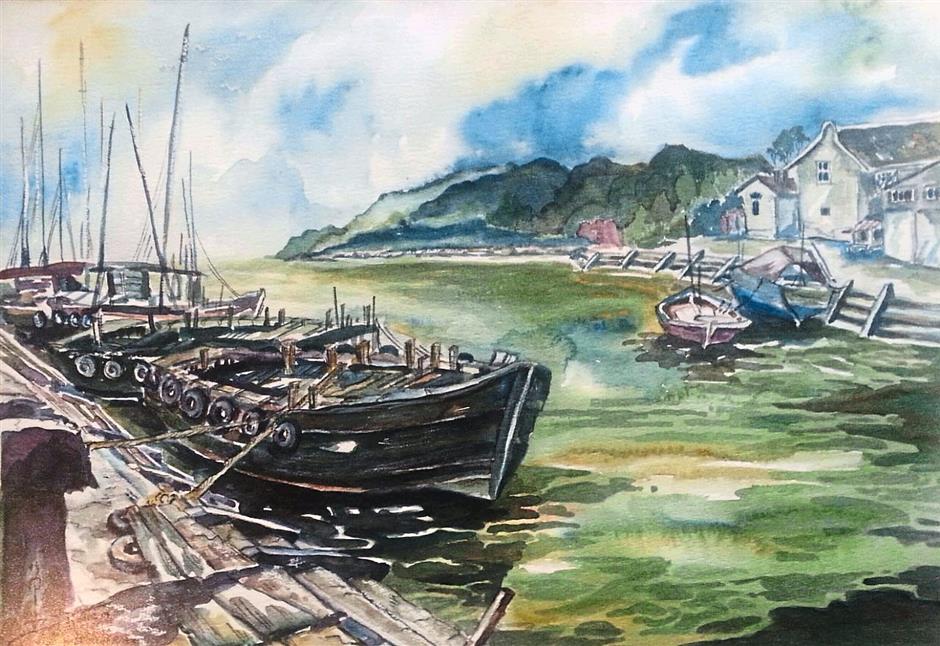 A New Beginning is a mixed media collage from Tianne’s Natural Heritage series.

Expect to see some pieces from her Ethnic Heritage series. Subjects will include some of the ethnic groups in her now-home of Sabah, as well as peculiarly Eurasian subject matter – families dancing to the Jingkli Nona in the Portuguese Settlement in Malacca and a rendition of the Matah Kantiga, a lively folk music tradition of Portuguese origin, in which a man and a woman improvise on verses in a rhythmic back-and-forth.

“Here in Sabah, there are many ethnic groups and because of cultural adaptation, some of the clothes and dances are undergoing changes, although efforts are being made to try and retain the original forms,” she says.

Paintings like her Bisaya Girl evoke the spirit of the Bisaya people, who live in the south-western part of the state and whose lives revolve heavily around the sago plant.

“They plant sago, use the palm leaves to thatch their roofs, and make the sticky pudding known as ambuyat out of sago pearls,” she says. 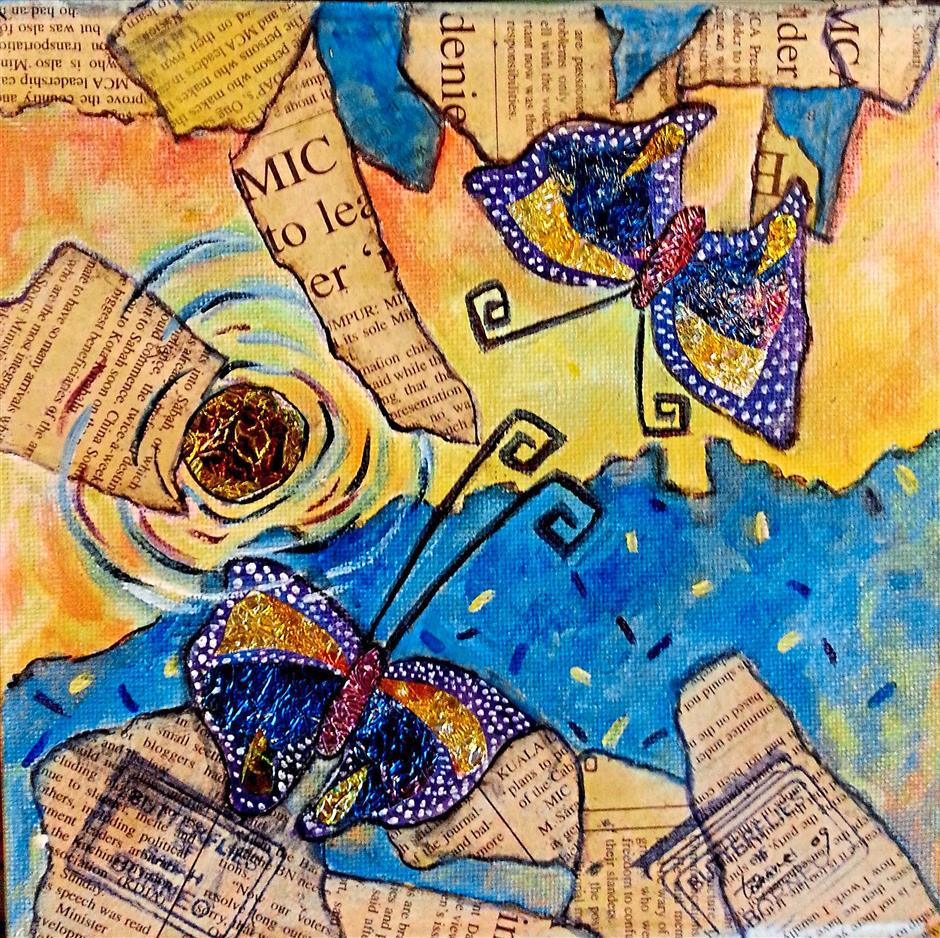 Visitors can also expect to see renditions of Tianne’s other passion – the beauty of nature – in her Natural Heritage series. Here, she seeks to crystallise a moment or feeling, and to communicate that moment via her work.

“To capture the uniqueness of nature is to freeze a moment in which one is completely at peace – yet in awe of God’s creations,” says the artist.

“It is the split second the sky bursts into vibrant colours, as the sun touches the horizon… it is the innocence of sparrows playing in puddles of water after the rain. That’s what I want to share in my paintings.”

Rather than just observing and reproducing such though, Tianne is now all about interpreting the moment. “When I first started painting, I would look at something in nature and paint what I saw. That’s how new artists learn, observing and trying to emulate. But as my career as an artist developed, I shifted from a visual approach to an expressive approach,” she says.

In her work, Tianne enjoys exploring a variety of styles and media. She moves easily from Chinese brush work – which marked her initial foray into the world of art, when she studied under former Mara lecturer Tang Tuck Kan – to delicate watercolours, vibrant acrylics and mixed media, incorporating fibres. 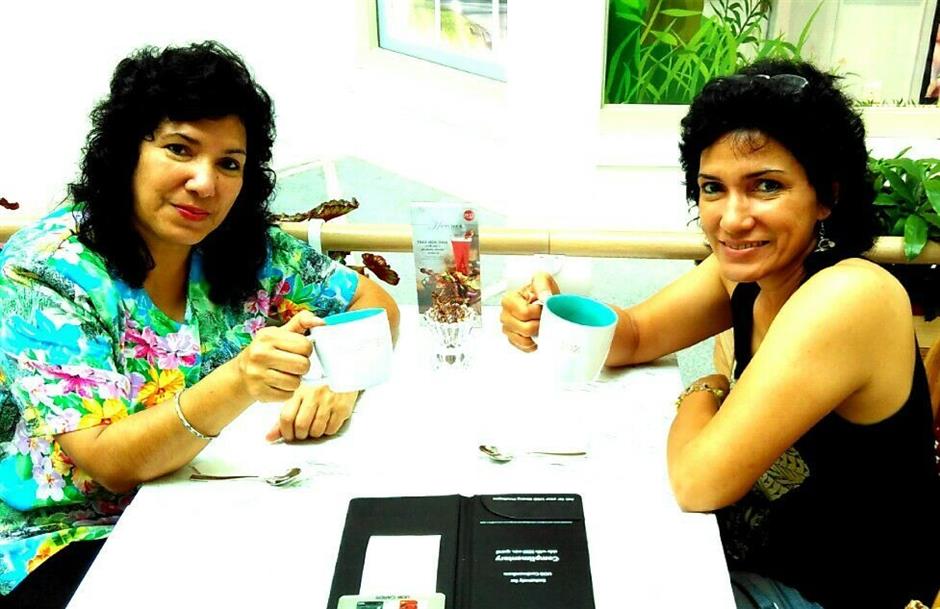 “Chinese brush painting is an art form which requires a lot of discipline and focus – you have to plan it, know what’s happening and what you’re doing and then the painting is executed right away, the energy immediately transferred from you to the paper,” she says.

When her husband travelled to Britain in the late 1980s to do his post-graduate degree, Tianne went with him and became immersed in the watercolour scene. When she returned to Sabah, it was time for her to move on to experiment with acrylics, the medium that was then gaining popularity.

“I like acrylics very much – strong colours, but they dry very fast so my artwork can tap into the spontaneity of Chinese brush painting – but you can dilute them till they are like watercolours. It’s a versatile medium, you can do a lot with it,” she says.

With a few pieces taken from each style phase, Art Mix will chart her evolution as an artist.

“Exhibitions are documentations of milestones, they track your changing styles,” she says. 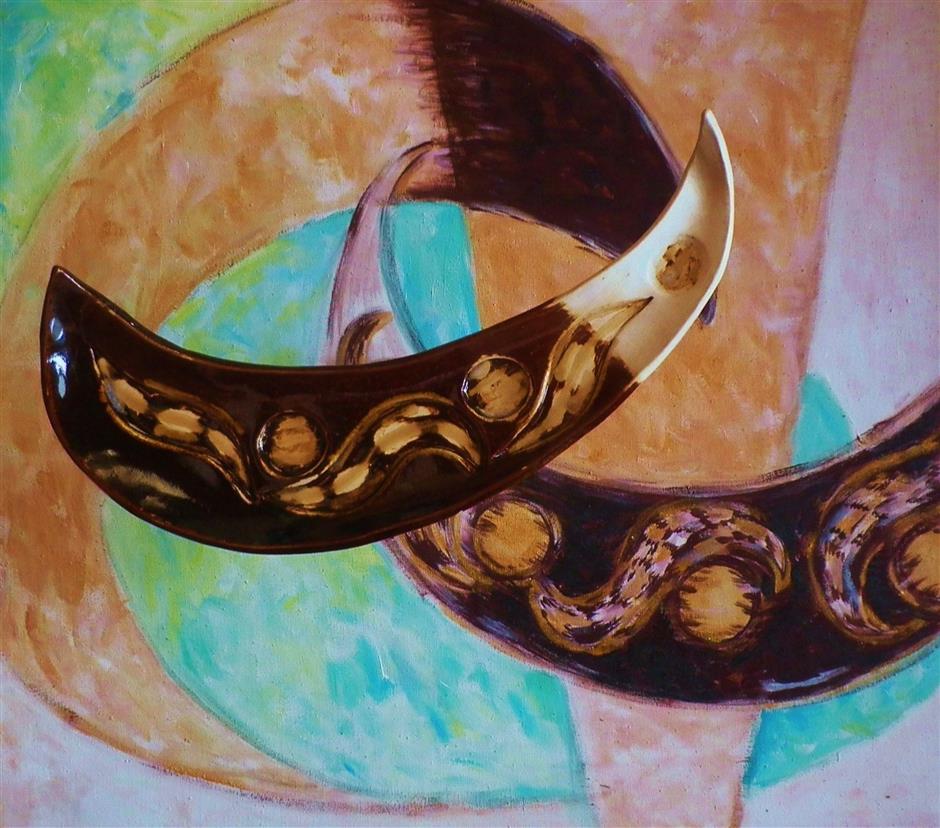 Three Crescent Moons is a collaborative artwork from Tianne and Lesley. It features an acrylic work on canvas from Tianne paired with a ceramic piece from Lesley and is evocative of life’s phases and the changes everyone needs to undergo on the journey.

“My first love is nature, so there is always an element of that in each painting. But I work across the spectrum, from the realistic to the very abstract,” she says, as can be seen from her more abstract Spirit From Within, Anne-droid and Marine Magic series.

Lesley started working with creative ceramics in 2006, and the sisters have worked on several collaborative pieces.

“Usually Lesley does the pottery first, and then I develop a painting to complement it. We had an exhibition in Tokyo, of this kind of paired work,” says Tianne. She will be exhibiting two sets of this collaborative work at Art Mix, as well as some individual pieces from Lesley.

“In the end, my works are about one thing, really – capturing the spirit of life, and sharing it with others,” says Tianne.