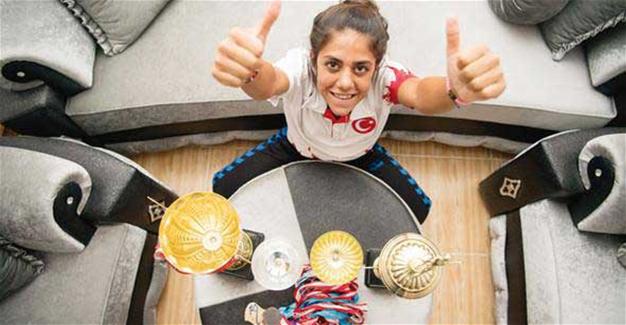 The Turkish Athletic Federation’s discovery of Meryem Bekmez’s remarkable skills in athletics at the age of 12 saved her from getting married at a young age.

“She would have been married off like her sister, or would be working on the field,” said her father Hacı Bekmez, had she not been “discovered” yet.

The 16-year-old’s life changed four years ago when the Turkish Athletic Federation’s coach Çetin Aslan came to her school in the southeastern province of Diyarbakır’s Şilbe village. Aslan had chosen the “golden athlete” candidates. Among them was Meryem Bekmez, who was a 7th grader in middle school at the time.

Bekmez ranked first in the three-kilometer running competition in an intra-school tournament held in the Diyarbakır province, then came in first in Turkey. In this same year, Bekmez was summoned to the national team camp and then won first place in the Balkan Championship in Greece. But, once her coach Aslan had seen that the youngster could very well “imitate” the race walk athletes, he changed her branch from “running” to “race walking,” a long-distance discipline within the sport of athletics.

After breaking Turkey’s record in 2015, she snatched the gold medal in the European Race Walking Cup in the five-kilometer race walking championship as well as in the junior 10-kilometer competition organized in Georgia. In the following year, she came in first in the 2016 European Athletics Championships in the Czech Republic.

This year, Bekmez snatched silver in the IAAF World Under-18 Championships held in Kenya from July 12-16. In the championship, she walked away as one of the world’s most successful athletes among others from 120 different countries. In the European Athletics U20 Championships 2017 held in Italy, she came in second in the junior category.

Bekmez, who stands as an example to other girls in Diyarbakır, says her next aim is to win a golden medal in the 2020 Tokyo Olympics race walk.

“Meryem will witness four Olympics throughout her sports life. The first is the 2020 Tokyo Olympics. She is working for the gold medal. She will be Turkey’s pride. The Federation has high hopes for Meryem with her discipline and character. She is the first female athlete of the southeastern region . Not only for Diyarbakır, but she stands as an example for all girls from the region. For example, of the 150 children I am currently coaching, some 110 are girls,” Meryem Bekmez’s coach Aslan says.

Athletics have changed Bekmez’s life because it enabled her to continue her education and continue on to her high school studies. She is currently a sophomore in Diyarbakır’s Kayapınar Trade Vocational High School.

The young athlete receives a salary of 1,000 Turkish liras (around $282) from the Federation per month.

And for Bekmez to keep herself in good condition, the Kayapınar municipality’s trustee mayor Mustafa Kılınç has placed her unemployed father Hacı Bekmez on payroll employment in the municipality.

Meryem says she had previously never even seen the Diyarbakır city center, but can now travel the world thanks to the championship competitions.