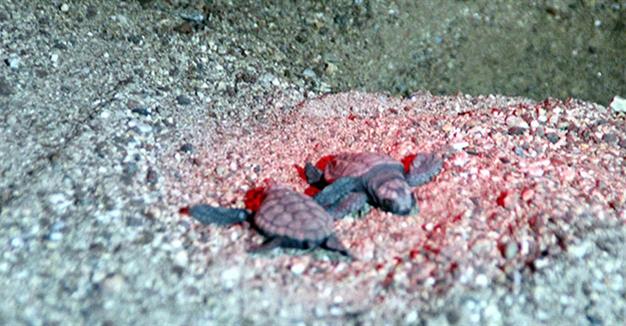 Loggerhead sea turtles (caretta caretta) that hatched from their nests in the western province of Muğla’s Marmaris district have finally reached the sea in their species’ annual migration, under the inspection of Pamukkale University Biology Department member Associate Professor Eyüp Başkale.

For the last seven days, the Marmaris City Council Environmental Group had been observing eggs left by a sea turtle 50 days ago on the İçmeler Beach.

All eggs in the nest have been handled and the last two caretta caretta turtles were directed to the sea by a flashing light.

Başkale said they had been observing the nests since July 2 and following them during night watches until the incubation period ended.

“After the first baby hatched, we waited for more five or six days until the last two babies. Now we will wait for them to become mature and lay new eggs,” he said.

Başkale added that the sea turtles were the “real owners” of the sea, which is merely occupied by people.

“Beaches are their place to reproduce. We are occupying their spaces. Today we sent the babies to the sea, and this is a very good event for the İçmeler Beach. It was a surprise for us that the turtle chose this place to lay eggs. It is not an ordinary situation,” he said.