By Nourhan Tewfik for english.ahram.org 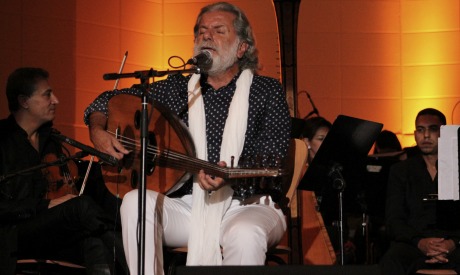 Marcel Khalife performs at the Bibliotheca Alexandrina on 29 July 2016. (Photo: Ati Metwaly)
“Stripped of my name and identity?

On soil I nourished with my own hands

Don't make an example of me again

Don't ask the trees for their name

Don't ask the valleys who their mother i

From my forehead bursts the sward of lightAnd from my hand springs the water of the river,”

Over the past decades, the aforementioned lines have come to be associated with one of the Arab world’s most celebrated duos, that of Lebanese oud virtuoso, composer and singer Marcel Khalife and late Palestinian poet Mahmoud Darwish.

Written by Darwish and set to music by Khalife, Jawaz Al-Safar (Passport) documents a Palestinian's reaction to Israeli authorities as they try to confiscate his passport and bar him from entering his own homeland. But alas, for Darwish Palestinian identity is not defined by official documents, for both the land and its poet are inseparable.

Khalife’s oud communicates this bleak moment, while Rami’s piano augments this poignancy and suggests an element of raw anger.

The piano melodies are abrupt, with sudden, dramatic shifts, and are at some point joined by the oud, both sounds clashing with one another and suggesting a piercing confrontation perhaps between the poet and the occupier of his land.

As the oud-piano scuffle eventually subsides, Khalife sings the concluding line, “All the hearts of the people are my identity / So take away my passport!”

The concert marked the opening of the 14th edition of Bibliotheca Alexandrina International Summer Festival, an annual six-week long festival organised by the Bibliotheca Alexandrina Arts Centre, and which this year will bring over 40 cultural events — ranging from music and theatre to film and traditional dance — to the Mediterranean city.

In Friday’s concert, the virtuoso played some of his own compositions and songs, as well as selections from the Arabic music repertoire, with the BA orchestra’s rich and well balanced sound adding to the over all magnificence of the night. Khalife also performed some songs fully solo throughout the course of the evening.

Khalife opened the concert with his instrumental composition Sabah Al-Layl (Salute), following it by Rakwat Arab (Arabic Coffeepot), whose lyrics were written as a poem by celebrated Lebanese poet Talal Haidar and which Khalife then set to music.

This marked Khalife’s first concert in Cairo since he brought his avant-garde Trio Khalife project — a family collaboration of Marcel and his two sons Rami and Bachar — to Cairo’s Al-Azhar Park in October 2014. 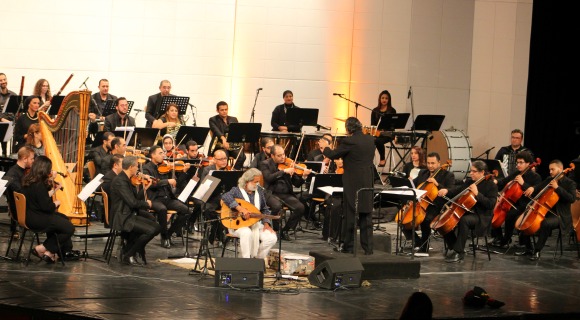 Marcel Khalife performs with the Bibliotheca Alexandrina Orchestra under the baton of maestro Hisham Gabr. Bibliotheca Alexandrina, 29 July 2016. (Photo: Ati Metwaly)
As Ati Metwaly wrote in a 2014 article for Ahram Online, “The trio moved from acoustic to traditional to electronic music and back again, creating an artistic exchange between Marcel Khalife’s musical legacy and his sons’ contemporary approach to the same material.”

Addressing the audience on Friday's concert, Khalife expressed his “profound happiness for being in Alexandria which is very dear to my heart, for it’s the hometown of Sayed Darwish, the iconic artist from whom we’ve learnt a lot.”

“Earlier today, we visited Darwish’s Alexandria home, and I was devastated to see that it was abandoned and left to decay,” Khalife stated before proceeding to pay tribute to “Fanan Al-Shaab” (The People’s Artist) by revisiting one of his chef d’oeuvres, Telaat Ya Mahla Nourha (The Sun has Come Out).

The much-anticipated part of the night arrived when Khalife delivered his rendition of Ya Naseem Al Reeh (Oh, Breeze of the Wind), a poem by 9th century Persian poet and Sufi mystic Husayn ibn Mansur Al-Hallaj that was adapted into many musical pieces by different musicians, and whose opening lines proclaim, “Oh, breeze of the wind, tell the fledgling / That drinking has left me thirstier / I have a loved one whose love filled my viscera / My cheek is his to walk on if he pleases / His soul is mine, my soul his, so / If he wills I will and if I will he wills.”

Khalife also performed his instrumental composition Tango La Oyoun Habibti (Tango for my Lover’s Eyes), which he dedicated to “my beloved and all of the audience’s lovers too.”

The concert also featured a performance of Rami Khalife’s composition Requiem for Beirut, at which point Marcel left the stage to the orchestra, maestro Gabr and pianist Rami to deliver this musical work of art to "the city that would not die," a nickname this beauteous city has deservedly earned over the years.

Besides performing Passport, with lyrics by poet Darwish as mentioned, Khalife also revisited some of his other collaborations with the late Palestinian poet, including Rita and Salam Aalayki (Peace Be With You). 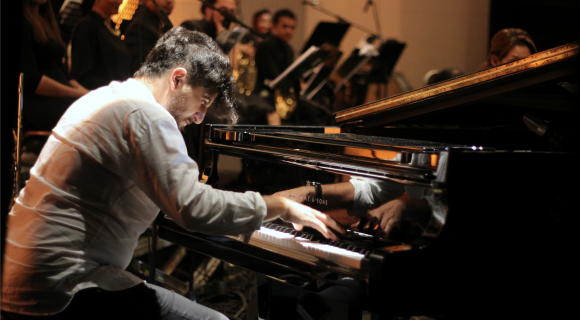 Rami Khalife accompanies Marcel Khalife on piano. Bibliotheca Alexandrina, 29 July 2016. (Photo: Ati Metwaly)
Set to music by Khalife, Peace Be With You ends with a stanza from Darwish's popular classic Ummi (To My Mother), which was originally written by the poet within the confines of an Israeli prison over four decades ago “as a way to reconcile with his mother and is addressed to her in the form of a letter,” according to the Palestine Advocacy Project website.

The lines from My Mother proclaim, “Dearly I yearn for my mother's bread / My mother's coffee / Mother's brushing touch / Childhood is raised in me / Day upon day in me / And I so cherish life / Because if I died/ My mother's tears would shame me.”

Darwish thus speaks of his yearning for his mother, her bread, coffee and touch, with a blurry line between the mother and his country upheld throughout the poem, a symbolism so powerful that the song now acts as a metaphor for Palestine.

Closing the night, Khalife delivered Ya Bahareyya (Oh Sailor Men), which has come to be associated with the Palestinian people’s steadfastness in the face of the Israeli occupation, at which point members of the audience held up the Palestinian flag and sang along.

And why not? For at the heart of Khalife’s repertoire lies an unbridled transcendence of borders, and a staunch celebration of the collective identity of the Arab world.

This is perhaps why, before closing the concert, Khalife said that “Alexandria and Beirut are just a short walk away from each other. Had there been no borders, we would have strolled to Beirut tonight. But what shall we do? This is our fate.”

Alas, Khalife had already taken us on a two-hour music voyage across the Arab world, one that took off from Alexandria and found its way to Al-Sham (The Levant), passing by Khalife’s own hometown, the Lebanese coastal town of Amchit, yet refusing to settle there.

Perhaps, as Khalife himself pointed out in several interviews and as Ati Metwaly asserts in a 2014 interview with Khalife, there exists some relationship between Amchit’s vast sea and the boundlessness of Khalife’s music. 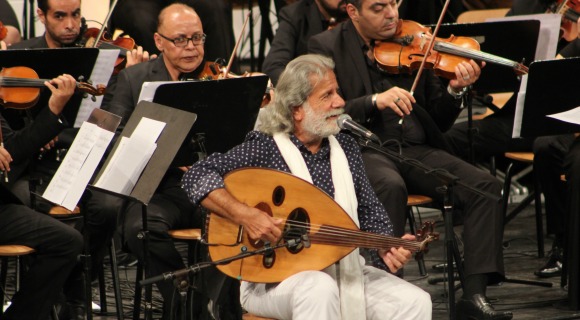