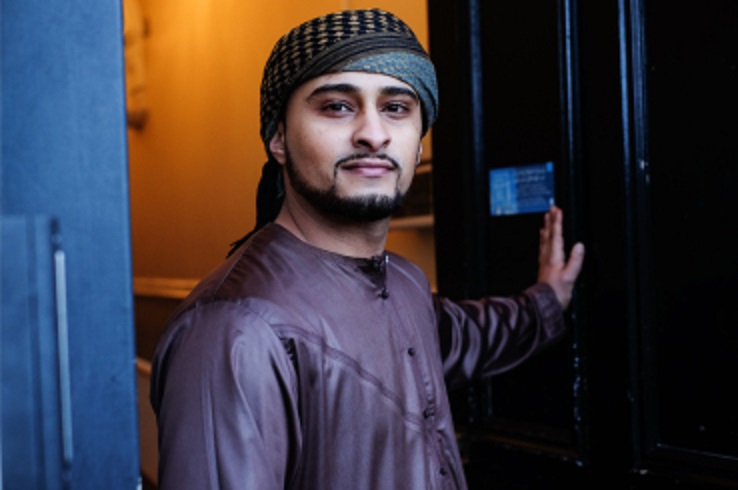 A new photography essay by Shyamantha Asokan explores Britain’s new generation of imams – young Muslims who are breaking with traditions, setting up gender-equal mosques, counselling their congregations on how to deal with Islamophobia, preaching via YouTube, and more.

Shyamantha Asokan, the photographer and writer behind the series, has spent 18 months travelling across the country to photograph and interview imams in their 20s and 30s. The final series features 13 imams in eight different cities. Each imam’s portrait is accompanied by a mini-interview. The series launches on 1 November with an exhibition in London.

These imams are a window into fast-evolving and much-debated ideas around British Muslim identity – many of the imams disagree with how the media portrays young Muslims, and this series aims to give them a voice. The series includes female imams, converts, and imams who are setting up their own prayer spaces, as well as imams at established mosques who hail from families containing generations of imams.

On why Shymantha chose to pursue this project she says:

“I love using photography to tell the stories of people from minority communities, those who usually fall outside mainstream media coverage. Back in 2016, I met a dynamic imams in London who were in their twenties – I started thinking about how this set of young British Muslims was doing exciting and innovative things, and yet very few people seemed to be talking about them and hearing their stories. I was also struck by how the imam’s role, which many people think of as very traditional, was in fact changing rapidly. And so I started travelling across the country to photograph and interview imams in their 20s and 30s. It took 18 months for the series to come together, and a lot of that time was spent gaining people’s trust.

“The imams I met were a window into many of the issues facing British Muslims today – they talked to me about helping their congregations cope with Islamophobia, creating gender-equal mosques, challenging what their elders expect of them, and of course using social media. Many were second-generation migrants who’ve now reached adulthood and are taking over their community’s leadership roles from the older generation. They were also a highly diverse group with diverse views, including imams who were more traditional. I really hope people of all faiths will learn something from this series. I’m hugely grateful to every imam who’s taken part.”

“I was born in Yemen but me and my mum came here when I was three, to join my dad. He worked in the local cornershop. I’ve spent all my life in Liverpool and I’m part of Liverpool, part of this community.

When you’re based in your community, you’re able to find the people who need you. Some of the people in this area are asylum seekers from countries like Eritrea and Sudan. When they come to the mosque, they find comfort – people gather and you feel like a family. All the children here come and talk to me. When the imam is young, they can relate.

When I’m with my friends, we play football, go for a meal, go for a walk – the same things as everyone else. I’ve got non-Muslim friends too, who I’ve grown up with, lived on the same street. They laugh about what the media says about Muslims.

I didn’t plan to be an imam. After university I was planning to go to Dubai to work as a sports coach, but things changed as soon as I walked into this mosque. I was never sure about moving abroad, to be honest. Because you’ve built up everything here – it’s your community and your home.”