By Adrian Goldberg for BBC

British gay Muslims are joining the global fight for equality and seeking gay Islamic marriage. The BBC's 5 live Investigates speaks to one couple about their 'nikah' - a Muslim matrimonial contract - and asks how they balance their sexuality with the Islamic faith.

"We met about three years ago, at an iftar - a breaking of fast during Ramadan.

"I think a lot of Muslims find that time of year very spiritual and very enlightening, and so I think that's why our relationship developed, because we spoke about our faith."

"Eventually we went on a date."

Asra recalls the first time she met her partner, Sarah, three years ago. The gay couple, who are also Muslim, are one of a growing number of gay, British Muslims who have cemented their relationship with marriage - Islamic marriage.

Asra fondly remembers the moment Sarah proposed to her.

"After the first date, which was about an hour, Sarah casually asked me to marry her."

"I think it was more like four hours, after dinner, coffee and walking. I didn't really plan it, but it just really seemed like the way it was between us, I should try and keep it as pure as possible.

"That may sound strange being lesbians, but it felt like we should do it the most honourable way we could."

Asra and Sarah decided upon a 'nikah' - a Muslim matrimonial contract. Whilst nikahs have traditionally been the reserve of heterosexual Muslims, Asra and Sarah were aware that other gay Muslims had followed this route and the couple decided to investigate further.

It's still very difficult for me to tell my family about my life being a lesbian. They know I am a believer, they know I am religious, but going as far as saying I am a lesbian is quite hard Asra, gay Muslim

"A few friends said you don't really have to have an official Imam, but you need someone who is knowledgeable enough about the Qur'an to do it. Fortunately, one of our friends was, and she offered to do it. She's a lesbian herself, and she said we could do it in her home."

"I wanted to wear leather, but Asra wouldn't let me," she sighs.

"We got rings from Camden market, and we drew up contracts - we got a blueprint off the internet of a heterosexual contract and we both looked at it separately, to see if there were things we wanted to change."

"I remember I put about the dog - that if we broke up, Asra wouldn't steal the dog."

Asra rolls her eyes and adds "we also did a dowry, of £5. It was a symbolic thing and we've still got those £5 notes."

In attendance were six friends, who also acted as witnesses - "and a cat," says Sarah.

The short ceremony was conducted in Arabic, and additional duas - prayers - were read and the marriage was essentially no different from the nikahs performed for straight Muslim couples all over the world.

But the Islamic faith vehemently rejects homosexuality, and the fact this nikah was for a gay couple is highly offensive to the majority of Muslims - including Asra's own parents. 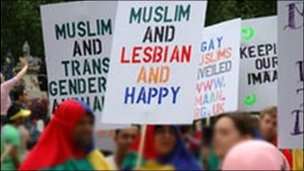 There is growing visibility of gay Muslims in Britain, although not all are confident about coming out

"It's still very difficult for me to tell my family about my life being a lesbian. They know I am a believer, they know I am religious, but going as far as saying I am a lesbian is quite hard," Asra says.

"I remember thinking this is the only time I am going to get married, and my family weren't there.

"That was constantly going through my mind - I am having an Islamic nikah, doing as much as I can through my faith, but my family weren't there."

However, Sarah's relationship with her family is quite different.

"Because I wasn't born a Muslim - I converted five years ago - I think my family is quite accepting of my sexuality. But sometimes it seems like they are waiting for me to grow out of being a Muslim."

Sarah and Asra know their marriage is unorthodox, and the idea of a gay nikah would be rejected by the majority of Muslim scholars, but Sarah says it is nobody's business.

By not allowing same-sex couples to wed, there is a direct attack on the Qur'an's message that each person has a mate who is their 'comfort and their cloak' Imam Daayiee Abdullah

"It is between me and God, and when we got married it was not ideal, but we were doing our best."

However, there is a small but growing voice within the Muslim community representing gay people, with the emergence of British gay Muslim support groups such as Imaan and Safra Project.

One of the key advocates of Muslim gay marriage is the American Imam, Daayiee Abdullah - who himself is gay. He has performed a number of gay nikahs in America and has also advised gay British Muslim couples on how to perform the ceremony.

He reasons that to deny gay Muslim couples the right to a religious union, goes against teachings in the Koran.

Speaking to 5 live Investigates, he says: "Since Islamic legal precedence does not allow same sexes to wed, Muslim societies make it a legal impossibility within Islam by not allowing same-sex couples to wed, there is a direct attack on the Koran's message that each person has a mate who is their 'comfort and their cloak'."

It is not just within the Muslim community that gay Muslim couples such as Sarah and Asra have encountered hostility.

"I feel there's Islamaphobia within the gay community. It's something that really worries me," says Sarah.

"There was an occasion at gay pride once where one of the marchers turned around and quite crudely said 'we didn't know pride was allowing suicide bombers on the march' - it was really shocking to hear it from a fellow gay marcher."

But according to Sarah, it's not just Muslims who are rejected by the gay community.

"I think there's a deep-rooted assumption in the secular queer community that you can't be gay and believe in anything, apart from yourself or materialism."

However, gay unions are being integrated into wider British society even more - and the government recently announced plans to allow churches in England and Wales to host civil partnership ceremonies.

Ministers have pledged greater equality for lesbian, gay, bisexual and transgender people, but said no religious group would be forced to host the ceremonies.

The Church of England has said it will not do so. Quakers have welcomed the plans, with support also expected from Unitarians and Liberal Jews. But what about the Muslim community?

"Homosexuality is not considered a halal way of living at the moment, so of course there's going to be an extreme reaction to a gay nikah. So, as a community we have to get tolerance before we can even attempt acceptance of marriage," says Asra.

But she is hopeful for the future.

"Same-sex nikahs are still a contentious issue, but all I can say is I have done it, and I am completely comfortable and content with my faith and hopefully people will think 'well, let me try and get to that place'.