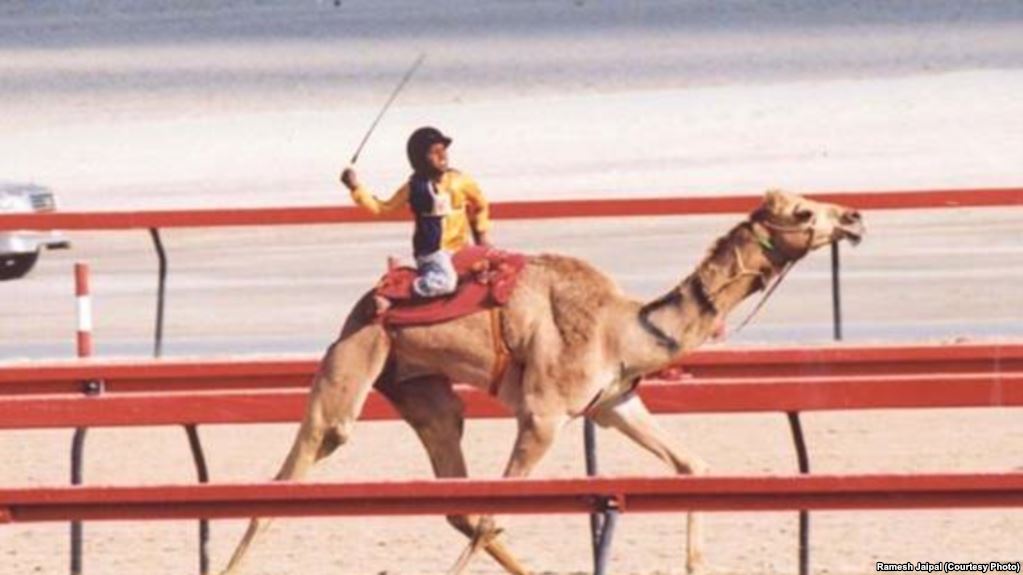 Desperate to feed their family, Ramesh Jaipal's parents sold him to a business in Dubai to help train and scrub camels for 10,000 Pakistani rupees a month.

"I deserved love, I deserved education and I deserved a family, but I was scrubbing camels and racing them in the scorching temperatures of 106 degrees (Fahrenheit/41 degrees Celsius)," Jaipal told VOA.

Because the United Nations was retrieving boys and girls like Jaipal from servitude and returning them home, he was able to go to school, but only up to the eighth grade.

Jaipal was also a rickshaw driver, a motor mechanic's assistant, a newspaper vendor, a shoe polisher and a car washer until he worked his way up the education ladder, receiving master's degrees in political science and sociology from Shah Abdul Latif University in Khairpur, Pakistan.

This year, Jaipal, 34, completed the most recent leg on his worldwide journey: as a fellow in the prestigious Hubert Humphrey Fellowship program to study law and human rights at American University's College of Law.

"I can never forget that I was once a camel jockey. … Today, I know for a fact that I am the only one among the thousands who would race for their lives like me, to make it to this point. Studying in America is a privilege, and only I have it among all of my fellow jockeys. It is an honor and it surely is a dream that is fulfilled."

The fellowship, administered by the U.S. Department of State, provides a $1,500 to $1,700 monthly stipend for study and living expenses.

"My family was dirt poor. I was the only son of my parents at the time, and I was hired on a salary of 10,000 Pakistani rupees [$200] a month," he recalled. "What more could my father ask for? He had to feed a family of four at the time."

Jaipal and his family are Dalit Hindus who lived in one of the poorest districts of Pakistan's predominately Muslim Punjab province, he told VOA in an interview at his apartment in Silver Spring, Maryland. For decades, southern Punjab has been a target for child trafficking.

According to reports, more than 3,000 children as young as 3 years old from Pakistan, Bangladesh, Sri Lanka and Sudan were smuggled to United Arab Emirates to serve as jockeys for the popular camel-racing sport in the oil-rich Gulf states. UNICEF and other nongovernmental organizations have returned many of these children to their families.

Jaipal says young children like himself were underfed and inadequately clothed, lacked strength and energy, and faced substantial health risks. That made them perfect for the job.

"I was fit for the job because I was physically unfit," he explained. "I was weak, and I was underweight, and I could make a camel run very fast. The sheikhs, who would train us, would not know Urdu, but they did know how to say 'maaro' or 'hit the camel' in my [native Urdu]. They would hit me to teach me so that I could hit the camel to make it run even faster."

When he was 8, he was forced to race an untrained camel in the desert. He suffered a head injury when the camel tried unsuccessfully to throw him off his back — an injury he still suffers from today. Despite his head trauma, Jaipal was forced to work a few more years. In 1995, when he was 11 years old, he was rescued by UNICEF and other child advocates.

Returned to parents who sold them

"Call it extreme poverty, lack of education or blame it on the system, but the truth is that most of the children who would go for this sport to UAE were actually sent there because the parents would sell them," said Sarim Burney, chairman of a trust that battles human trafficking in Pakistan. "And we would hand over these children to such parents upon their return."

No children are trafficked or smuggled from Pakistan to UAE for camel racing anymore, Burney says. But he remains concerned that several of the recovered children remain missing.

"I wish we could put a check on how these children were later treated by their parents," Burney said.

Jaipal says part of his life's mission will be to fight against child abuse in Pakistan today.