By Kim Barker for lens.blogs.nytimes.com

Once in Kabul, the photographer Paula Bronstein and I went to visit a mother and her two children as they smoked heroin in the tiny storage room where they lived. Their fingers black with tar, Zaher, 14, and Gulpari, 12, inhaled the drug out of a canoe-shaped piece of foil heated from below, a skill learned from their mother.

It was a bleak scene: Gulpari curled up against her mother, slumped against cushions on the wall. Zaher rubbed his stomach, muttering, “God, God.” The room was so cloudy with smoke that we couldn’t help but get slightly high. We left feeling hollowed out and shaken. What could the future of those children be? 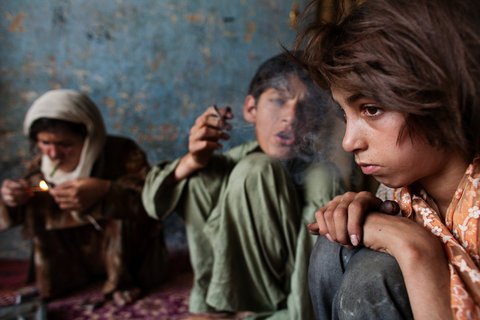 Zaher smoking heroin alongside his heroin-addicted mother, Sabera, and his sister, Gulpari, in their home. 2007.Credit Paula Bronstein/Getty Images

I was there to write the story for my employer at the time, The Chicago Tribune. Paula was there to shoot it. (I am supposed to call her “Ms. Bronstein,” for this is The New York Times, but she is a friend, and anyone who knows the force of nature that goes by Paula Bronstein would find such an honorific absurd.) After the article ran, I went on to the next story — Afghanistan is like that. But I later found out that Paula had gone back to the family and tried to make sure they got into rehab. She took them food. She checked in on Zaher, especially, the boy who was already far gone by the time we met him, as he turnstiled his way through numerous stints in rehab.

“You can’t just walk away,” Paula told me last month. “If you document something, you have a responsibility to help. As journalists, we can’t hand people money. But when I was photographing the heroin addicts, I would bring them fruit. I’d think, at least they can’t sell this. They can’t buy drugs. It’s something they can eat. I think it makes sense. At least in my world it does.”

Much as she did with Zaher, Paula has held onto Afghanistan ever since she first went there in December 2001. She kept going back, focusing primarily on photographing stories away from the war’s front lines. She showed how average Afghans coped with war, and how Afghan women confronted a variety of ills, how some teenage girls would rather set themselves on fire than be forced to marry old men, how women widowed by war coped.

This month, her book, “Afghanistan: Between Hope and Fear,” was published by University of Texas Press. It is a collection of photographs that whiplash from beautiful to horrific, a visual compendium of what has happened on the ground during America’s longest war. Although I am certainly biased, the book is a must-see for anyone with any interest in Afghanistan, the plight of women internationally or photography. And it includes an essay about Afghan women by the award-winning British journalist Christina Lamb (same friend disclaimer) and a foreword by me. (After Paula cheerfully pestered me about it for years, because she never gives up.)

The book is divided into three basic sections: “The Situation” (the euphemism everyone in Afghanistan seems to use to describe the state of the war), “The Casualties” and “The Reality.”

In “The Situation,” Paula chronicles the training of the Afghan Army, Afghan Army casualties, the aftermath of suicide bombs, women voting and the country’s leading politicians like former President Hamid Karzai. As always, there are surprises in Paula’s images — the unexpected splashes of color, like the purple gloves on the NATO medic who is staring intently at something on the beige ground. (And yes, that’s the severed leg of a suicide bomber.)

Looking through the photographs in “The Casualties” section is not easy. It is a grim, throat-choking march of doom that starts with a 7-year-old boy nearly killed in crossfire between United States troops and enemy forces and then moves through women injured by the tools of war and by their own hands and then children abandoned in a mental institution and a starving boy and his grief-stricken mother and then more grieving mothers. It is as relentless as Paula. It hurts to see children and women as throwaways, and that’s part of the point. To make people who have never been in a war zone look at Afghans as human beings, not statistics in some United Nations report, and to try to imagine what it would be like if such things happened in the West.

“The middle of the book is difficult to look at, no question about it,” said Paula, who grew up in a suburb of Boston and is now based in Thailand. “It has to be hard because it’s still hard today. It’s very current and very topical. It’s important to show this. This is reality. This is reality.”

The last section of the book is actually called “The Reality,” and it is, I guess, where the “hope” part of the book’s title resides. Here, there are photographs of Afghans getting ready for a wedding, or women in bright blue burqas walking in front of a bombed-out palace, their reflections in a pool of water. Girls raise their hands in school.

But this part of the book also includes the country’s heroin epidemic. (Paula is incapable of sugarcoating the reality in Afghanistan.) Zaher and Gulpari smoke with their mother on Page 152; men shoot up the drug inside the abandoned Russian Cultural Center, the building that became home to hundreds of drug addicts.

One of the last images of the book is one I choose to hold on to. It shows an old man in a turban and a white beard laughing, standing in front of a hill in Kabul called “TV Mountain” because of all the television broadcast towers on top. It is beautiful, peaceful and joyous, and it makes me miss the Afghanistan that I once knew, when there was hope and defiance and, yes, laughter.

It is not that way now, or so I’m told. Paula last returned to Afghanistan in the spring, as the country struggled with what felt like ever-worsening security and the world seemed increasingly inclined to turn away. She obviously can no longer travel on the road we once traveled between Kabul and Kandahar. She can no longer travel by road to pretty much anywhere. There are stories she wants to do that she cannot. She could not follow the war widows of the battered Taliban stronghold Helmand Province to their homes to take photographs. She and a reporter opted not to drive to Kunduz Province to do a follow-up story on the Doctors Without Borders hospital mistakenly bombed by the Americans last year.

We spoke the week after the Islamic State claimed responsibility for its first major suicide bombing in Kabul, an attack that killed at least 80 people at a peaceful demonstration. ISIS attacking inside Kabul instead of the Taliban? It seemed to be just another sign that the situation in the country was sliding from bad to worse.

“That’s the Afghanistan of today,” she said. “Things are not going well. The bombing that just happened, it’s just a bad sign of things to come. The world does want to forget about Afghanistan, but I don’t think they’re going to be able to anytime soon.”