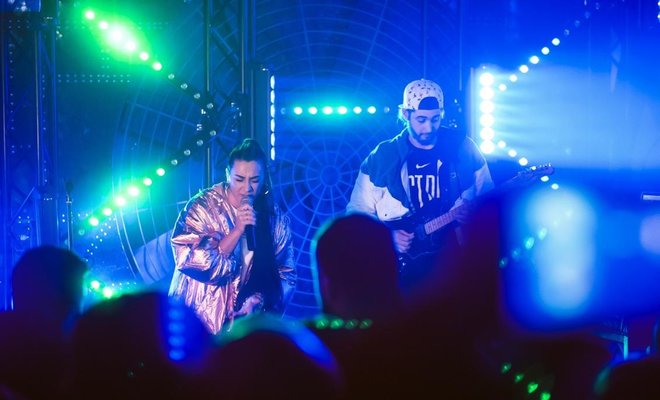 DUBAI: From London to New York and every city in between, music hubs ebb and flow with changing genres, rising stars and falls from grace, but the UAE has never been so alive with melody and rhythm.
Right now is arguably the best time to be a musician in Dubai or Abu Dhabi, with a range of open mic nights and concert promoters shifting the sands of opportunity and creating platforms for artists to draw a crowd.
Over the past five years, a series of musical visionaries have chiseled out a proverbial platform for melody makers to perform across Dubai and Abu Dhabi — in and out of hotels, in parks restaurants, coffee shops, private homes and really anywhere a crowd can gather.
Comprising the recent audio wave of locally-based talent, Freshly Ground Sounds arrived on the scene in 2013 with a seasonal flurry of home-grown gigs in quirky locations: Dubai Garden Center, Safa Park and Al Serkal Avenue to name a few. Now in its fifth season, the community-focused initiative is a fully-licensed enterprise, continuing with pop-up gigs and special al fresco productions throughout the winter season.
Dubai-based performer Abbo has simultaneously set up regular open mic nights in various venues across town under his GoPlayTheWorld outfit. Then, more recently, The Sound Gaarden has established itself as a “discovery and hiring platform” for artists in the UAE, helping musicians get hooked up to venues and help make connections happen.
And, as the saying goes, if you build it they will come. With more opportunities to perform, a glut of talent has emerged from the maple woodwork to regularly showcase their original tracks, sometimes honing their skills on the stage from complete debutant status, in warm and welcoming open mic events across the country.

We speak in colors

Somewhere among the haggard fishing dhows, tourist trinkets and the gold flakes on your foamy latte, Abu Dhabi is harboring a post-rock poet who cuts through the capital’s multi-layered identity like a sonic scalpel. His self-professed neurosis fuels a litany of fragile verses that smack of the strongest elements of “Bright Eyes,” “Death Cab for Cutie” and American singer-songwriter Sufjan Stevens’ back catalogue. If Bob Dylan was tuned to a frequency that led him to recite social commentary, we speak in colors’ Andrew Armstrong is somehow primed to paint a collage of words and musical arrangements that are more focused on his introspective melancholia, riddled with familiar yet provoking sentiments that complement his bright, uplifting cadence.

Soulful acoustic hooks meet hypnotic electronic loops, Aman Sheriff is a solo artist who creates a soundscape that feels like it belongs to a whole ensemble of artisans. You could close your eyes and picture the full band but you would miss the physical presence he brings to each performance. Understated, but undeniable, he has been singing and songwriting since the formative age of 14 and performing with bands on summer travels in Goa and Thailand before dispatching his own project. He did all of this alongside recent ventures to Los Angeles and regular shows in his home town of Dubai. With misty vocal prowess backed by anthemic production, his “Piece of my Mind” EP is an instant classic.

The evolution of Shébani’s sound has been swift, but utterly comprehensive. Transitioning from university shows in Dubai and an acoustic cover gig debut with her sister, Iman, Sarah Al-Sheybani jetted to London to hone a distinctive sound of earnest, thoughtful vocals over pulsing beats and layers of wavy synth. The solo female artist currently performs with producer and musician Rayan Bailouni for an immersive music experience. It has been a year since “Alter Ego” (EP) standout “Ocean on Fire” premiered but the timeless production will resonate indefinitely. More recently, the down-to-earth video montage of “Right by You” dropped on Shébani’s YouTube channel. It is not to be missed.

Sometimes the greatest bonds are made at university and, in this case, it was a profoundly-fruitful musical connection. Zubin, Ankhurr, Darren and Sandeep also perfected their live performance chops in the early years of Dubai’s Freshly Ground Sounds events. Despite taking a break from live performances, the melodic, progressive quartet released another long-awaited EP earlier this year, notching two records on iTunes, brimming with syncopated riffs, hypnotic grooves and crispy, understated vocals straight out of a dream sequence. Fans have compared them to indie bands Foals and Neon Indian, but Physical Graffiti have taken a conventional four-piece band and reformatted it to refine their own palette of textured tones.

With the simple synergy of voice, hands and guitar, there is a purity attached to Norman Bataille’s songwriting. The Cuban artist is often likened to the vocal prowess of Michael Bublé with the intricate guitar style of John Mayer, but retains complete authenticity, refining his perky riffs at his home studio in Dubai. That is, when he is not jetting in and out of the city with his day job. A staple of homegrown open mic nights, Bataille most often blends modern bossa nova-esque folk with his own Hispanic flair.

A singer, songwriter and six-string strummer, Boye’s musical journey did not start so early. “I knew I had music in me,” he told Arab News, but the multi-instrumentalist took some time to find his groove. Shifting from poetry, the Dubai resident ventured into a little-known genre called “Hip-Up” after penning R&B tracks throughout college, with clear influences from the likes of R. Kelly, Joe, Keith Sweat and Tevin Campbell. Without a huge personal footprint on the Internet, Boye’s main digital presence is for his ensemble project, The Stoik Band. The artist is a frequent gigger on the local scene, affiliated with the aforementioned Freshly Ground Sounds and GoPlayTheWorld.