Five years ago, Indian teenager Soni Khatoon dropped out of school because she wanted to study in an English-immersion school, like her brother did, but she wasn't allowed.

These days, the 15-year-old is back in the classroom studying in English. But after school, she hits the streets, knocking on doors in a Kolkata slum called "EJC Basti" to speak with other children who've withdrawn from school.

Khatoon is a member of a group of 15 kids, mostly former school dropouts, who fan out across the city's slums to free children like themselves from the constraints of child labor and child marriages — by trying to get them back in school. They call themselves Shaktimaan.

"We figure out the reason for the children to drop out, whether it's due to family problems or a financial issue," says Khatoon, who aspires to be a doctor. "We carry out meetings among ourselves to find a solution. We then visit their parents and talk it out."

In Kolkata and the surrounding eastern Indian state of West Bengal, hundreds of thousands of children between the ages of 5 and 14 are out of school because they work illegally, according to India's Ministry of Labor and Employment. They're victims of extreme poverty, forced to work to help their families, or orphans who must support themselves.

Thousands more, particularly girls, are married off before they reach the age of consent, either out of custom or due to financial constraints. It's a common practice because parents often see their children's marriages as a benefit to themselves, either because of wedding dowries or because a married child is one less mouth to feed.

Shaktimaan is just one part of a larger, informal movement of 183 children operating in the city's slums who are fighting those practices. In the past few years, the movement has convinced some 2,300 kids to go back to school and freed another 1,200 from illegal factory jobs, according to Save The Children, an international nongovernmental organization.

"Shaktimaan group is one of the vibrant children's groups in Kolkata actively engaged in fighting the violation of rights of children," says Chittapriyo Sadhu, Save The Children's general manager of state programs in West Bengal, which works with the groups. "Save the Children has been supporting these community based groups to develop a strong force towards better child rights governance."

Growing up, Khatoon used to visit mobile learning center on buses run by Save the Children. The buses bring books, notebooks, toys and teachers to help children in Kolkata's slums with little or no formal education.

But Khatoon and her friends realized more help was needed. So six years ago, at age 9, Khatoon founded Shaktimaan, naming it after a popular Indian TV comic superhero because she felt education is a key to empowerment, she says. "Shakti" means strength or energy.

The children Shaktimaan's members help are their own classmates, neighbors, friends and family. They say they uniquely understand why these kids drop out of school — or never begin in the first place.

Many children, for example, drop out of school and have trouble restarting when their families leave their native villages in search of work in huge urban areas like Kolkata.

Six years ago, that happened to 15-year-old Saraswati Kumari Dhanuk. She and her family migrated from her village in Kanpur, in the northern state of Uttar Pradesh, to Kolkata, about 600 miles away. After the move, she didn't enroll in school in her new city. Dhanuk says she simply didn't know how. And the struggle for survival in the illegally occupied slum was so overwhelming that she didn't even consider it.

But once she stumbled across Save the Children's mobile learning centers, she met Khatoon. The kids of Shaktimaan pushed her back into the classroom.

"I just roamed and played about here when I migrated to this place until my friends took me along to study," Dhanuk says.

Now she's a motivated student and member of Shaktimaan.

"It takes half an hour to reach school by train and walking," she says. "Sometimes I am out of money and walk the entire distance. However, I try to attend school on most of the days."

Money is another barrier for many students, says Ashu Saroj, who is 15.

"When the mobile learning centers started visiting, [the kids] enquired why I don't go to school and I told them about the financial problems in my family," says Saroj, who is now part of Shaktimaan. "They talked to my parents and finally enrolled me in a school."

Shaktimaan mainly works in a slum situated on a strip of disputed land sandwiched between a construction site and a cemetery full of trucks. Most residents find work as mechanics, drivers, deliverymen and repairmen, and most are school dropouts. Many local kids work in auto-repair garages helping the mechanics.

Besides holding classes, the group conducts surveys on child marriage and dropout rates. The children break into smaller groups and go door-to-door, noting the number of kids residing there and whether they are in school. 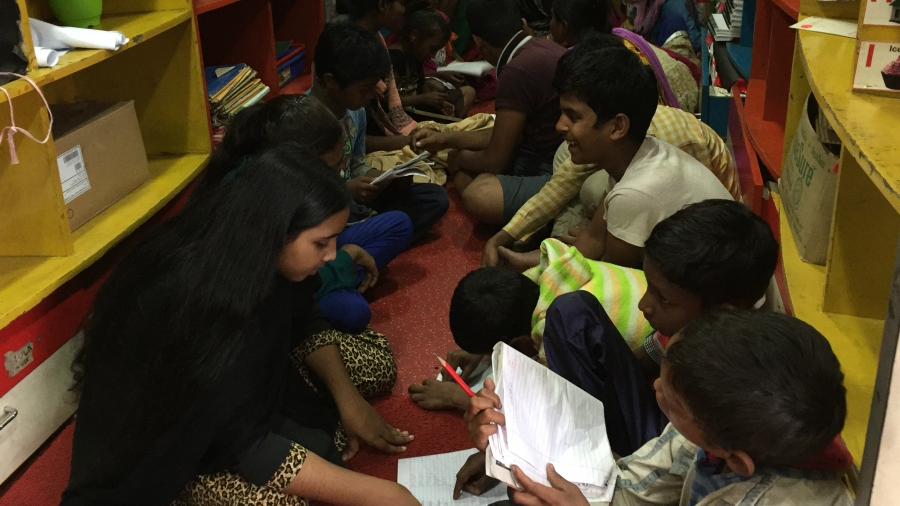 Soni Khatoon, 15, of the Shaktimaan group, bottom right, helps teach children from a nearby slum at a Save the Children mobile learning center. Former child dropouts learn the basics here so they can keep up with the syllabus after being admitted to a formal school.

The group can’t break the cycle of child labor and marriage by talking to child dropouts alone. Parental permission is needed for a child to enroll in school. When parents object, Shaktimaan enlists the help of other community groups and Save The Children.

Prem Passi, a local resident who works as a mechanic, supports the group by trying to convince garage owners to let their youngest employees attend school.

"The kids can now decide themselves the good from bad," Passi says. "Even my daughters have started going to school now."

Still, there are often obstacles even child superheroes can't surmount. Sashi Singh, a teenager who lives in Kolkata's EJC Basti slum, is the eldest of his four siblings. With an alcoholic father, Singh is forced to work at an auto repair garage while his 10-year-old brother Vivek cooks for the family.

Saroj and her cohorts talked him into returning to school earlier this year. But he could only attend for a few months before he was forced to quit in order to care for his siblings.

Child marriage is another obstacle Shaktimaan's members have mixed success in combating.

"One of the girls from our group was married off," says Saroj. "We tried to talk her family out of this, but her mother didn't listen to us. They took her away to their village and married her off there."

Still, there are those they save.

When Shaktimaan learned that some kids are prevented from attending school due to police actions — located on disputed land, slum-dwellers who live in shanties are always at a risk of eviction — the group took action.

"Some of the kids we taught resided near the port area, and the police often come and break their settlements," says Khatoon. "We've decided we will write a letter to the concerned authorities and stop that."