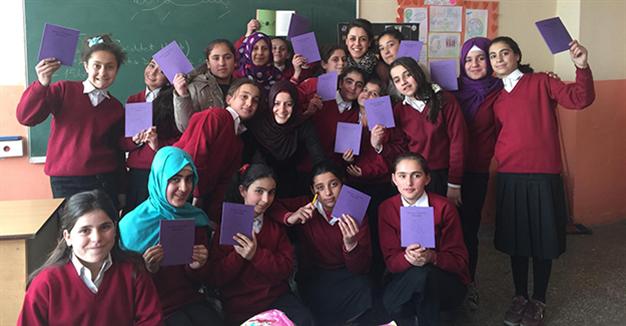 In Deniz Kaynak’s children’s story “Masalını Terk Eden Prensesler” (Princesses Leave Their Fairy Tales), the little bookworm Leyla wakes up on her birthday, only to find that the copy of “Alice’s Adventures in Wonderland” her parents have bought is empty. Leyla and her family soon find out that in a brilliant show of civil disobedience, the fairy tale characters have all left their fairy tales.

In a press conference, Snow White, Cinderella, and Little Red Riding Hood, among other famous children’s heroes and heroines, surprise the world when they disclose the human rights violations they have had to endure for centuries. Snow White apparently has tired of cleaning after the Seven Dwarfs, while the Dwarfs are not happy with their working conditions in the mines. Cinderella wants to go back to school, while the Sleeping Beauty takes on the prince who has kissed her without her consent.

As the story goes, children of the world have to unite to rewrite the fairy tales. “Princesses Leave Their Fairy Tales” was written by Kaynak as part of “Say No to Child Abuse” project, run by the Muş Women’s Roof Association and supported by Sabancı Foundation Grant Programs. Kaynak is one of the volunteers of the association, with a graduate degree in Anthropology. She is one of the founders of 5harfliler.com, a feminist website dedicated to women’s issues. Kaynak has a one-year-old, Leyla, the source of inspiration for the book.

Beyond the happy endings

The “Say No to Child Abuse” project kicked off two years ago to prevent early and forced marriages in and around the eastern city of Muş. Within the project, around 90 school guidance counselors participated in the 16-week training program on women’s rights. These guidance counselors then organized workshops in schools with girls aged between 11 and 18 on children’s rights and the disadvantages of early marriages.

A total of 12,000 girls were reached in the area in two years, with 66 girls’ leaving and early marriages stopped, thanks to the workshops and house visits. The Muş Women’s Roof Association works towards raising awareness about early and forced marriages and femicides, especially through honor killings. They provide trainings for capacity building, carry out research, prepare publications and engage in networking and lobbying activities.

“There aren’t many children’s books with strong female characters who know what they want, who go after their dreams, and that do not fit the traditional gender roles,” Nurcan Çetinbaş, the founder of the Muş Women’s Roof Association, told Hürriyet Daily News. “We thought that we could give the messages we were hoping to give to girls through the ‘Say No to Child Abuse’ project through such a book.”

“In the classic fairy tales like Cinderella, Snow White and Sleeping Beauty, young women’s problems are solved through a prince’s kiss, and they live happily ever after as they marry the princes,” said Çetinbaş. “With this book, we wanted to inspire children on what can happen beyond the happy endings, what women and girls can do for themselves and for one another. We also wanted to provide a platform of discussion through asking the children to think of and write their own endings.”

“When we were working with children, we saw that they were finding more creative solutions to their problems than adults. However, as adults we rarely let children make decisions about their lives,” said Çetinbaş. “The same is true for children’s books.” There wasn’t going to be a competition for alternate endings however the outpouring of endings both from children and the guidance counselors eventually led to the competition. The next edition will hopefully be with the handwriting of the winner, Zehra Göksun.

Çetinbaş maintained that “there are important messages in all of the endings girls have written, such as, ‘We have a say in the important decisions that are made about us,’ ‘We can prove that our imagination is as rich as adults if the chances are given’ and ‘When you marry us, or take our right for education, you also take our lives and dreams.’”

And what are some of the alternate endings? “Little Red Riding Hood heads to the forest every day to feed the sheep, Big Bad Wolf becoming her best friend. The Seven Dwarfs become taller. Cinderella calls a helpline, and returns to school.” The book has come to life with the coordination of Çetinbaş and Ebru Batık, is illustrated by Erkin Gören and designed by Gamze Özer.

The book brings forth some serious issues through classic children’s fairy tales, such as child labor, early and forced marriages, traditional gender roles and environmental rights, leading children on what actions to take in a violation of rights. The book has become popular among NGOs, trainers and educators, as well as parents. Çetinbaş’s words point at the backbone of its popularity: “We believe that we have created a model to show how children, especially girls, need inspiring books on becoming self-sufficient individuals and solving their own problems.”