Note from the editor: This an article that was originally published in in 2005. 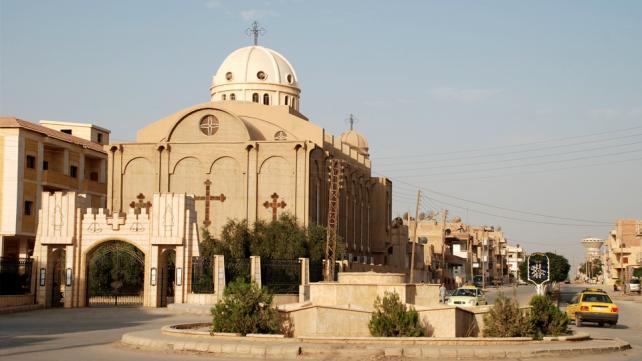 Church bombings have been a terrorist tactic used around the world, and more recently in Iraq. The latest incident occurred on December 8, 2004, when two churches were bombed in the ethnically diverse city of Mosul. Three people were wounded in the attack.

The American bombing of mosques in Iraq and Afghanistan will not help contain Muslim extremists who want to use these images as an opportunity to attack their innocent Christian neighbors. Revenge is unIslamic (please see Quran 22:40). Attacking a house of worship is a sin in Islam and a crime in the eyes of humanity. A Muslim must be just even if in conflict with an enemy. Iraqi Christians are neighbors who have nothing to do with the US military's attacks.

Condemning these despicable attacks on houses of worship is not enough. Muslims must demand that their governments bring strong action against the culprits and provide volunteer guards to protect Iraqi Christians. That is what our Christian neighbors do when a Masjid comes under attack by a Christian fanatic or hatemonger. In our view, those who commit such crimes do not have any faith.

The attack seems to have two motives. The first is to terrify Iraqi Christians and foment hatred between them and their Muslim compatriots. Muslim and Christian Iraqis have been living together peacefully for centuries.

The second could be to link Iraqi Christians to the Americans occupying the country at the moment. Since the war on terror began in October 2001 with the bombing of Afghanistan, punishing the local Christian minority for the actions of the American government has occurred in at least three countries: Pakistan, Indonesia and Nigeria. Now Iraq has joined the list.

Christian groups in Pakistan had been warning authorities that they were facing various kinds of harassment since the September 11, 2001 terrorist attacks and the subsequent American bombing of Afghanistan. This seems to have led to the horrific church massacre on October 28, 2001, where 16 Christians were killed as they worshipped, along with one Pakistani police officer who had been guarding the church.

Similarly, in Nigeria, tribal unrest left hundreds dead in a spate of violence that was followed by Muslim-Christian riots in the area the same year.

Such harassment and violence do not behoove the followers of the Prophet Mohammed, peace and blessings be upon him, who emphasized the importance of protecting and respecting minorities in the Muslim state. The constitution he drafted in Madinah following his migration to the city was unique in that it clearly established the rights and obligations of all parties living in the city, in particular, Jews and Christians.

Under this constitution, Christians, like other religious groups, had the right to not only protection from the Muslim government, but also to freely practice their religion without harassment or violence of any kind.

This example of tolerance, respect and openness did not end with the Prophet's death though. When Umar ibn al-Khattab was Khalifah, he returned tax money collected from Christians in a town in modern-day Iraq after the Muslims had to leave it. The taxes had been collected to ensure Muslim protection of the Christians living there. Since the Muslims could no longer do that, they returned the money.

Given these and many other examples from Islamic history, it must be emphasized that there is no place in any Muslim state for the kind of violence and bloodshed represented by the church bombings in Iraq or violence against Christians elsewhere. The Muslim government and the Muslims of a given Islamic state are obliged to protect and respect Christians and their institutions as a protected minority.

Now is the time for not just condemnation, but also comfort and reassurance in the face of this tragedy. This is especially important with Christmas coming up in less than two weeks.

1. Visit a church in your city and offer your condolences and sympathy if any of the churches in your country have been harassed or attacked. If it is closed, leave a note or a card expressing your regret for the incident.

2. Tell your friends that those Christians are not responsible for the American occupation of Iraq its foreign policies.

3. Tell them that the rights of neighbors in Islam are not restricted to Muslim neighbors only but to all neighbors.

4. If you know an Imam, tell him to give his next Friday Khutbah about the first Hijra of Muslims to a Christian land, Habasha or modern-day Ethiopia. There, Muslims, who were a persecuted minority, found refuge and the freedom to practice their faith.

The Muslim community survived with the generosity, kindness and fairness of the Christian king, the Negus. The Prophet described him and his land in this way: "a king rules without injustice, a land of truthfulness." The Negus refused to hand the Muslims over to the Makkans, who wanted them returned to their native city, and tried to bribe the Negus with gifts and deception about Muslim beliefs. He refused and the Muslims remained protected in his land.

5. If you are an active citizen, make sure your city, state/province and country provide Christians and other non-Muslims their due rights of freedom of religion and nondiscrimination.

6. Establish a fund for the victims of this crime and their families.

1. Encourage your local Imam to discuss this tragedy in his next Khutbah by discussing the Islamic principle of tolerance and respect for other faiths. It is important to remember that while Muslims in predominantly Christian countries like the US struggle for their rights, they must also be concerned about the rights of non-Muslims in Muslim lands. These are enshrined in Islamic law but not always respected by those who are ignorant of Islam's stance on non-Muslim minorities.

2. If you have relatives in the Muslim world, e-mail them these and other suggestions on how to build bridges between Muslims and Christians at this critical time in the country.

3. Have your mosque or Islamic organization continue to emphasize the duties of good citizenship to their congregants. We can help Iraq and America only if we are active citizens relating and connecting to policy makers and opinion leaders. This can ultimately lead to a better understanding of the world and the establishment of laws and practices that protect everyone's rights in our global village.