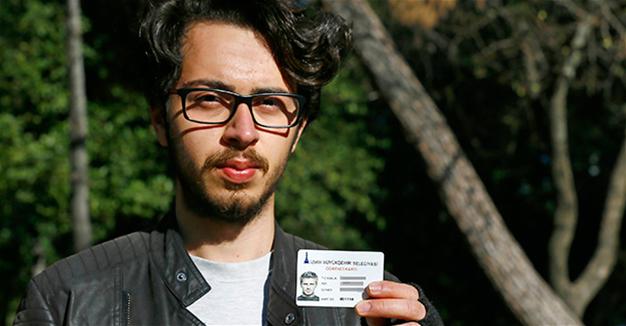 Izmir’s public transport authority, ESHOT, has canceled a number of transport cards after a male student was spotted using retired footballer David Beckham’s picture on his bus card, the authority has said, noting that 40 cards have been canceled on similar grounds.

The male student, L.E.M., attempted to upload his own photograph to the online application system for the bus card, but it was rejected because it was not accepted by ESHOT. L.E.M. then attempted to use Beckham’s picture, this time succeeding.

One of the student’s friends posted the photograph of his card on Twitter, prompting thousands of shares.

A perturbed ESHOT issued a statement about the incident, stating: “Our colleagues working in the card unit that respond to tens of thousands of applications every day have determined almost 40 different applications which used the pictures of Brad Pitt, Adriana Lima, Angelina Jolie, Johnny Depp, Al Pacino, Tarkan, Ahmet Kaya, Ronaldo, Muslera, Volkan Demirel and Mesut Özil. They were all cancelled.”

“L.E.M.’s card, which escaped the attention due to heavy demand, was canceled on Dec. 20. It seems like something that elicits a smile, but it is a false pretense,” it said.

“Mr. Aziz Kocaoğlu has talked about the stealing of roles. If there is a person who steals a role in this province, it is the person who has stolen the mayor’s role for 12 years,” he wrote, referring to comments by Kocaoğlu about actions by AKP lawmakers after the end of a strike involving municipal workers.

A total of 340 workers from IZBAN, a commuter rail system connecting Izmir’s suburban areas with the metropolitan area, went on strike on Nov. 8 due to disputes in collective bargaining talks with their employers.

IZBAN, sometimes referred to as Egeray and owned jointly by the Turkish State Railways (TCDD) and Izmir Metropolitan Municipality, is the busiest commuter railway in Turkey, serving about 150,000 passengers a day, according to the company’s website.