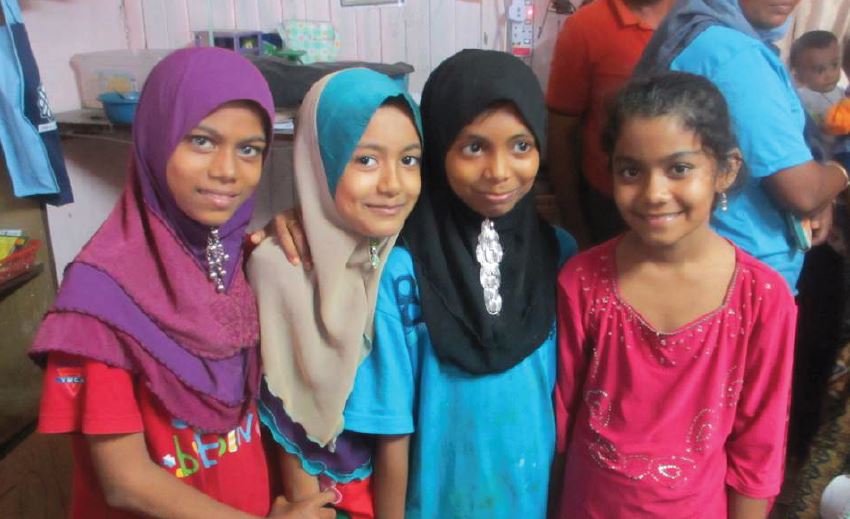 Since gaining independence from the British in 1957, Malaysia has become admired by many. It is a relatively small country compared to its neighbors Indonesia and Thailand, but thanks to various laws, policies and economic incentives, it boasts a slew of successes.

It is also home to around 31 million of people which are made up of various ethnic groups, primarily the Malays, Chinese and Indians.

Malaysia is also where most refugees and asylum-seekers come in a desperate bid for safety and shelter.

Statistics show that as of March 2018, there are some 155, 880 refugees and asylum-seekers registered with the United Nations High Commissioner for Refugees (UNHCR).

Most refugees come here fleeing prosecution in their country, like the Rohingyas, who flee ethnic cleansing in Myanmar. According to the UNHCR, there are 150, 000 of them, though only a third are registered.

There is also a relatively large number of Syrian refugees in Malaysia since the bombing of Aleppo started in 2011.

There has also been a steady flow of unaccompanied minors from Afghanistan, from the ages of 14 to 18, who decide on their own to come here. 10 to 15 such children come to Malaysia per month.

Refugees are not legally recognized in Malaysia. Here, they are regarded as “undocumented” and “illegal migrants.” They are not allowed to work and it is not uncommon to see them being rounded up the police and sent to lock-ups.

Child refugees and asylum-seekers bear the brunt of this injustice.

The International Labour Organization (ILO) created the International Programme on the Elimination of Child Labour (IPEC) in 1992. Under ILO-IPEC, child labor is defined as ““… work situations where children are compelled to work on a regular basis to earn a living for themselves and their families, and as a result are disadvantaged educationally and socially.”

Basically what this means is that children are forced to do the work of adults, often in hazardous situations. These children are harmed and exploited physically, mentally and morally. It harms their well-being. Therefore, child labor is defined as labor that keeps children out of school.

Due to lack of legal recognition, child refugees and asylum-seekers are not allowed to go the national school, while the high cost of private education keeps them further shut out from gaining an education. Those that do study do so in community schools and faith-based educational institutions where usually only English and mathematics are taught.

Parents and children are caught in a web of poverty. Left with dim prospects, many refugee children resort to working to support their family

“We see a lot of refugees and asylum workers below 18 who work in in this country,” the executive director of the Malaysian Social Research Institute (MSRI), Lia Syed, said. Her organization serves refugees and asylum-seekers from 17 countries. Refugees receive education, healthcare and earn a livelihood through the programs at MSRI.

“Refugee children who work usually start working at 14 – they feel compelled to sustain the family or the family forces them to,” she said.

Malaysia’s success in combating its own child labor

In Malaysia, the Children and Young Persons (Employment) (Amendment) Act 2010 does not condone child labor.

The Act does allow some exceptions, such as light work done in family businesses, though children are not allowed to work for more than six hours a day.

Those that flout these rules and exploit children for their labor can be fined and jailed.

James Nayagam, formerly a commissioner with the Human Rights Commission of Malaysia (SUHAKAM) and now the chairman of the children’s rights non-profit organization Suriana Welfare Society, said that Malaysia has been successful in almost eradicating child labor among its citizens.

“The situation has taken a change compared to the eighties, where I dealt with Malaysian children being forced to work in rubber estates and small factories,” he said.

He chalks this success to various reasons: Firstly, all Malaysian parents are mandated to send their children to school. There has also been a greater awareness about child labor.

Furthermore, the employment and income of parents have increased, which means there is less need for children to work to supplement their parents’ income.  Also, there has been more opportunities for children to take up vocational trade.

Malaysian children who do child labor do so in menial jobs such as washing cars, recycle or they work as golf caddies.

What does Nayagam believe will solve the situation of child labor among refugees in Malaysia?

“Provide them an education,” he said.

Lack of political will

Despite pressure from human rights groups, Malaysia has not signed the 1951 United Nations Refugee Convention.  It has also been criticised for not providing a comprehensive set of laws and policies to protect refugees. It has, however, signed the United Nations Convention on the Rights of the Child (CRC) since 1995, which mandates it to protect refugee children with education, but it does not do so.

Every few years, all United Nations member states, including Malaysia, must report to the UN through a process called the Universal Periodic Review (UPR). Two cycles ago, the Malaysian delegates were questioned for not providing education to refugee children. They responded by saying that they allowed non-governmental organizations and the UNHCR to provide the education instead.

This cavalier attitude is damaging. Denied their rights, refugee children have to work, and this include in various jobs: washing cars, washing plates and making food in restaurants, cleaning toilets, distributing leaflets - among other jobs.

Meanwhile, others have to work in malls and some even in construction sites. Some have to work in seedy areas rife with drug use and prostitution. In places such as Ampang, it is a common sight to see Rohingya boys working as beggars, while others become drug mules. Their female counterparts, meanwhile, are sold as brides or prostitutes to Rohingya men.

“Refugees – whether they are children or not – are open to abuse by employers in all kinds of ways. They often work 12 hours a day, 7 days a week, without unpaid leave,” Syed said.

“I don’t see an end to this,” she said, exasperatedly about the situation in Malaysia. “There is no political will.”

Mohani Niza is a journalist and activist in Malaysia. She is also the editor of Muslim World today.