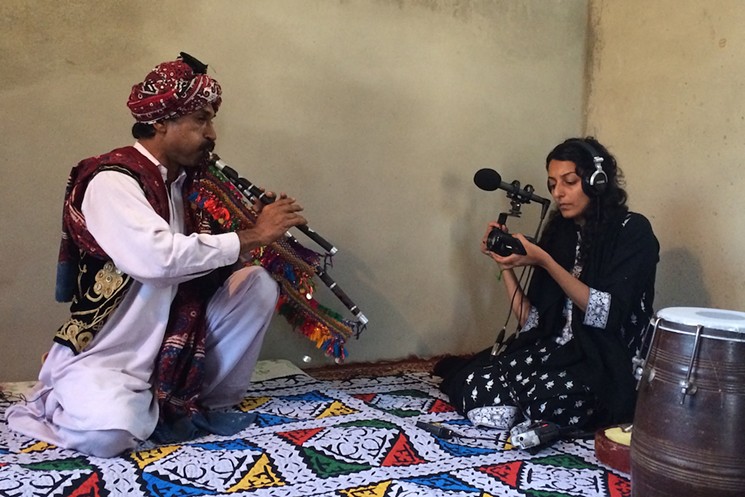 On a chilly day in the winter of 2014, Arshia Fatima Haq sat on the edge of a small, stone concert hall stage in Hyderabad, Pakistan, and placed a digital recorder on a thin rug, a couple feet from a singer named Shazia Tarannum.

“It was the worst place to record, because the ceilings were so high and there was no insulation,” Haq says. But, she adds, “Her voice could cut through an iceberg.”

In the recording, which is included on the album Haq recently compiled — Ishq Ke Maare: Sufi Songs From Sindh and Punjab, Pakistan — Tarannum’s voice sounds as if it’s physically rising toward the rafters, melting through more notes than the ear can hear. The recording betrays the size of the room — a harmonium exhales a spindly figure a few feet away, then tablas gambol forth somewhere closer, loud and brisk, in tension with the heavy release in Tarannum’s singing.If you didn’t know what “Aarfana Kalaam" was about, you might guess — an overwhelming yearning, even lust; the mind succumbing to the quickening beat of the heart.

“Having locked eyes with my beloved, I’ve learnt the lesson of love,” Tarannum sings in Punjabi. "I’ve written this life off, in the name of love."

“It’s about the beloved,” Haq says, "and about losing your mind in the pursuit of love." It's also a devotional — part of a long lineage of Sufi music that finds deep and diverse expression in this part of the world.

Haq is known to nightlifers in L.A. as a DJ (under the alias Aruna Irani) and the founder of Discostan, the popular, long-running series of parties that “present musical narratives from Beirut to Bangkok via Bombay,” as she puts it. The party is both a window to music not often played on the dance floor in L.A. and a labor of love for its cast of DJs.

A still image from the many hours of footage Haq shot while in Pakistan.
Arshia Fatima Haq

But Ishq Ke Maare is even more of a personal project for Haq. The album is a collection of songs she recorded on two trips to Pakistan, pieces she captured that were performed by the respected musicians and wandering ascetics she met during her travels in the Pakistani states of Punjab and Sindh. All the performances presented on the record are part of the broad tradition of the music of Sufism, a term that describes the many strands of mysticism that span the Islamic world. "For these Sufis,” Haq writes in the liner notes, "sound is the gateway to the realm of paradise, the tidal force through which one can attain visaal, or the mystical union with God."

Ishq Ke Maare captures intimate moments Haq experienced with singers and musicians in Pakistani shrines, concert halls and living rooms. Coughing, talking or the low thrum of traffic often are heard in the background, behind performances that balance unwavering devotion with unrestrained emotion, a kind of physically overwhelming desire for holy communion.

Haq was born 1,100 miles away, in another Hyderabad — Hyderabad, India — to an orthodox Muslim family. From an early age, she was captivated by Sufi music, which she discovered via her father’s cassette tapes of qawwali, a form popular in the Indian subcontinent. It’s a full-throated music that doubles as an energetic method of worship — a counterpoint to the strict practices of her childhood.

Haq’s family immigrated from India to the United States when she was 5. In 2001, she moved to L.A., where she earned an MFA in experimental filmmaking at CalArts, and went on to work in film; she also has worked in visual art and experimental sound. In 2012, she founded Discostan.

Not long afterward, the music of her childhood drew her back. In her younger days in India, Haq had nurtured a lingering curiosity about the Sufi spaces on other side of the Line of Control — the border between India and Pakistan — and as an adult, she got the idea of making a film about the colorful Sufi shrines of Pakistan.

In late 2013, Haq crossed from India into Pakistan for the first time; when she got there, she set out with a camera and a microphone to document the shrines of Sindh and Punjab. She traveled to places where adherents perform music spontaneously in spaces that, she found, are remarkably welcoming to all types of characters. “It's like you’re entering an Islamic miniature painting, or a Hieronymus Bosch painting — a dense, allegorical tableau,” she recalls. “When you go into more mainstream spaces of worship, like churches or mainstream mosques, you see all the beautiful sides of worship and faith, and not necessarily the shadows and difficulties. In Sufi spaces, it feels like the positive and negative aspects of experiences are expressed."

She visited a shrine in a town called Bhit Shah, in Sindh, where she witnessed a pouring forth of music on a typical Thursday night. “Friday [is] the holy day for Muslims, so on [Thursday nights] a lot of different conduits are supposed to be flowing through the shrines,” Haq says. “A lot of music happens. At most of the shrines, they perform for seven or eight hours straight. And everyone was open to me recording."

The music Haq recorded is a traditional music, one whose melodies are passed down through generations and whose words are based on quotations from Sufi saints. In performance, those words are uttered feverishly, and the music is stretched and improvised, each moment like a shared epiphany.

The piece she recorded in Bhit Shah, “Shah Jo Raag,” features several singers in a kind of intense musical conversation over a chiming tamboura— all men, but a few sing in a high falsetto, imitating women, their screeching high notes joining together in a kind of wailing chorus before trailing into deep, guttural exhalations. The 18th-century saint who wrote the verses wrote in the female gender, as Haq says, “to represent those who carry the wounds of society."

Haq recorded several styles, including qawwali — raw versions of the kinds of songs she knew in her youth. One of them, the driving "Jo Tera Gham Na Ho,” credited to Kalyam Shariff Qawwali Troupe, features roiling tabla, billowing harmonium and a chorus of devotees singing verses, up from their bellies. But she also recorded kalaam, like the Shazia Tarannum piece — sung verse delivered in a more solitary, soul-baring fashion — as well as other styles specific to the regions she visited.

"I did record some people who are really well known in Pakistan," Haq says. "But those people, even though they’re really talented musician and singers, didn’t end up on the record. For me, it was more about finding what people are listening to."