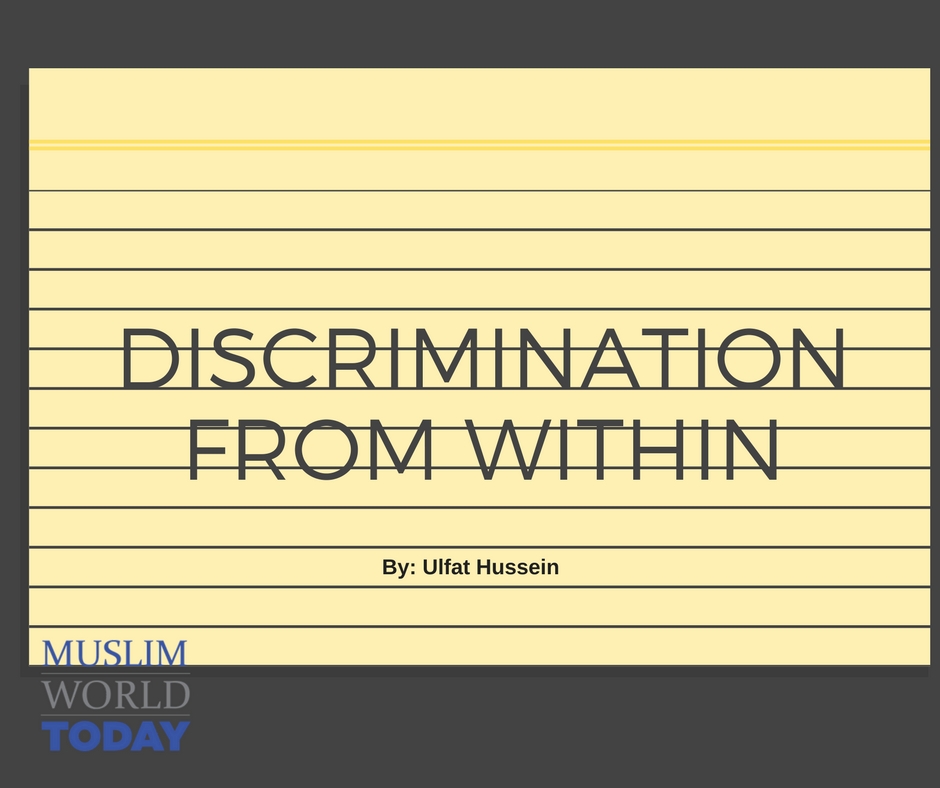 The term, “discrimination,” is very unheard of in religious communities. Actually, people rarely acknowledge it unless asked to speak about it. But some fear to speak about it freely/openly because they fear being expelled from the community or the religious institutions they are a part of. And, not because what they speak of is incorrect or a lie, but because by speaking freely, they have exposed something negative about the community to the outside world.

In Islam, this mentality exists in several sects. Now, these groups are not influenced by religion alone. They are also influenced by their personal norms grounded in culture, local customs or even personal preferences, they want to perpetuate as the mindset of Islam as a whole, which basically spoils the reputation of the whole institution of Islam, itself.

The divisions lead to divisive decisions, as well as opinions. Hence, all this causes conflicts of interest that eventually lead to insecurity issues in the community. The main source of insecurity globally is the lack of respect of different opinions of people from other sects, and vice versa, and also creates an inferiority complex.

Arab Muslims segregate themselves from African Muslims. The Asian Muslim community also keeps itself separate. is the same the wondering factor is why this is happening and the leadership sucks it in without considering the umma i.e the people. The People are the most important component in this whole scenario. If the people are mentioned in the preamble of the constitution of Kenya then there must be very privileged in the eyes of God despite their background. The suffering group of people are the less privileged people in the society, i.e. the poor marginalized people, the old, the young and the needy too who will speak for this group of people if God brought who is human to subject them to social injustices and inhuman acts? Who is to blame? Religion or the people in power?

In Christianity, man has been mentioned in the book of Genesis and in the Quran, man is mentioned severally. This shows how human beings are privileged by God himself. Muslims in this modern era have put back the history of how we should live but adapt to their own and systems as they may seem fit to there that is not true religion as it’s engulfed in inhuman practices that are assumed to be religion.

When will these social injustices end, and who will speak against them in a loud voice as they speak concerning scriptures. Religious leaders as much as they shun bad characters in the religious world. Why and when did the role of religious leaders change in this world?

Let us all pick our roles very well in the society and speak volumes in our actions love each other as the way Jesus loved the adulterous woman and forgave her so who are we not to forgive?