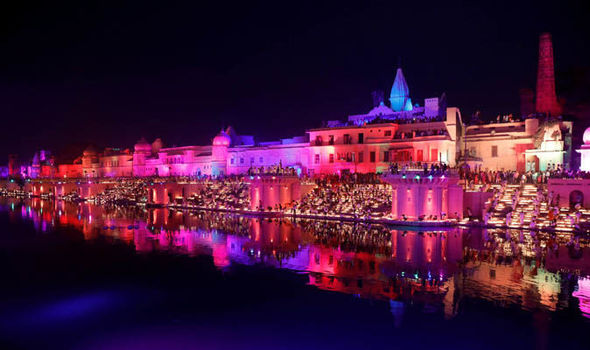 The magnificent scenes were captured during the Diwali festivities in the northern Indian city if Ayodhya.

301,152 lamps glistened simultaneously for five minutes beside the Sarayu river.

The record-setting event marks another historic moment for the city, which is already famed in Hindu culture.

The god Rama is believed to have been born in Ayodhya, one of the religions most sacred cities.

The Hindu festival of Diwali, also known as Deepavali, takes place across five days in the seventh month of the Hindu lunisolar calendar, Ashwin.

The festival is embraced by Hindus, Sikhs and Jains around the globe.

This year, Diwali occurs between November 5 and 9, with the main celebration on Wednesday, November 7.

The celebration is also known as the festival of lights and commemorates Rama-chandra - the seventh incarnation of the god Vishnu - returning to his people following 14 days of exile.

During his exile, it is said Rama fought and defeated the demon king, Ravana.

The festivities of Diwali symbolise the victory of light over darkness, good over evil and knowledge over ignorance.

How is Diwali celebrated?

Each of the five days of Diwali have a different meaning.

Day one - Dhanteras - marks the beginning of celebrations.