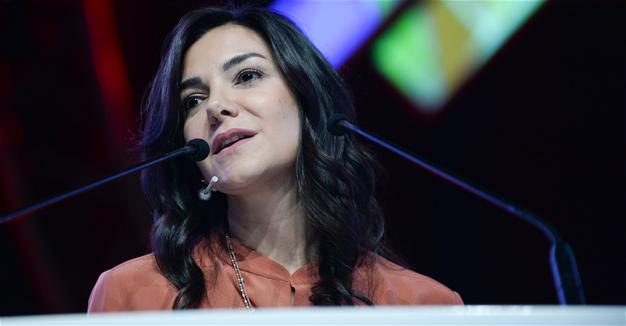 Doğan Holding Chairwoman Begümhan Doğan Faralyalı has called for unity behind Turkey’s common values, emphasizing the significance of widening an environment of “trust and good intentions” based on “commonalities and shared values."

Speaking during the Crystal Apple Festival in Istanbul hosted by the Advertisers’ Association, Doğan Faralyalı announced the launch of the new “Shared Values Movement” project by Doğan Holding, which owns the Hürriyet Daily News.

“Polarization in Turkey, ongoing for a while, has come to a point where it affects our daily lives. We have become unable to talk about the core of any issue. As a society we need to recall and develop the glue that ties us to each other,” Doğan Faralyalı said, referring to a recent survey carried out in Turkey.

Doğan Faralyalı noted that the social and political unity in the days after the July 15 coup attempt marked an “exception” to the dominant polarization in Turkey.

“The common attitude we put out as a nation in the aftermath of the coup attempt showed that democracy is our common value. This is a very important attitude that needs to be sustained for our national unity,” said Doğan Faralyalı, adding that it was disappointing that a coup attempt was needed in order to “remember our shared values.”

She said the new “Shared Values Movement” project was the result of a year of work aimed at making “shared values discussed, remembered, cared for and progressively developed throughout Tukey once again.”

The ultimate goal is to “gather around a dream of Turkey in which we take power from our commonalties and our differences become our richness.”

Giving an example of Turkey’s “shared values,” Doğan Faralyalı referred to “a slim-waisted glass of tea and simit , helping whoever is in need, neighborhood, and compassion.”

“A police officer from Adana, a prosecutor from Gaziantep, and a housewife from Istanbul” all want similar things for their children, she added. “If we start the path from good intention and trust, we can dream of a common Turkey that all of us would want to live in.”

Elaborating on the details of the project, the Doğan Holding chairwoman said they received very positive initial feedback when they started asking people across Turkey: “What are our commonalities?”

The results of the research will be published on Oct. 29, National Republic Day, Doğan Faralyalı said.