As we commemorate the International Day for Elimination of Violence against Women on Nov. 25, it may be time to recognize forced marriages, particularly the forced marriage of underage girls, as one of the most deplorable forms of violence – and an act that forces girls into a life time of violence and abuse. 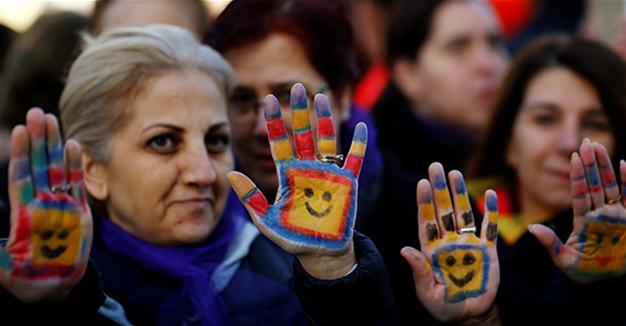 Protesters show their painted hands during a protest against a proposal that would have allowed sentencing in cases of sexual abuse committed "without force, threat or trick" before Nov. 16, 2016 to be indefinitely postponed if the perpetrator marries the victim, in front of the Turkish Parlaiment. REUTERS photo

It was the 1980s when a strange girl from the Black Sea appeared in my grandmother’s home in Ankara. S., a 15-year-old village girl with a lopsided face, looked as if she could run away any moment; she never talked. She was kidnapped and raped by a village boy, we, the kids, were told... The boy was in love with S.’ sister and wanted to kidnap her, but in the dark, he mistook S. for her older sister. Nevertheless, he raped her at night and in the morning, he said he would marry her.

But S.’ mother, a courageous and creative woman, stood against it. She did not want to see her daughter in the grave as a victim of an honor killing nor as a rapist’s wife. She also knew that her daughter, no longer a virgin, would be harassed endlessly if she stayed in the village.

So she begged my grandmother, the family matriarch, to take S., who later took sewing lessons. Today, some three decades later, S. is an accomplished tailor and is very happy, married to the man of her choice. All it took was one mother who refused to bow down to tradition and disagree with the village’s common thought that "better married than dead… Or, God forbid, a prostitute."

As we commemorate the International Day for Elimination of Violence against Women on Nov. 25, it may be time to recognize forced marriages, particularly the forced marriage of underage girls, as one of the most deplorable forms of violence – and an act that forces girls into a life time of violence and abuse.

In the course of the last week, Turks from many different political views took to the streets in protest at a bill that aimed to pardon men convicted of statutory rape (sex with an underage girl) if they marry the girl.

When the bill was withdrawn in the face of protests, Justice Minister Bekir Bozdag expressed his regret. Throughout the debate, he and the other supporters of the bill painted a sad picture before our eyes – an unhappy, impoverished woman with children whose "husband" was in jail because "he did not know that it was a crime" to have sex with an underage girl: A romanticized picture of a perfectly happy marriage that would be interrupted by the new, tougher penalties on sex with minors. Surely, the critics said, if there was the consent of the girl (ah, that dodgy concept of consent under which you cannot buy a beer if you are below 18, but can consent to marry the man of your family’s choice), a pardon should be issued so that the young couple could live happily ever after.

Let’s take a look at those "happy teenage weddings," then. Often, underage marriages are the first steps in a long cycle of violence. "When you ask a woman who has been on the receiving end of a long history of violence how it all began, she often replies that the first act of violence came when she still had her wedding dress on," said Professor Dr. Akça Toprak Ergönen, a doctor who works with victims of violence against women. "There is more physical and sexual violence in marriages where the bride is married off before 18.

According to a 2014 study conducted jointly with the Family and Social Affairs Ministry and Hacettepe University in 2014, here is the link between abuse and early marriage:

• The percentage of women who are victims of domestic violence is 48 percent among women who were married before 18. The same figure is 31 percent among those who marry after 18.

• 19 percent of women who were married before 18 have experienced sexual violence, compared to 10 percent among married after 18.

• The last report from Committee for Elimination of Discrimination Against Women (CEDAW) says that the recent Constitutional Court judgment decriminalizing a religious ceremony that was not proceeded by a civil marriage may provoke an increase in the number of child marriages and polygamy.

According to these figures, it is rather difficult to believe that, had the law passed, the majority of men who would be saved from jail were the Herod in some sort of Romeo and Juliette or kids in love who ran away in amorous consent but could not marry because they were too young.

Rather, the profile would be a mature man, who possibly "bought" the girl-bride from her parents, without as much as asking for her consent, got an imam to make the union "locally acceptable but with absolutely no civil rights for the so-called wife" and, one out of two, led  her into a life of sexual and physical abuse.

I don’t know about you, but this is absolutely the sort of man I want to see behind bars, along with the family who sold their underage daughter or let her marry her rapist, as well as the imam who conducted the religious wedding ceremony.