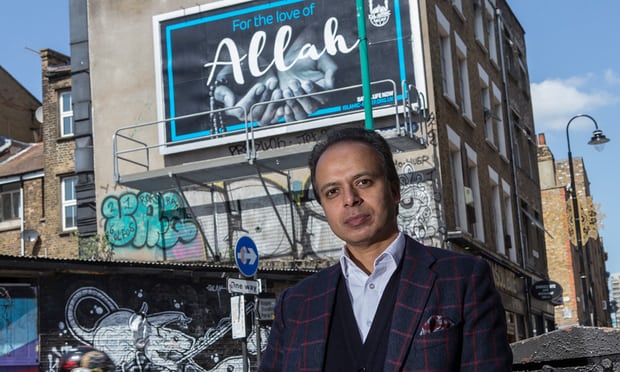 The house of Islam is on fire and its Muslim arsonists must be expelled. So comes the provocation from Ed Husain, self-proclaimed former Islamist radical, who puts much of the blame for Isis, Syria, Hamas and beyond on Saudi-sponsored Salafism and the export of Wahhabism across the world. “We can’t blame the rest of the global neighbourhood for the fire we’ve lit in our own home,” he says, in an empty Brick Lane cafe on the first morning of Ramadan.

Through writing his new book, an attempt at condensing a global history of Islam, Husain arrives at the logical, albeit frequently observed, conclusion that the spread of this rigid, literalist interpretation of Islam “rejected by the vast majority of Muslims and imposed on them” is the biggest threat to the religion. The solution? To defeat the ideology.

Exactly how the battle of ideas can be won is not so clear, but one proposal from Husain is takfir: to publicly expel terrorists and jihadists from the faith rather than to allow any suggestion that they are martyred.

The trouble is that Islam comes in diverse forms and sects, without a central institution to thrash out theology or articulate universal doctrine. Husain optimistically judges that this could be done via a “Middle Eastern Muslim Union”, a Marshall-plan-type programme funded by “the economic capital that God has blessed the Gulf with”, to be “deployed through investment and redistribution to address the difficulties across the region”.

The point is to engage with extremist ideas. “We make the mistake of seeing the world in physical entities,” he says. “With Isis it has always been about ideas. It’s not so much a caliphate, it’s an expansionist fascist mindset.”

This much most of us agree on, but surely Isis losing so much territory is a significant moment? “If that was the case, then we should have seen the decline of the Taliban in Afghanistan. What we saw with Isis was a desire for recreating a caliphate that was ever stronger, but there is no military victory here. It is a mindset that has to be criticised, undermined and thrown out.” As he puts it, “throughout Muslim history there have been periods where problematic, subversive ideas have been expressed” but the ability to challenge them “is missing in civil society currently”. A considerable weight of responsibility, in Husain’s view, rests on the shoulders of so-called moderate or liberal Muslims to “defeat [ideas] on campuses, bookshops, mosques, publication houses, the internet”.

Husain says that during the course of writing his book he has had the ear of “several Muslim prime ministers, three presidents, several princes – people in charge of tens of thousands of clerics – and millions of people following very prominent Muslim scholars”. His background is in thinktanks; his speciality is in “the thought space”, which saw him founding the counter-extremist organisation Quilliam in 2007 with Maajid Nawaz, and going on to the Council on Foreign Relations in New York before a stint at the Tony Blair Faith Foundation. He is both “unashamedly Burkean and conservative with a small c” and a practising “Muslim believer, proud of my heritage and proud of my faith”. He is at pains to emphasise Islam’s history of rich and liberal diversity, its sensuality and flexibility being at odds with the rigid puritanical form that currently dominates.

“Here in the UK, we have 20,000 Muslims being monitored. Twenty, ten, five years ago that wasn’t the case.” Several years ago, Husain advocated on behalf of the government’s Prevent programme, and declared that spying on British Muslims, whether they were suspected of committing crimes or not, was morally right as “the alternative [would be] to let the buggers do what they wish, until they appear on the violence radar, which is too late”.

He makes no apology for his work with Quilliam, “taking money from British taxpayers to help support British security”. To him, it’s clear “Islam doesn’t have a problem; Muslims have a problem. The body of ideas that want to control the state and take halal and haram to a legislative level and impose it, that remains a problem”.

For a century and a half, says Husain, Muslims have struggled politically with defining their place in the modern world. “Where we have done that is in our place in the west, where 20 to 30 million of us have come to terms with our minority status, with democracy, pluralism, the rule of law – we don’t have to be the powering elite,” he says.

“Our Muslim cousins have yet to come to terms with how as believers they can reconcile with a secular nation state. Many of our extremist Islamist types haven’t, and that’s why they demand control, whether it’s Iran or the Muslim Brotherhood in Egypt.”