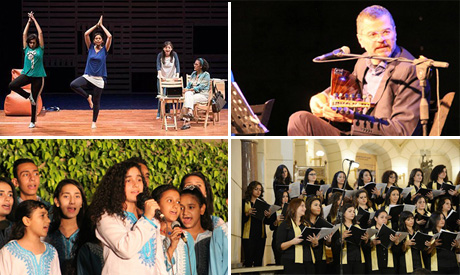 Kawalees (Backstage), a play written and directed by theatre arts specialist Dalia Basiouny was performed between 13-16 May at Falaki Theatre and again between 2-4 June at Rawabet Theatre.

“The initial inspiration for this project,” writes Selaiha, “was the famous 1936 American play Stage Door, which was later made into a movie. Written by George S. Kaufman and Edna Ferber, it tells the story of a group of hopeful, starry-eyed young women who live together in a big house in New York City, sacrificing comfort and security just to be near enough to Broadway to audition for the opportunity of getting into the profession even in a minor, or just a walk on part.”

“In Kawalees, which presents the last week of rehearsals for a new independent theatre production, written and directed by two women friends, Basiouny reads against the American text, using Stage Door's as a springboard to dramatise the struggle of women theatre-makers in Egypt, particularly those who, like herself, work on the fringe,” she adds.

“While the American play rarely questions or critiques the theatrical establishment in any fundamental way and the struggles of the women center on just getting into it on whatever terms and bending to its rules, in Kawalees the women artists tear the theatrical establishment to pieces and strive to create an alternative theatre of their own where they are in control and express themselves without commercial pressures, male domination, societal censorship, or oppressive cultural codes.”

As Selaiha sees it, the "interplay of the characters, their stories and relationships weave a moving, heartening and often darkly funny story about success and failure, love and ambition, comradeship and human perseverance. In it, the personal and artistic are intertwined to show the resilience of women and how even when knocked over the head and emotionally bruised and battered they can spring back to continue the struggle.” 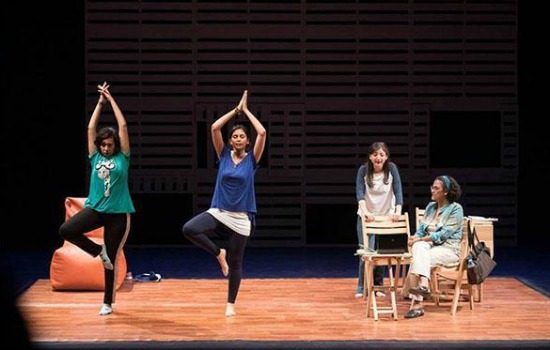 Kawalees (Backstage), a play written and directed by Dalia Basiouny was performed between 13-16 May at Falaki Theatre and again between 2-4 June at Rawabet Theatre. (Photo: Al-Ahram Weekly)

Lebanese oud master, musician and singer Charbel Rouhana delivered a concert at the opening night of this year’s 2016 Hayy Festival, which took place on 12 June at El-Genaina Theatre at Al-Azhar Park.

Rouhana brought his latest yet musical project Tarab Safar, or the World Music Ensemble – to the Cairene audience. The project is an amalgam of music compositions as well as songs featuring selections from the repertoire of 12th century Sicilian-Arab poet Ibn Hamdis al-Siqilli.  The concert featured Rouhana on vocals and oud, Nidal Abu Samra on keyboard, Thomas Hornig on saxophone, Elie Chemali on bass, and Fouad Afra on drums.

Tarab Safar, a music wonder in its own right, takes the signature sound of Rouhana, fusing oriental music and jazz a step further, exhibiting a bolder fusion of this harmony and leaving us buoyant about the future of the Arab music library.

The project, Rouhana told Ahram Online in an interview conducted hours before his Cairo concert, was inspired by this idea of travelling within one’s own self.

“The most difficult yet beautiful kind of travel is that on which you embark within yourself. It is a difficult and painful undertaking, but if you succeed at it, you’ll feel a state of nashwa (euphoria) and tarab (ecstasy through music). This state of safar (travel) also brings you face to face with new people. You see, this two-word title—tarab safar—could be discussed in a whole book,” explains Rouhana.

Rouhana embarked on his musical vocation in the 1980s, joining Lebanese oud master and musician Marcel Khalife’s first band, Al-Mayadeen.  For the next three decades, he molded his music repertoire, pursuing two paths in parallel: the making and performance of music on the one hand, and a career in academia on the other hand.

At the heart of Rouhana’s project is his interest in preserving and disseminating the Arabic music repertoire while attempting to leave his own imprint through state-of-the-art oriental jazz. 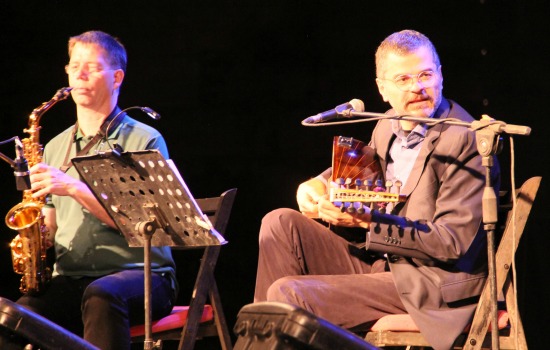 Cairo Celebration Choir (CCC) gave Egypt’s premiere of Ludwig van Beethoven’s Mass for soloists, chorus and orchestra in C major, Op. 86 at the All Saints Cathedral on 16 June. The event included yet another Egyptian premiere – Zur Namensfeier overture in C major, Op. 115 – that was later repeated in Basilique Cathédrale on 17 June.

The choir was joined by an orchestra and four soloists: soprano Mona Rafla, mezzo soprano Jolie Faizy, tenor Amr Medhat and bass baritone Reda El-Wakil. With Beethoven’s Mass in C Major Op. 86, the choir has carved its name into the annals of Egypt’s musical history.

Performing the pieces in two of Cairo’s churches added a unique flavour to the event.

We meet the choir, the soloists and the orchestra as a single body that lives and breathes as one, sharing each segment of the composition. There are no long arias and no stars of the evening; no one shines above another, as all performers are an integral part of the grand musical architecture.

Founded in 2000 by maestro Nayer Nagui, the Cairo Celebration Choir consists of over 100 members. Their repertoire includes western classical works and also compositions by Arab composers, arranged by Nagui.

In 2012, the choir participated in the Czech Republic's Prague Voices 2012 Festival, winning the Silver Level Diploma.

In July, CCC will represent Egypt at the 9th World Choir Games in Sochi, Russia.

The CCC will be the only choir representing Egypt and will compete in the Folkloric category with a compilation of folk songs from one of their iconic repertoire elements, Aghani Bel Arabi.

The choir will perform songs by late Egyptian composer Sayed Darwish arranged by maestro Nayer Nagui. The songs include Telaat Ya Mahla Nourha, Ya Balah Zaghloul, El Helwa Dih/Zourouni medley and Ya ward Ala Foll we Yasmin.

This will be the choir's first 35-member journey; previously, travelling in such a big group had been impossible with support from the governmental and private entities. 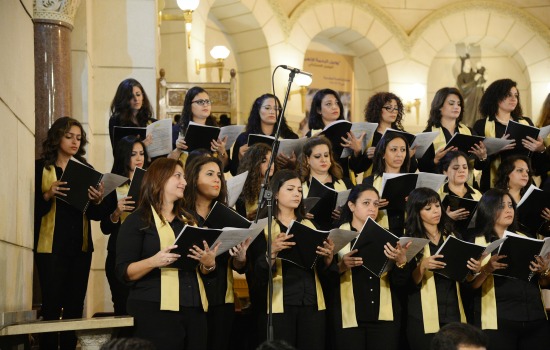 On 20 June, the Talaat Harb Cultural Centre presented a very special ensemble: a children's choir from Upper Egypt.nThe evening was part of a number of Ramadan cultural events organised by the Cultural Development Fund.

During their performance at the Talaat Harb Centre, the choir was accompanied by a group of oriental musicians. Divided into three music segments, the evening opened with songs for Egypt and was followed by a special selection of music for Ramadan.

Finally, the choir performed songs that were handed down to them by previous generations or sung by their grandparents, a lovely insight into the music heritage of their region.

The choir, which is managed by the Upper Egypt Association for Education and Development (AUEED) came to Cairo from Minya, a city located 250 kilometres south of Cairo.

Established in 1940 by Father Henry Ayrout, this non-profit association provides education and development services to four main zones of Upper Egypt: Minya, Assiut, Sohag and Luxor.The choir is one of the many projects in which the association seeks to educate children and young people through music.

Read our story with photos from the performance here. 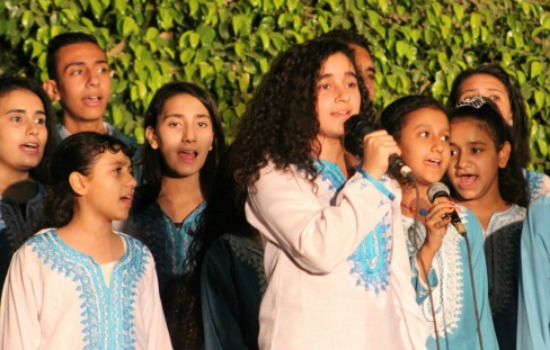 Yalalan Group for Music and Singing, a 12-member Palestinian troupe, delivered a concert on 22 June at the Cairo Opera House’s open-air theatre.

Throughout the concert, which was organised by the Palestinian embassy in Cairo, Yalalan took the audience on a journey that commenced in Palestine and travelled across the Arab world, showing how music can transcend the ugliness of Israeli settler colonialism, and reminding us that Palestine, despite the decades-old occupation, will always be just one song away.

Yalalan concluded their Egypt tour on 24 June, with a concert at the Bibliotheca Alexandrina.

Founded in 2005, Yalalan delivers covers for songs that speak to its members’ “grievances and thoughts, including nationalist songs, muwashahat (singular: muwashah, a genre of classical Arabic music that came to light in Al-Andalus, now southern Spain), as well as selections from the Arabic musical heritage, especially focusing on the period of the 1920s and 30s,” Mahmoud Awad, the group’s co-founder, manager and one of its three main vocalists, told Ahram Online in an interview conducted one day before their Cairo concert.

The group thus works to “disseminate the Palestinian and Arab musical tradition as a unified voice while they transmit their artistic and national message,” read the description section of the group's official Facebook page.

Read our interview with Yalalan here. 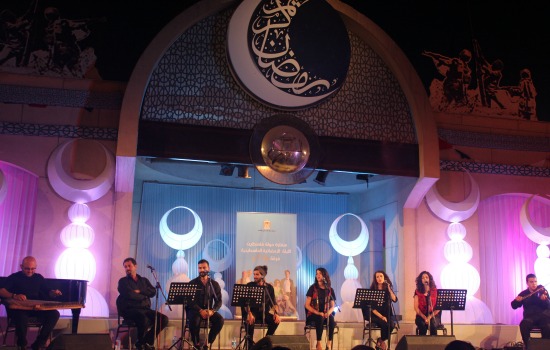 For more arts and culture news and updates, follow Ahram Online Arts and Culture on Twitter at @AhramOnlineArts and on Facebook at Ahram Online: Arts & Culture