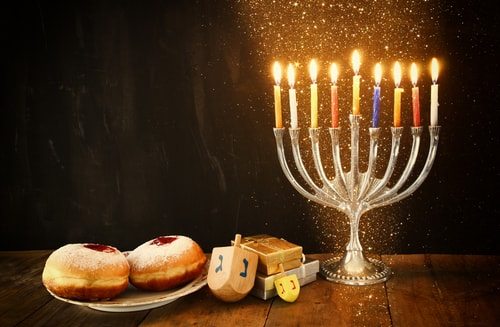 The Hallmark Channel recently announced that it will be airing its first-ever Hanukkah-themed movies in 2019. As a connoisseur of its Christmas offerings, I couldn’t be more thrilled, but I’m also a little apprehensive. Sure, this is an opportunity for the actresses who always play the main character’s “ethnic-looking” friend to finally shine in a leading role, but could this ultra-goyishe network really capture the Jewish experience in all its joy and angst? To that end, I respectfully offer these can’t-miss concepts for what I hope will become Hallmark’s “Eight Nights of Hanukkah” programming:

Lucky Letter Gimmel
Rachel Goldstein runs a third-generation artisanal dreidel-crafting business. Times are hard because of Amazon, but she remains committed to creating beautiful works of art that families can cherish and pass along to their children. Her business was recently bought by a big toy conglomerate whose CEO is Jacob Wexler, a handsome but cold Harvard MBA. Jacob, noting that Rachel’s business is losing money, insists on coming to observe her and introducing measures to improve efficiency. Rachel is scandalized when Jacob suggests removing the letter “nun” from the dreidels (because, in his words, it would reduce costs by a quarter and the “nun” doesn’t do anything anyway), and she teaches him an important lesson about appreciating Hanukkah miracles. Jacob learns there’s more to life than just accumulating gelt, and they fall in love and discover the true meaning of Hanukkah.

The Sufganiyah Switch
Chaya Blumenthal recently achieved her dream of opening a bakery. However, her parents think she is wasting her nursing degree from the University of Pennsylvania. She wants to prove them wrong by winning the annual contest for Best Sufganiyot but is nervous because last year, her sufganiyot came out disastrously. Not wanting to take any chances this year, she travels to Brooklyn to enroll in the Kosher Culinary Academy, which is run by the haughty Avi Stein. They immediately clash because Avi wants every sufganiyah to be exactly the same, while Chaya wants to give hers a little personality. But as Avi comes to recognize Chaya’s talent and Chaya comes to appreciate the value of Avi’s insistence on consistency, she soon reaches the next level in her baking … and in her feelings for her teacher. With Avi’s help, she is able to overcome a dirty trick played at the last minute by her rival in the contest, and they fall in love and discover the true meaning of Hanukkah.

All I Want for Hanukkah Is You
Arielle Berkowitz is one of the top songwriters in the biz, but she’s stumped by the greatest challenge of all … writing a genuinely good Hanukkah song. She decides to take a trip to Tzfat to clear her head and find inspiration. But when she arrives, she finds that her Airbnb was double-booked with a soulful candle maker, Isaac, who is feeling stressed because of the pre-Hanukkah candle-making crush and wants to take a vacation. Arielle is initially concerned that Isaac’s presence will distract her from her songwriting, but he teaches her to allow the holy spirituality of Tzfat to imbue her art. With the help of special guest stars the Maccabeats, she writes a new Hanukkah classic, and they fall in love and discover the true meaning of Hanukkah.

Oil Vey!
Rebecca Friedman is a no-nonsense kosher caterer who’s focused on growing her business and doesn’t have any time for love. Her new client is a lonely widower named Ari Cohen, whose wife recently passed and who wants to give his daughter the best bat mitzvah ever. At first, Rebecca is put off—the idea of catering a Hanukkah bat mitzvah, with no meat and all that oil, is way outside her comfort zone. But as she gets to know Ari and his sweet, shy daughter, Malky, she finds herself falling for both of them, and she becomes equally determined to give Malky the bat mitzvah party of her dreams. There’s a last-minute disaster when there’s not enough oil to make the latkes; will the bat mitzvah be ruined, or will a Hanukkah miracle pull them through? Rebecca and Ari work together to save the night, and they fall in love and discover the true meaning of Hanukkah.

Queen Esther
Occupational therapist Esther Green is deliriously in love with her boyfriend, the handsome, British-accented David Rosenfeld. When he proposes on the first night of Hanukkah, she thinks her happiness is complete. But after she accepts, he reveals a family secret: He’s the prince of the kingdom of Kislevia! This tiny but charming principality was long the only European kingdom ruled by Jews, and an ancient law states that the prince must wed a Jewish girl by the last night of Hanukkah during his 30th year in order to assume the throne, so as to assure royal continuity. Now Esther will have to let out the Jewish American Princess that lives inside, but will malign forces inside the kingdom prevent her from achieving love and destiny? As they light the menorah each night, her and David’s love grows with the light, and they fall in love and discover the true meaning of Hanukkah.