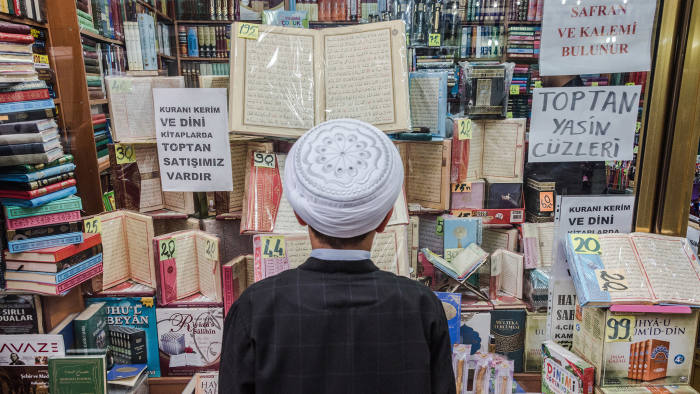 For the 100th week running, parents stand with protest signs in front of Ismail Tarman, a public middle school that caters to students aged 10 to 14, in the midst of a battle between advocates of religious and secular education in Turkey. “We are here until the injustice is over” reads one of the signs held by the protesters who have been fighting for two years against the “Islamisation” of their children’s school. The protesters say the highly rated school of 1,100 students in the wealthy Levent area of Istanbul was transformed from secular to religious overnight without the consent of parents. Those against the change collected 970 parent signatures, demonstrated and pleaded with government officials before eventually applying to a local court to reverse the change. A ruling was expected as this newspaper went to press. “I want to teach my religion to my child. I don’t want the government to do it,” says Bengu Bozkurt, an activist parent and one of 14 petitioners in the case. Despite objections, the administrators forged ahead with the changes and now the fifth and sixth grade years, with starting ages of 10 and 11, are studying under an Islamic curriculum at Ismail Tarman with boys and girls segregated. The seventh and eighth grades, with starting ages of 12 and 13, remain under the previous co-ed school system. Parents backing the religious shift want the protesters banished. Hatice Badem, a stay-at-home mother of three, stands in front of the school after the final bell. Ms Badem says she would like her 12-year-old daughter, who wants to become a pilot, to attend a religious school so that she can learn about Islam as well as science and mathematics. “I don’t know why these other parents are turning their backs on religion,” Ms Badem adds. “Turkey’s 99 per cent Muslim. They should just accept it.” The case is one of several across the country where parents are fighting to stop the creeping transformation of public schools — which have been secular since the republic’s birth in 1923 — to imam hatip or “imam preacher” schools. They say the country’s basic principle separating state and religion, implemented by its modernist founder Mustafa Kemal Ataturk, is under attack. But President Recep Tayyip Erdogan has shared his intention to create a “pious generation” that espouses Islamic values alongside Turkish nationalism. Mr Erdogan graduated from an imam hatip school in Istanbul.

The ministry of education declined to comment, but its minister Ismet Yilmaz told CNN Turk TV in April that parents had a choice in sending their children to imam hatip schools, and that while their numbers were growing, they remain a minority. “Is everyone going to imam hatips? That’s an exaggeration,” he said. “We envision the rate going to imam hatips will be 23 per cent . . . We are not forcing anyone to do anything.” The education ministry has pointed out that imam hatip schools cater to a minority of students © Diego Cupolo for the FT Still, billions of dollars have been poured into religious schools and universities under the Islamist government of the Justice and Development party. The number of students at imam hatip schools has grown fivefold since 2012 to 1.3m, across 4,000 schools, according to Reuters. Since the foiled 2016 attempt to overthrow President Erdogan, the government seized the private Gulen schools after their exiled spiritual leader, Fethullah Gulen, was accused of masterminding the coup. Hundreds of those have since been turned into imam hatip schools. Religious schools specialising in one subject, such as science or fine arts, are planned. Despite the investment, imam hatip graduates are lagging behind in academic performance, according to data from the education ministry. Religious scholars and Mr Erdogan have also expressed outrage at reports that some imam hatip schools have instructed students in deism (the belief in a creator who does not intervene in the universe) instead of Islam, stoking fears of western influence. Imam hatip schools have been a niche part of Turkey’s public education system since the country’s founding but graduates were denied opportunities such as working in the military until last year. Previous Kemalist governments shut down imam hatip schools during periods of political unrest. Imam hatip backers say secular schools are transformed into religious ones when parents request the change in specific neighbourhoods. Halit Bekiroglu, the director of Onder, the oldest imam hatip alumni association, says the curriculum of these religious schools includes critical thinking. “I would be happy if an imam hatip student discusses deism, atheism and different sects of Islam because one of the most important aspects of education is to question everything.” He says the model of western education imitated in Turkey is not enshrined in its culture, and also argues that imam hatip schools reduce religious radicalisation. The 35-hour weekly curriculum for both secular and religious schools beginning in middle school includes the same subjects such as science and literature. But six hours of elective studies in secular schools which may include art, music and physical education, are replaced with Arabic and Islamic lessons in the imam hatip curriculum.